The season is now getting into full swing and we are on to our fourth event of 2014. Burhill has been a regular on the tour for the last few years, but last year was my first time playing the PGA EuroPro event and it resulted in a fifth place finish over the New Course.

Burhill holds lots of good memories for me personally having qualified for the Faldo Series Finals way back in 2002 over the Old Course and then having the first sessions of the Team Faldo elite squad at the 36 hole complex. Having the opportunity to spend time with a six-time major winner on a 1 to 1 basis, was an incredible experience.

Which takes me back to my first golfing memory, which was when Sir Nick overcame Greg Norman to win the 1996 US Masters, that Sunday night back in 96 was when I decided I wanted to be a Professional Golfer.

Working on my swing with Sir Nick

So as you can imagine, I was looking forward to this event more than any other and to go with that all my practice was starting to show on the course. I made the 220 mile trip down to the course on Monday and played the course, as this was the only opportunity I would have as I wasn’t in this weeks pro am. The course looked exactly how I remembered it, but this year the rough was a little thicker and the course had to withstand relentless amounts of rain over the previous days, but somehow the course was still immaculate.

I was hitting the ball well and happy with things and so, on Tuesday I spent the day working on a few things to get me ready for the tournament. Days like these are great when the practice facilities are so good.

With an early morning tee time on day one it was chance to post a good score early, I didn’t get off to a great start, bogeying my second hole of the day, but I managed to keep the round going and picked up a further 3 birdies over the course of the round to finish with a two-under 70. This left me three shots of the lead and just outside the top 10 at the end of the day.

It was a strange day as I didn’t feel as I had played that well, but at the same time I missed a few chances to improve my score. 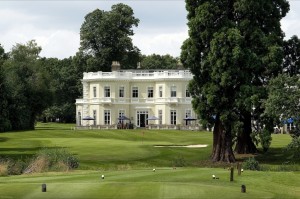 The 18th hole at Burhill

With an afternoon tee time for round 2, there was plenty of time between rounds, so I was able to get some more work done on my game. I made a good start to the round by birding the 2nd but I gave this gain back on the 3rd with a bogey and it wasn’t until the 9th hole that I started to make a move with a birdie, which was followed by further gains on 10, 14 and 16 to get me to 6 under and 2 off the lead in 3rd place. Unfortunately I would go on to drop 3 shots over the closing two holes, with a lost ball on 17 and a 3 putt on 18. Despite this finish I was round in 71 and moved up into the top 10 going in the last round.

The last round started off just as I wanted by picking up birdies at the first and third to make my move towards to the top of the leaderboard again, unfortunately I couldn’t sustain this and I would wind up shooting 75, after dropping 3 shots over the closing 4 holes.

Again there was a number of positives to take from the week, having played a lot of good golf throughout the week and being up and around the top of the leaderboard for the second week running.

Now there is a week off before a 3 week stretch of tournaments, so I am going to continue working hard on my game in that time and get in some quality work in the gym, to improve my fitness levels. This should help in eradicating the slow finishes.