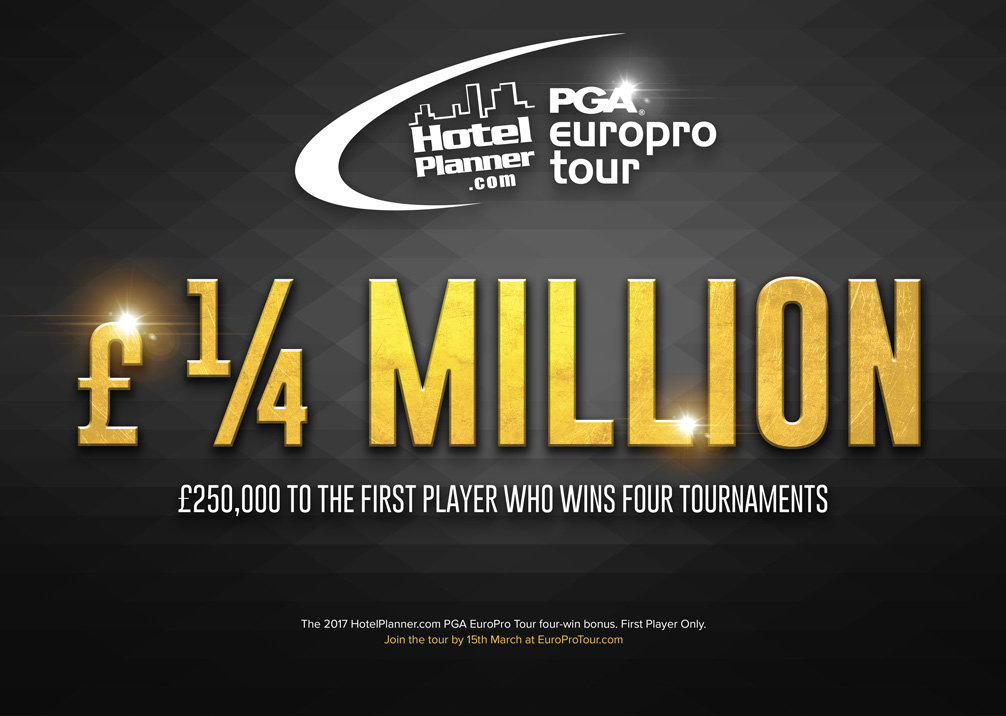 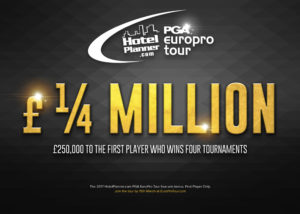 The HotelPlanner.com PGA EuroPro Tour will pay a quarter of a million pounds (£250,000) bonus to any player who wins four tournaments on the 2017 schedule.

This exciting bonus has been made possible by tour title sponsor HotelPlanner.com, along with Matchroom Sport and takes the total prize money available this season to £1.2million.

The announcement follows the news that one player could walk away with £100,000 if they can find an ace in a new Hole In One Shoot Out at Cumberwell Park this June.

The quarter of a million pound bonus will be paid as a reward to the first player who wins four tournaments on the 2017 schedule, including Tour Championship but excluding any Qualifying School wins.

The 2017 season kicks off at Close House in April, the first time the PGA EuroPro Tour will play the same course as the European Tour in the same season. The tour continues with 14 further 156-man tournaments at the likes of Luton Hoo Hotel, Golf & Spa, East Sussex National and the historic Montrose Links. The season will conclude in October with the big-money Tour Championship, where the seasons top 60 will have one final battle to finish inside the Order of Merit Top Five and earn promotion to the Challenge Tour.

Tim Hentschel, CEO at HotelPlanner.com said: “We know the road to £1/4 million will be an exciting ride. In addition, HotelPlanner is planning on giving away thousands of pounds in free hotel rooms to the fans on our Facebook page. This will be a great year for the players and the fans.”

Barry Hearn, Chairman of Matchroom Sport and the EuroPro Tour said: “Ever since we started 15 years ago, the PGA EuroPro Tour has been about finding and rewarding winners.

“Over the years we have had numerous players go on to win on the European Tour, win majors and play in Ryder Cups. But nobody has ever won four tournaments in one season. We are throwing down the gauntlet; if any of our fantastic young players can win four times this year they will be rewarded with £250,000.”

Daniel Godding, Director of Operations for the HotelPlanner.com PGA EuroPro Tour said: “This is one of the most exciting things we’ve ever done on the tour and I can’t wait to see it play out through the year.

“At this stage of their careers a quarter of a million pound would remove a lot of pressure and there is no doubt that someone who can win four tournaments will be deserving of such a great reward.”

Offering direct access to the Challenge Tour through the final Order of Merit, HotelPlanner.com PGA EuroPro Tour players will compete for £1,200,000 of prize money in 2017, with the top five golfers at the end of the season awarded a category on the 2018 Challenge Tour.Providing vital experience of life on tour, players will compete in 15 main events at some of the UK and Ireland’s premier golfing venues.

The season concludes with the Tour’s top 60 players contending the Tour Championship. Players qualify to play on the HotelPlanner.com PGA EuroPro Tour either through a two-stage Qualifying School in the spring, or thanks to their 2016 achievements.

£100,000 Hole In One Shoot-Out At Cumberwell Park Announced