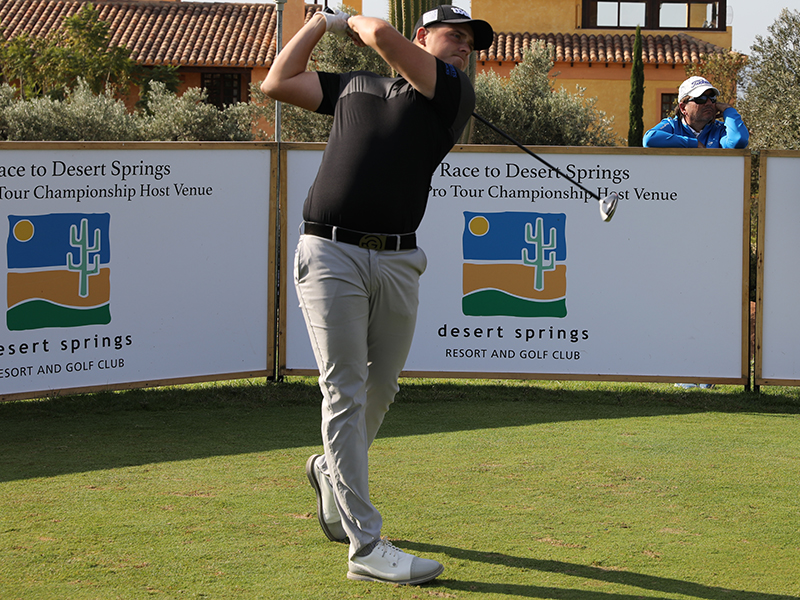 James Allan will take a shot lead heading into the final round of PGA EuroPro Tour Championships 2019 at Desert Springs Resort after a solid second day.

Victory for Allan (Chelmsford Golf Club) will see him climb to the top of the Race to Desert Springs rankings to clinch a Challenge Tour card and the PGA EuroPro Tour 2019 title.

He was three back from overnight leader Mikael Lundberg at the start of play but made light work of the course in windy conditions signing for 68 (-4) and -9 overall.

Allan explained: “I got away with a couple of tee shots into the desert but I recovered well, my putting was very good today! It was tricky as the wind was swirling around a fair amount so had to be committed to lines/yardages which I did well!”

As it stands it’ll be Allan, Richard Mansell, Marco Penge, Alfie Plant and Andrew Wilson who take the top five but that is, of course, subject to change based on the final day of play tomorrow and European Tour Q School final stages.

Ben Ferguson (The Vines) followed on from his 67 yesterday with a 69 (-3) to be second outright with five birdies to his name and it could’ve been better if it wasn’t for a double bogey on the back nine.

The best round of the day came from Oliver Clarke. The White Rose Management golfer shot 64 (-7) to move up from level to tied for third with Luke Joy (Remedy Oak/Yas Links Abu Dhabi) who has put together rounds of 68 and 69 so far this week.

Clarke speaking to John E. Morgan after the round said: “The putter was the difference. Yesterday I played solid didn’t miss many fairways or greens but wasn’t holing many points. I was five-under front nine (today). The front nine there wasn’t much wind but on the back nine, there was.”

There were good rounds for Daniel Young (Kingsbarns Pro Academy), Robert Burlison (Enville Golf Club), Conor O’Neil (Pollok / Mearns Castle) and Tom Gandy (Rowany Golf Club)  who are all tied back at sixth. Young the best of the bunch with 68 (-4).

Elsewhere, Ryan Campbell (Falkirk Golf Club) pulled himself back from a first-day score of 75 (+3) to 66 (-6) on day two for one of the best cards of the day to climb to -3 and tied seventeenth.

There will be a redraw this evening ahead of the final round of play tomorrow where it’s make or break for 2019.