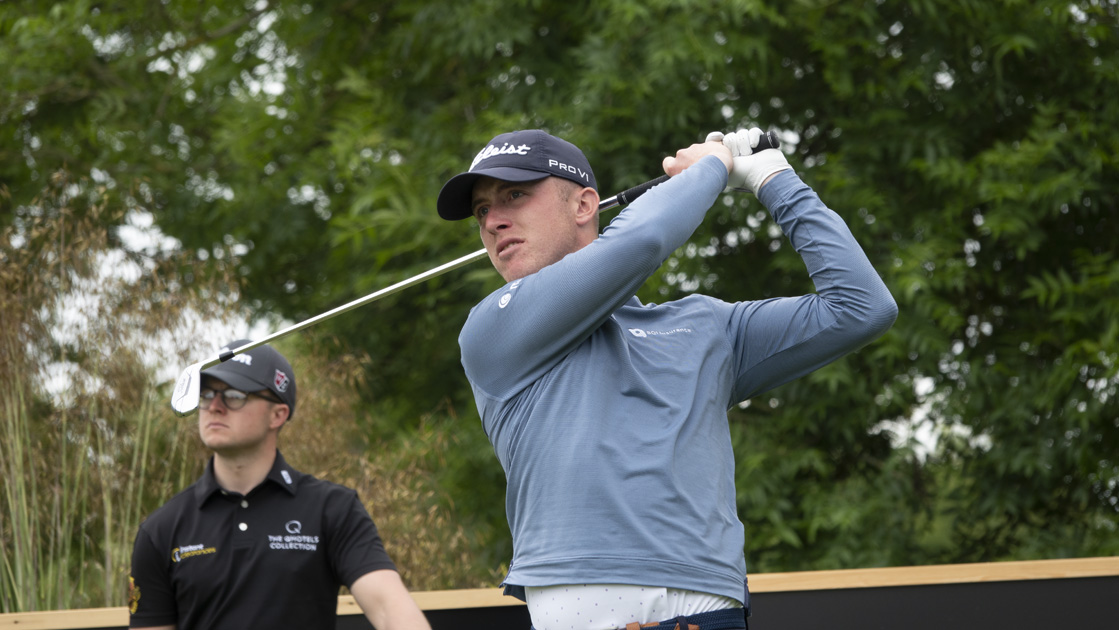 The mightily impressive Benjamin Jones has earned a two-stroke advantage heading into the final round of The QHotels Collection Championship.

The rate of scoring failed to emulate the opening day, but we did have one 66 (-6) from Chris Gane, who has catapulted up the leaderboard.

Benjamin Jones is the man to beat however, as the Englishman backed his stupendous 66 from yesterday with another score in the sixties – this time 67.

Starting from the 10th tee, he picked up an early birdie to elongate the momentum that was so present throughout Wednesday’s display.

The Hunting course’s closing stretch is one of the most difficult on tour this season; Jones negotiated those tricky three holes with a score of -2.

Two more birdies were quickly secured at 2 and 3, but he did three-putt from close distance to give one back begrudgingly.

His ability to remove minor mishaps must be applauded, as he responded perfectly by birdieing the following hole.

Nicholas Poppleton is the man closest to him, and he too will be thrilled with a round of 67 (-5).

Having carded 68 yesterday, this is Poppleton’s greatest chance of victory since the new season unveiled.

Five birdies and an eagle had him soaring through the pack, but a bogey at both 9 and 18 will leave a sour taste in his mouth.

A steady morning was rewarded with three birdies, although a dropped shot at the 10th keeps him at distance from leader Jones.

Conor White and Bailey Gill are on -7 for the tournament and they will both be looking to apply pressure to Jones early into tomorrow’s final round.

The latter was the overnight co-leader and he managed to narrowly build his tournament score, although he would have liked to score more efficiently on the front nine (his back) after coming home in 36 (E).

White, on the other hand, played terrifically all day and plotted his way around for a fantastic score of 69 (-3).

Three players are currently tied for 6th, with Reece Samson, Ryan Brooks and Thomas Thurloway all in the hunt tomorrow.

All three shot under par for the day, with both Thurloway and Samson carding 69.

Brooks will be delighted with his comeback however, as his front nine score of 40 (+4) looked destined to remove him from contention.

The Englishman is also the highest placed golfer who has been crowned champion this year, and one more win should be enough for Challenge Tour status.

Chris Gane and Mark Young make up the top 10, and they have a combined score of 62 (-10) today, which highlights just how impressive the duo have been.

As aforementioned, Gane is the proud owner of the lowest score of the day.

Young enjoyed a bogey-free round, which is unbelievably impressive considering just how much danger lurks around this difficult golf course.

Four birdies pushed him into the top 10 and he looks set to record his best finish of the season.

There are a total of 46 players under par, whilst the cut line is locked in at level; 52 players will progress into Friday’s finale.

Tomorrow will be dominated by showers, which could cause disruption to some of the field’s flow.