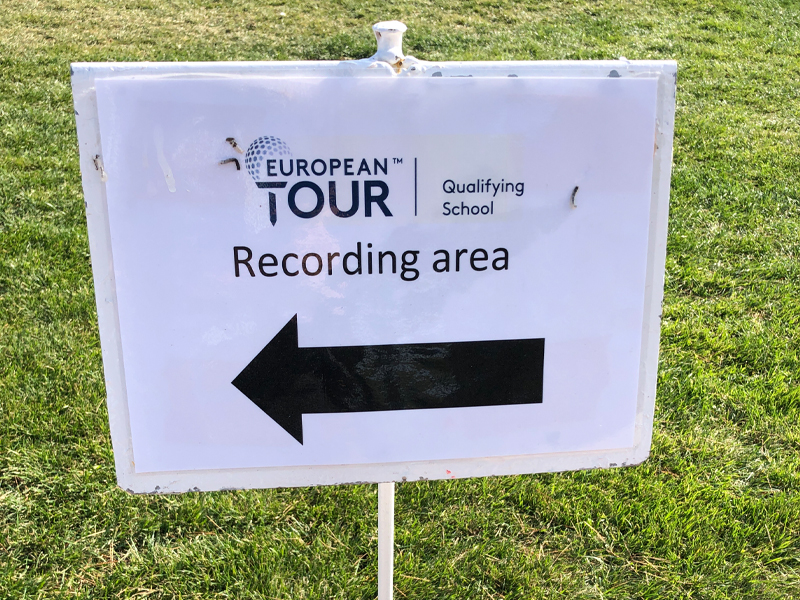 Only one more round separates PGA EuroPro Tour players past and present from one of the twenty-five European Tour cards on offer at European Tour Qualifying School Final Stage, Lumine Golf Club.

Gandy bounced back from a double bogey on 12 to birdie two of his next three to go level for the day heading down 18 where the Isle of Man golfer held his nerve to sink an eagle moving two under and nine under total taking him up to tied twenty-fifth.

He has shown consistency throughout Q Schoo but the eagle on eighteen was the third time he’d broken par on either of the courses last holes this week.

Caldwell showed the same fighting spirit with a birdie on eighteen to sign for a 69 (-2) too after a bogey on 17. The move saw him take up tied twenty-fifth heading into the final round.

The former Walker Cup player was steady throughout to see him go under par for the fourth time this week and give him a real fighting chance of securing the elusive European Tour card.

The group clearly bounced off each other with Canter moving inside the top fifteen after a 66 (-5) which would’ve been flawless if it wasn’t for a bogey on one.

Niall Kearney was one of the biggest movers after his best round of the week so far going four under for a bogey-free 67 to take him up twenty-nine places to tied thirty-second. It’s been a case of producing when it mattered most with days of 71, 72, 70, 69 and 67.

The Eagle Orchid Scottish Masters winner Daniel Young showed his steel with a bridie on the last hole for 67 (-4) after an earlier set back to move up with Kearney to be tied inside the top forty for his best round of the week too.

David Dixon struggled to get things going after an imperious few days with a card of 75 which meant he dropped to fortieth.

Armitage Pick of the Bunch

Marcus Armitage is the best-placed PGA EuroPro Tour alumni at tied fourth with another fine day of golf for 69 (-2) with a birdie on eighteen which saw him jump up several places.

Meanwhile, last year’s order of merit winner Dave Coupland showed his ‘Mr Consistent’ status with his fifth under par round of the week to sit inside the top twenty. Dale Whitnell is tied with Caldwell and Gandy carding a 70 (-1) whilst Jordan Wrisdale is tied with Kearney and Young on eight under. Daniel Gavins is tied forty-seventh and Minkyu Kim is tied sixty-ninth.

The leaderboard is congested wherever you look with no fewer than twenty-four players sandwiched between ten under and seven under. A difference in winning a European Tour card or not.

Kearney and Canter have illustrated how players can turn their fortune on its head with one solid round of golf and with only one round left it’s set to be a gripping finale.

At the top, Benjamin Poke holds a two-shot cushion over Sami Valimaki and four shots over Frenchman Adrien Saddier.