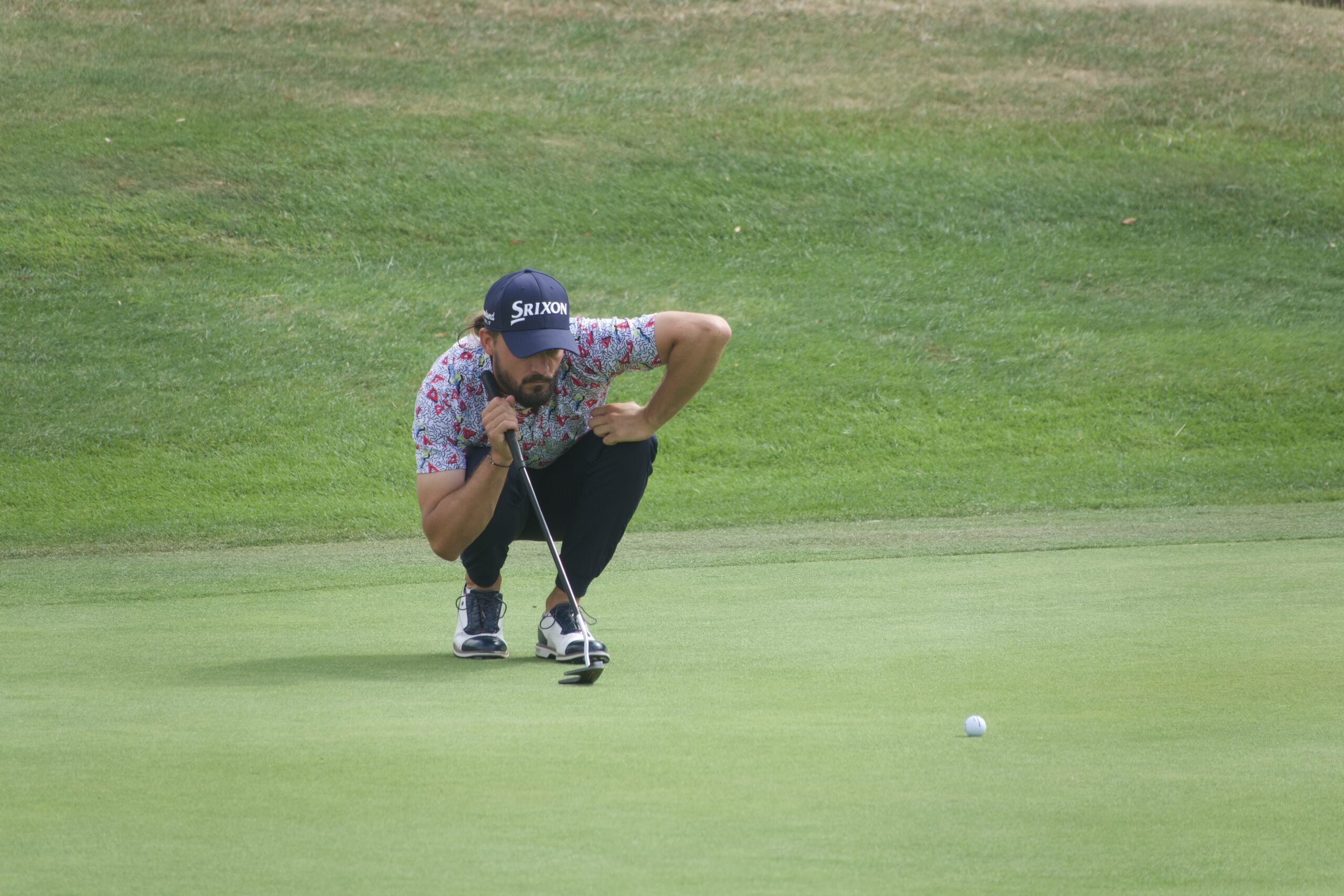 Brandon Robinson-Thompson demonstrated his class once again as he takes a slender, one-stroke advantage into the final day with him.

The Englishman missed the first cut of his season at Belton Woods Hotel, Spa & Golf Resort last week, and he has clearly used that as motivation to carve a golden opportunity for himself.

Robinson-Thompson has been knocking on the door for quite some time, epitomised best by his T2 finish at Abridge Golf & Country Club – which Pavan Sagoo eventually won.

The golfer, who represents Prime Talent Group, started his tournament with a two-under 70, creating a platform for a charge on overnight leader Stuart McLaren.

Whilst McLaren failed to build upon his overnight lead, Robinson-Thompson shot a round of 66 (-6) to pip the Scotsman to the 36-hole lead.

The leader carded two eagles at the 2nd and 16th, with two birdies sandwiched between.

McLaren will still be delighted with his position heading into the final round, but he may rue an uncharacteristic front nine.

Looking to separate himself from the field, a double bogey at his 4th hole wasn’t part of the plan, but a birdie at 8 looked likely to settle the ship.

Another dropped shot indicated that it could be that kind of day for the overnight leader, but three consecutive birdies from 10 – 12 ensured he made it back-to-back rounds in the red.

Whilst the leading duo will be elated with their positions, the best round of the day belongs to neither of them – a certain Joe Brooks has the Thursday bragging rights.

His impressive display is best summarised by his putt on the 9th and his 18th hole of his day.

Having found the greenside bunker, the 26-year-old splashed out and had an intimidating 15-feet for par at the last.

He confidently strolled up to the ball, put a terrific stroke on it and from the moment it left the face, it looked destined for the centre of the cup.

In total, Brooks carded two eagles, six birdies and two bogeys, which results in him tying the course record alongside Dermot McElroy – who shot 64 in the final round of last year’s event.

James Wilson is the other golfer sat at six-under for the tournament, and he too will be ecstatic with his afternoon.

Starting the day at even par, due to the low scoring nature of yesterday, he was always in this golf tournament.

What the Englishman needed was a solid round of golf – and that’s exactly what happened.

He made the turn at 35 (-1) as two bogeys threatened to undo the work of a trio of birdies through his opening nine holes.

The back nine kicked him into life however, and three consecutive birdies from 10 – 12 was supported emphatically with two more at 15 and 16.

Two players are in T5 and both Robin Williams and John-Ross Galbraith will be dreaming of a maiden PGA EuroPro Tour title tonight. Stuart McLaren is also looking for his first EuroPro victory

Robins’ 67 (-5) included six birdies and a sole birdie, and he is now in a fantastic position to cause trouble for the leaders tomorrow.

Galbraith himself made five birdies and only dropped one shot all day; he’ll be hoping to improve his best seasonal finish of T6.

Langley, who represents Trinifold Sports Management, would have liked to build on his 69 (-3) from yesterday, but a two-over front nine (38) delayed his early progress.

He burst to life during the latter half however, carding four birdies for just one bogey to give himself a good chance heading into Friday’s finale.

Hawksby, on the other hand, will take increased confidence into tomorrow, following a terrific 68 (-4).

An eagle at the 10th was the highlight of his round, but he’ll also be happy with the fact he only dropped two shots around a tricky golf course.

James A Wilson and Pavan Sagoo complete the top 10; the duo will be hoping for fast starts if they are to cut into the five-shot deficit they currently face.

The cutline was at two-over, which is the joint highest of the season – accompanying Donnington Grove Golf Club, which is not bad company to be part of.

Remarkably, and rather annoyingly, rain is forecasted for the entire duration of tomorrow’s play.

Make sure you keep an eye on our Facebook and Instagram channels tomorrow, as we will be reporting extensively throughout the full day.