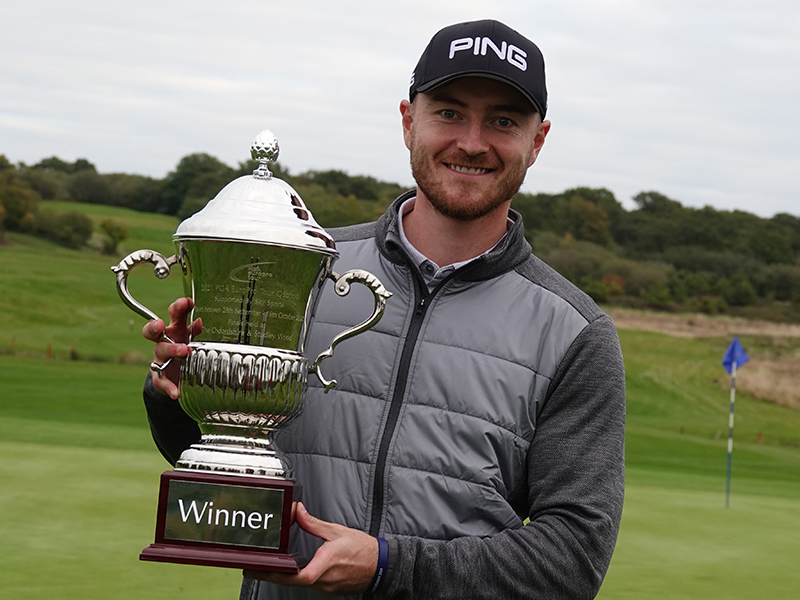 Sam Broadhurst produced a final round 64 (-9) to win Q School 2021 supported by Sky Sports. In a week that was draining on all fronts, it was Broadhurst who prevailed with rounds of 67, 67, and 64 across The Oxfordshire and Studley Wood Golf Club to win by five shots.

Thirty players plus ties have earned the top category available at Category 3 with players 31–60 and ties getting category six. 61-80 and ties category 10. Ten under was enough to secure category three. Full categories for those who missed the cut can be found here.

Broadhurst has looked at home all week and finished with a fine birdie, birdie, eagle to end a week which sees him bag a win that alumni such as Tyrrell Hatton and Jack Senior have previously claimed: “It’s been really good. Quite a stressful time, obviously everyone is trying to get their cards for next season. I found my putter and kept rolling them in.”

David Hague (Malton & Norton Golf Club) produced the joint lowest round of the week with a 64 (-9) bogey-free final day to take solo second place rounding off a solid 2020 which started with his first professional win. Hague relished playing in full tournament conditions again: “Five days on the spin is pretty tiring when you’re not used to it and had a year off. I’ve enjoyed it!”

Two familiar names finished one back from Hague with Jack Yule (King’s Lynn Golf Club) and Paul Maddy (Gog Magog Golf Club) with solid final day 65s to get category 3 under their belt. Chris Croucher (UTP Management) was also one back.

It was some story for Scotsman Rory Smith (Dalmahoy Golf Club) who started first stage at The Players Club nine over thru 6 before bouncing back to play the next 30 holes better than anyone else to make the cut. Smith continued his ‘never say die’ mentality with a top ten finish this week signing for days of 68, 69, and 69.

Smith added: “I’ve grown with the attitude of never give up and never give in. Just try and grind something out. I was two off the cut after the first day.”

John Henry (Clydebank & District Golf Club) made the biggest movement of the day sailing to tied ninth with a 65 (-8) taking advantage of the par 5s going five under for the day on them.

Leon Fricker (Yelverton Golf Club) and Cameron Raymond (St. Annes Golf Club) completed the week with 66s (-7) to shoot up the leaderboard with both bogey-free. Rodi Vlasveld (The Dutch) was also in the 66 club on the last day to move up 35 places.

The 2021 season gets underway in May at Luton Hoo Hotel, Golf & Spa and the full schedule can be found here. We wish all players good luck in the remainder of what’s left of 2020.

Tour looks ahead to 2021 with sustainability at forefront