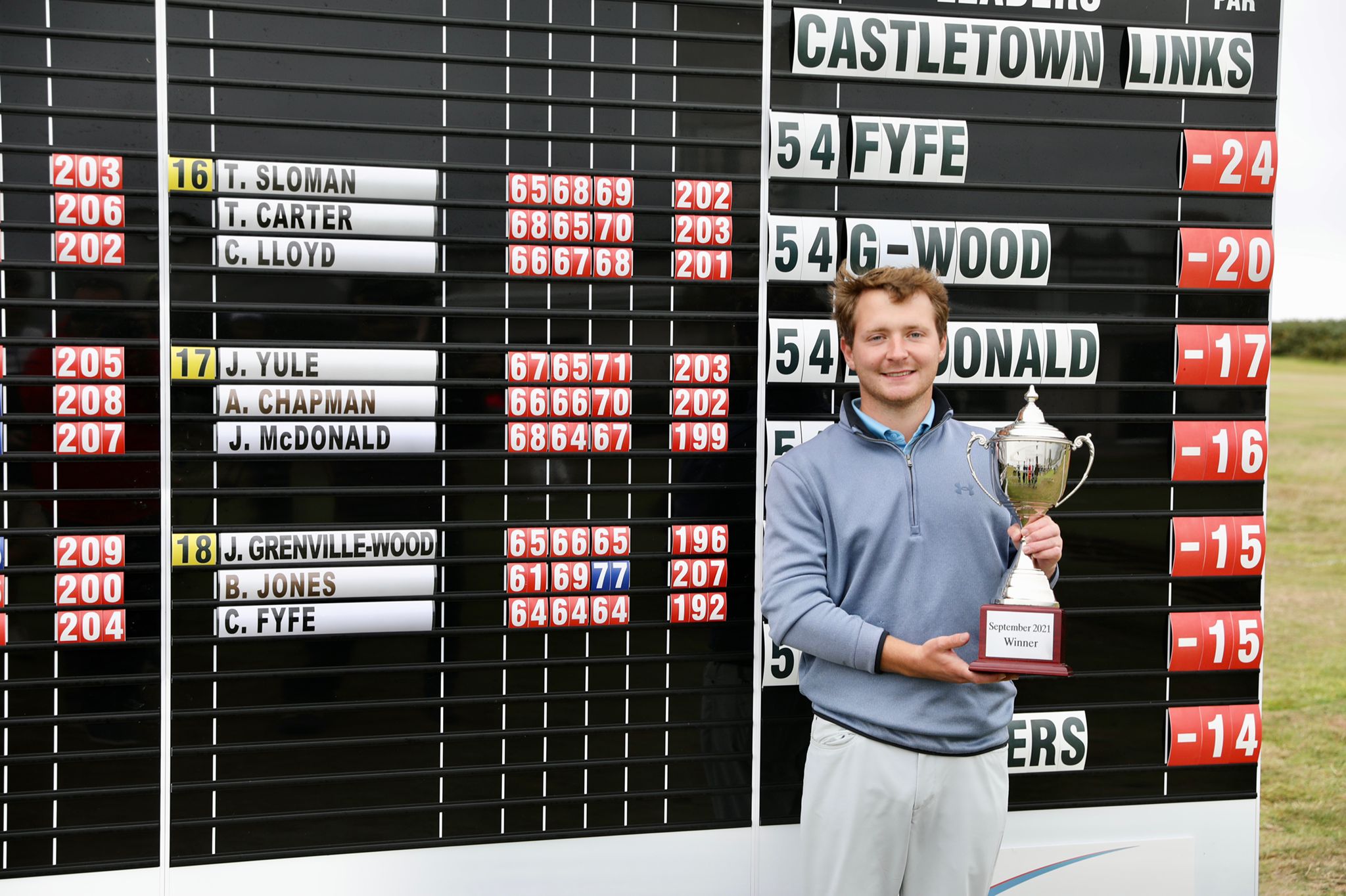 Calum Fyfe has won The Castletown Golf Links Championship on the Isle of Man to claim his first long-awaited victory on the PGA EuroPro Tour by four shots with the lowest overall winning score ever on the Tour.

Fyfe (Trinifold Sports) has been there or thereabouts for some time on the Tour without ever seeing through his week to victory but that duck was finally broken as he signed for a final round of 64 (-8). Leading by two going into the final day, Castletown G0lf Links showed its teeth as the weather started to turn but Fyfe showed complete composure for his third 64 of the week in a display worthy of breaking a tour record.

The Scotsman went around bogey-free as the wind picked up and made early birdies at one and three to pick up from where he left off yesterday before birdies at five, six, and seven put him five under through seven. Nothing seemed to get in Fyfe’s way even when in deep rough on at the 10th where he made birdie to extend his advantage. An eagle at the 12th was the icing on the cake as Fyfe ran away with it for his first win.

Joshua Grenville-Wood started the day knowing he would have to go deep and hope Fyfe would fall back to stand any chance of clinching the title and he did his part of the deal with a second round of 65 of the week. Grenville-Wood made birdie at the first three holes to apply the pressure on his playing partner but Fyfe just kept plugging away. The Els Club golfer let a shot slip at the eighth, and from there destiny was in Fyfe’s hands. Grenville-Wood did secure his best finish of the season for solo second.

Benjamin Jones (The Northamptonshire GC) was in the final group but struggled throughout the final round falling away after a quadruple bogey on the eighth and a bogey on the ninth. Jones eventually got in the clubhouse at five over par for the day settling for tied 27th.

Jack McDonald took solo third at -17 whilst Jack Floydd’s efforts were not enough to secure his place at Slaley Hall for Tour Championships. Floydd missed out by just over £300 so would’ve needed a third place minimum to make it but had to take fourth after a final round of six under.

Highlights from The Castletown Golf Links Championship will air on Sky Sports Golf on Tuesday 5, October at 6 pm with several other showings scheduled. See the full where to watch guide here.

Q School entries for the 2022 season close soon. Make sure you get your entries in today before it’s too late!