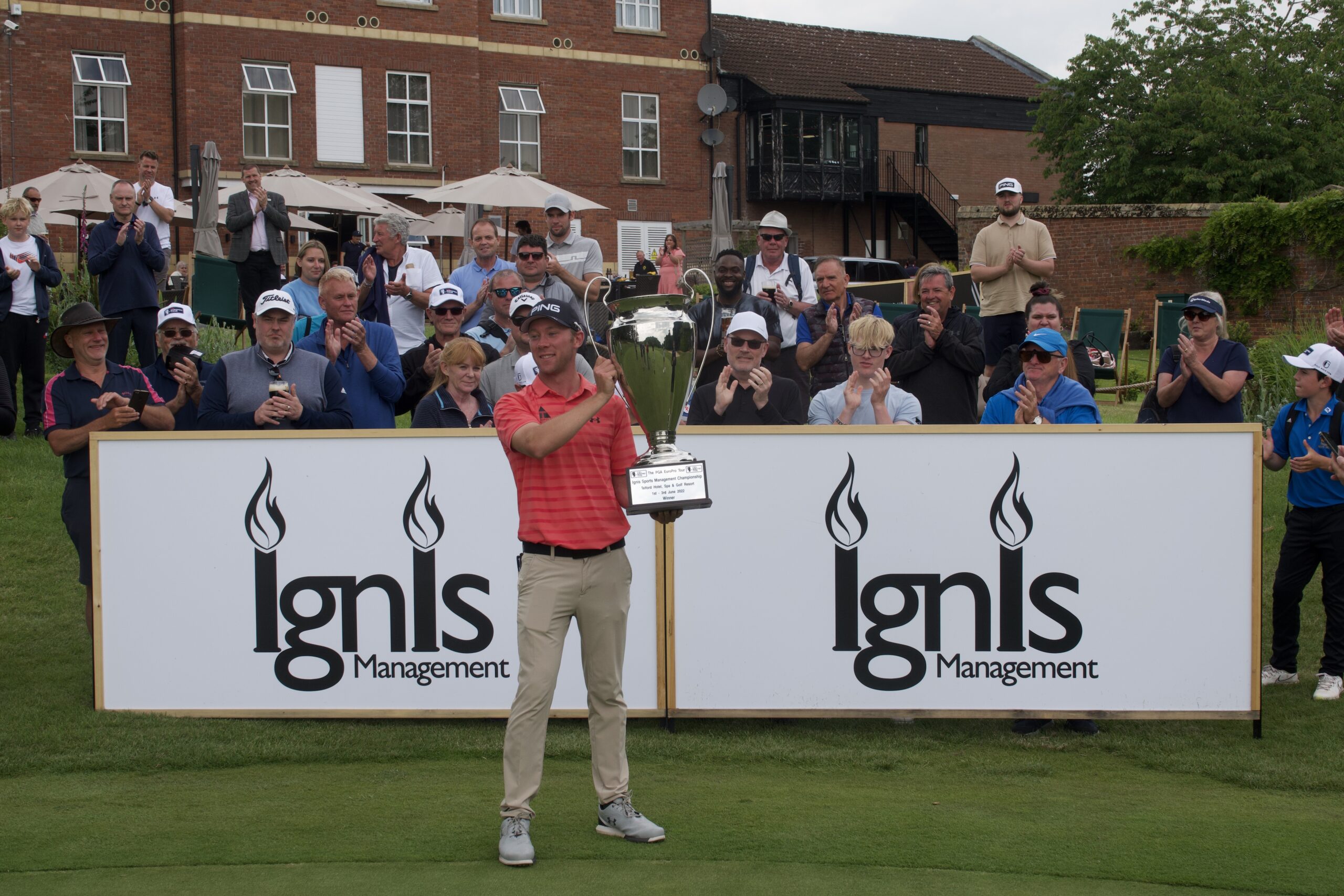 Telford Hotel, Spa & Golf Resort dazzled in the Shropshire sunshine today, as Josh Hilleard secured not only his maiden PGA EuroPro Tour victory – but his first since transitioning into professionalism.

A severe weather forecast encouraged a two-tee start and the leaders were out at 9 am, as opposed to the traditional 11 am start.

That didn’t impact Nick Marsh, however, as he responded to an early bogey in stunning fashion, reeling off four birdies on the front that included three in a row from 6 to 8.

Despite displaying his prowess early into the final round, the field remained tightly packed and at one stage, there were 12 players within two strokes of the lead.

Each group attracted a healthy following, as no-one was aware where the winner would come from.

It would soon become apparent that the eventual champion would derive from the closing group however, as both Hilleard and Marsh exhibited a remarkable spell of golf.

Hilleard, who represents Trinifold Sports Management, made the turn in 32 (-3) and his distance control was phenomenal throughout the entire day.

He parred the difficult 10th hole before securing consecutive birdies on 11 and 12, hitting it to 5-feet in both instances.

Marsh, who held a one-shot lead on the 12th hole, chipped in from off the green to crank the pressure firmly on his playing partner, but he was unfazed and controllably stroked his putt into the middle of the cup. Nick Marsh reading a putt on the 14th green

The turning point took place on the 13th hole – which was the hardest hole throughout the entirety of the week.

Both players had found the fairway, but it was converted to a par-4 for the tournament, and a long approach needed pinpoint accuracy.

Marsh and Hilleard missed the green, with the former finding the bunker which cruelly produced a terrible lie.

The player, who represents Huddersfield Golf Club, could not get his bunker shot close to the hole and he dropped a shot – which would swiftly be followed by another.

At this stage, Hilleard had managed to secure consecutive pars after a superb chip on the 13th was followed by a great two-putt on 14.

Of all the holes around this beautiful golf course, the 15th is perhaps the most enticing due to its risk and reward nature.

The leading duo had managed to find the fairway with water dominating the right side, and they both parred the hole before proceeding to the par-3 16th.

A notoriously tricky hole, each approach found the two bunkers that protect the putting surface heftily.

Neither could get up-and-down, and thus they both dropped a shot before tackling the penultimate hole of the resort, the par-5 17th.

At this stage, David Langley had started to find some rhythm and he carded a three-under back nine to sneak himself into contention.

Hilleard held a one-stroke lead as he stood over his third shot into the par-5, before he skilfully demonstrated his distance control yet again to set-up another birdie putt.

Marsh was in a similar situation, and when he narrowly and agonisingly missed his, Hilleard had calmly rolled his effort in to effectively win the tournament.

Both players parred the 54th and final hole of their week, and Josh Hilleard officially became a winning touring professional.

“I was not convinced of winning until that final putt sunk,” he revealed, when asked about the importance of his birdie on 17.

“It was a nice position that I found myself in today – and it helped that I did not need a birdie to win on the 18th.

“I was catching up and I managed to tie the lead at 13. At that point, I thought: let’s just play golf. I’m no longer chasing but I had to try and stick to that mindset.

“I couldn’t just stop, it’s the worst thing you can do. If you change your game plan mid-round, it can easily affect your performance.”

When quizzed on what this victory could do for his career, he was desperate to enjoy the moment for what it is, before looking too far ahead. “I’m now in a more comfortable position; I still want to do it again – don’t get me wrong – but it’s mainly eased a mental block as, yes, I can do it and now I’m ready to climb to the next rung of the ladder.”

Hilleard and Marsh stole the show today – prior to Langley’s sensational finish – but there were notable others who performed bravely.

Stuart McLaren, who tied the course record after an unbelievable 63 during Thursday’s action, begrudgingly made the turn in 36 (+1).

He produced arguably the greatest up-and-down of the season on 11 however, as his tee shot was pulled into the nasty, tangly rough.

With the green running away from him, his hack out of the trouble managed to remain on the putting surface and he sunk a cool 25-footer for an unfathomable par.

The Scotsman finished in style too, carding back-to-back birdies on his way to a T4 finish.

He shared that position with Jake Ayres and Benjamin Hallam, who both shot four-under to confirm their presence within the top 5.

Next up for the PGA EuroPro Tour is a trip to Donnington Grove for The World Snooker & Jessie May Championship – we shall see you all next week for what looks set to be another fascinating event.