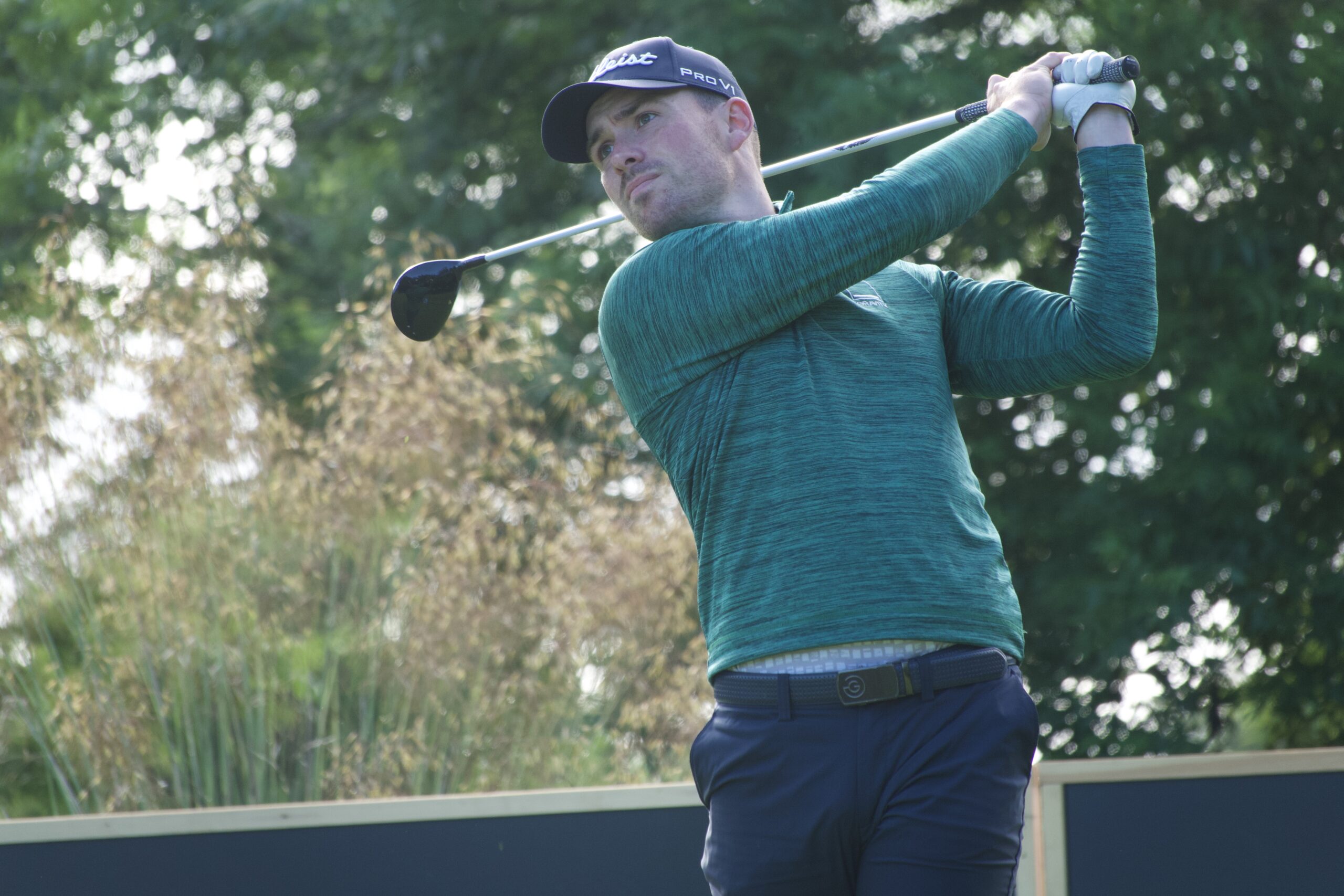 The low and relentless scoring of previous events this season was not emulated at Donnington Grove, although Nick Cunningham (pictured) displayed his class with a terrific 68 (-4).

Cunningham leads the field by one, as only 18 players shot under-par for the opening round of The World Snooker & Jessie May Championship.

The morning groupings were on the right side of the draw today, as unyielding winds dominated the afternoon.

Not a single golfer managed to go bogey-free during the opening round, although Cunningham came exceptionally close by only dropping one shot all day.

He started in steady fashion, parring the first five holes before an eagle on the par-5 6th catapulted him up the leaderboard.

Standing on the 8th tee with an abundance of confidence, it quickly dwindled, as he bogeyed the hole before a par at the last resulted in him making the turn in 35 (-1).

He performed expertly during the latter half however, as birdies on 11, 12 and 18 helped him reach four-under for the tournament and stand alone in the lead.

Cunningham will need to keep his focus throughout the remainder of the week, as Benjamin Jones, Rhys Thompson, Sam Crowther and Thomas Thurloway are nipping at his heels.

He has followed up that scintillating display with yet another one, and he’s in a great position heading into the second round.

Thompson joined the sole blemish club this morning, but he came agonisingly close to avoiding that entirely.

Having started from the 10th tee, he didn’t drop a shot until the 8th hole – his 17th of the day.

The golfer, who represents Slaley Hall, won’t be too disheartened however, as four birdies outweighed his bogey to help position him only one shot off the lead.

Thurloway, who triumphed at Q-School last October, is starting to string some decent rounds together that looks certain to make him a true contender this year.

The Englishman responded brilliantly to missing the cut at Harleyford, finishing in 13th place at Telford and establishing a platform for further success.

He started on the back nine and made the turn in 35 (-1) after one birdie – at the par-4 14th – and eight pars delivered the consistency he was seeking.

The Q-School champion experienced a more entertaining back nine however, carding bogey on the 5th before rallying late into his round with three birdies during the closing four holes.

Crowther was part of the afternoon group, and he proudly leads them as the lowest score during that timeframe.

Whilst many around him suffered the swirling and overwhelming winds, Crowther took it in his stride to post an incredible score – considering the troubling conditions.

He came close to carding a bogey-free round, but a bogey on 7 soured what would have been a stupendous effort.

He did have time to birdie the 9th (his 18th), which will undoubtedly make his dinner taste a little sweeter this evening.

Whilst there are only three players within one shot of the lead, a larger cluster currently occupies T5, with a collection of seven players only two shots off the pace. Joe Dean has started the season promisingly, finishing T15 and T7 at the opening events of the new campaign.

Dean was in the penultimate group during the final round at Harleyford, but a two-over finale saw him plummet down the leaderboard.

Away from that minor mishap and Dean has been in consistent form throughout, with yet another excellent display today.

Dawson only dropped the one shot himself –  at the par-4 3rd – before fighting back with three birdies on 5, 9 and 13.

He’s only featured in one event this season – the Ignis Management Championship – and he missed the cut, so today’s performance should inject him with confidence.

Walker is another name that has continuously been near the summit of the leaderboard this season, and another silky round should garner the attention of those hoping to progress to the Challenge Tour.

The Englishman has recorded back-to-back top 10 finishes so far this year, and another here would be a huge statement to the field that surrounds him.

Doherty and Stewart are the only two Scotsmen to be positioned in the top 10, with the former notching one eagle and two birdies – but he did card three bogeys throughout.

Stewart, on the other hand, made the turn in 33 (-3) and looked set to worry Cunningham, who sat atop the summit independently.

A frustrating back nine, however, resulted in just the one bogey which was otherwise surrounded by eight pars.

Rhys Clarke flies the Irish flag alongside Dawson, and he’ll be eager to chop into Cunningham’s lead after a two-under 70.

Clarke endured a fascinating afternoon, securing six birdies but four bogeys ensured he would not be in a more advantageous position.

The Irishman only recorded six pars in what is surely a contender for the most colourful scorecard of the day.

The cut line currently sits at +2, but with milder conditions forecasted for tomorrow, that could easily lower as these impressive professionals will hope to bite back.

Donnington Grove proved to be an almighty test today, but we have no doubt the field will look to score positively and propel their standings to not only make the cut – but prepare for a charge on the leaders.