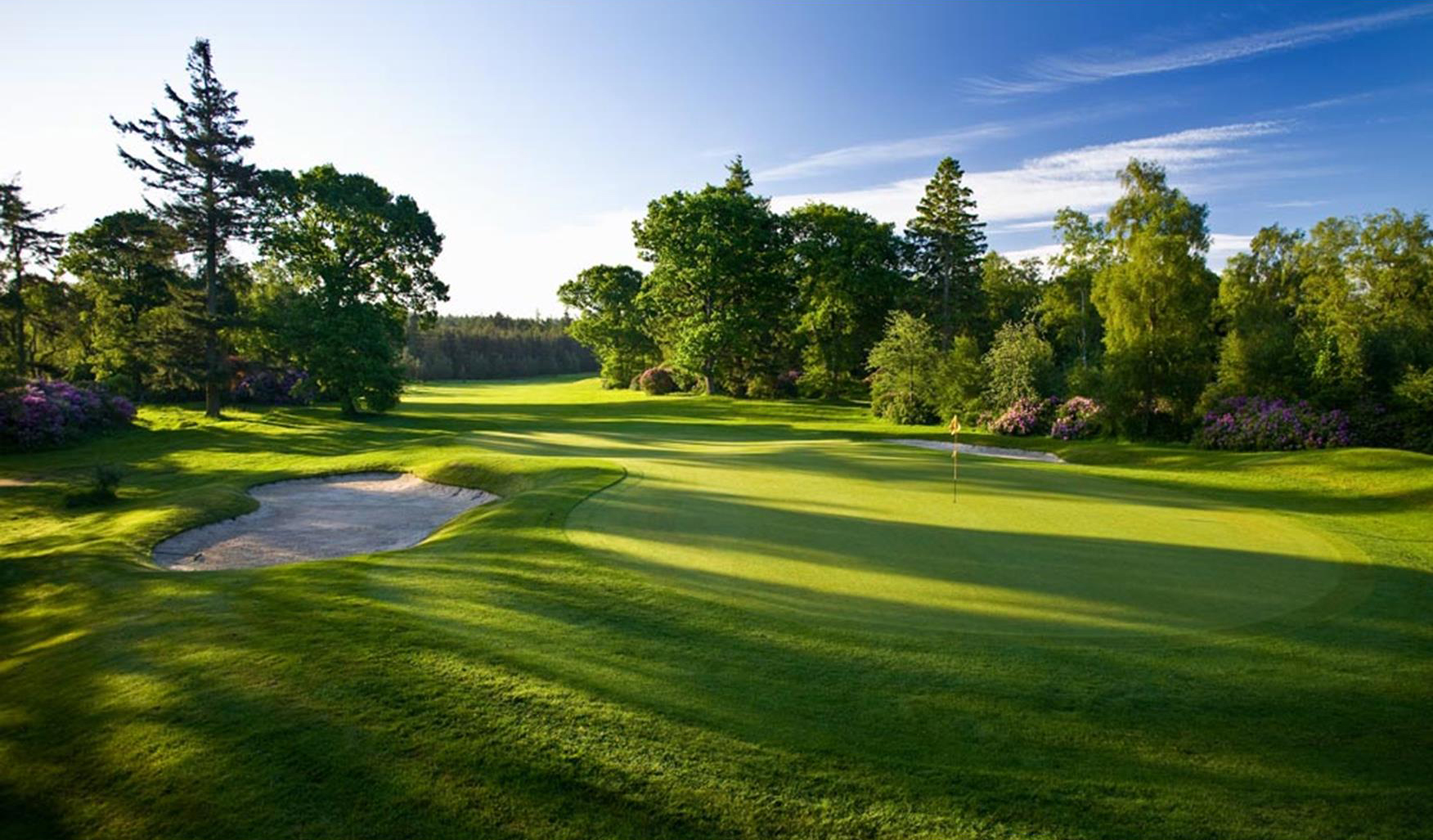 The QHotels Collection Championship will take place between July 27-29, where the majestic Hunting Course will reveal its magnificence yet again.

Slaley Hall is commonly referred to as the ‘Augusta of the North’, and the Hunting Course’s outstanding layout is worthy of such comparisons.

Seamus O’Carroll acquired the 340-acre property in 1984, before he tasked renowned architect Dave Thomas to design a golf course with professional competition in mind.

The Hunting Course is long, measuring over 7,000 yards, and the layout’s variation is what makes it such a memorable challenge.

The collection of pines act as a stern line of defence, with the occasional water feature strengthening the course’s difficulty.

Bunkering is a prominent feature without being overly used, whilst Thomas’ intelligent use of natural features – such as streams dotted throughout – is a testament to his skill as a designer.

Slaley Hall’s Hunting Course has several standout holes; with danger lurking throughout, it is a mightily difficult track to produce low scores.

The opening hole plays uphill from the tee and a confident tee shot will need to avoid the bunker that guards the left-hand side of the fairway.

From there players will need to pure an approach to a green that is raised, typically adding a few yards to the overall distance.

Another attractive hole is found at the 9th, as members of the tour will need to avoid the small stream that splits the fairway into two sections.

The green is heavily protected by bunkering at both sides, so this will be another moment that will require the utmost accuracy.

Players will be welcomed into the back nine with two short par-4s that can yield scoring opportunities if in play off the tee.

However, it is around the 15th hole where the Hunting Course tightens its grip. Featuring an overwhelmingly difficult finish, the eventual winner could be determined by who negotiates the final four holes of each round the strongest.

The penultimate hole doglegs to the right, and it is played to a green that slants towards the front – requiring a pristine drive and approach.

When it comes to closing holes, rarely is Slaley Hall’s Hunting Course defeated as the 18th is a work of absolute beauty.

Measuring 455 yards but playing uphill, the fairway is separated by a small water hazard that is desperate to collect any balls that stray too far.

The subsequent approach offers no reprieve, as the unpredictable nature of the surrounding rough makes bogey or worse completely plausible on the 18th and final hole.

Considering its relatively young age, the Hunting Course is one of England’s greatest modern layouts.

It had hosted the European Tour from 1996-2002, which should highlight not only the quality of the golf course, but the surrounding facilities too. Jonny Mould, Head of Golf at Slaley Hall Hotel, Spa & Golf Resort, noted: “At Slaley Hall, we are very excited for the return of the EuroPro Tour. After last year’s Tour Championship, we have been busy preparing to welcome these talented players again.

“We are looking to keep the same layout but the course will play very different due to the event being played in the summer. Fairways and greens will run well – so finding essential birdies is key as the course will be much firmer.”

Dan Godding, CEO of the PGA EuroPro Tour, was delighted at the quality of the course for last year’s Tour Championship.

“Slaley Hall’s Hunting Course is a work of art; its golf course and surrounding environment could have been hand-sculpted for dramatic moments.

“The opening nine yields scoring opportunities and it is fundamentally important they are taken, as the closing stretch will demand a shot or two back from the majority of the field.”

The Hunting Course played host to the final event of the previous campaign and the Northumberland venue did not disappoint.

Prior to the opening day, only Mitch Waite had secured his place in next season’s Challenge Tour, meaning there were four cards up for grabs.

After successive impressive performances, William Harrold led the field heading into the final round of the season, but his even-par outing left him at -6 and 5th.

Jamie Rutherford was in the penultimate group and a dropped shot on the 54th hole of his tournament opened the door a smidge for Jack McDonald, who was in the final grouping of the day.

McDonald started Friday only one-stroke back from Harrold and he was left with a tough par save on the last, which he narrowly failed to convert.

The result meant Rutherford would win on the PGA EuroPro Tour for the second time during the season, and he also topped the Order of Merit that Waite looked destined to occupy.

Calum Fyfe and Dan Brown (-7) joined McDonald in a three-way tie for second, as the former two progressed to the Challenge Tour at the expense of Will Enefer – with McDonald sitting agonisingly close in 10th.

Sponsoring the ninth event of the season is The QHotels Collection, a large hotel chain that have Slaley Hall Resort, Spa & Golf under their ownership.

We will be visiting three QHotels venues this season and the company have built a strong reputation through their immaculate service.

There are 21 four-star hotels and resorts that are scattered across the UK, with several boasting outstanding golfing facilities.

Whether you’re looking to escape normality or indulge in serenity, QHotels can offer varying experiences of relaxation.

If you’d like to know more about The QHotels Collection, you can find that information here.

Slaley Hall’s Hunting Course provides the perfect blend of entertainment, danger and opportunity to produce a week like no other.

The tournament should play drastically different to last season’s Tour Championship, considering it was played in October and we’ll be visiting during the height of summer in late July.

Only one thing is certain: the eventual winner will have to be at their absolute best if they are to conquer a course as challenging as this.