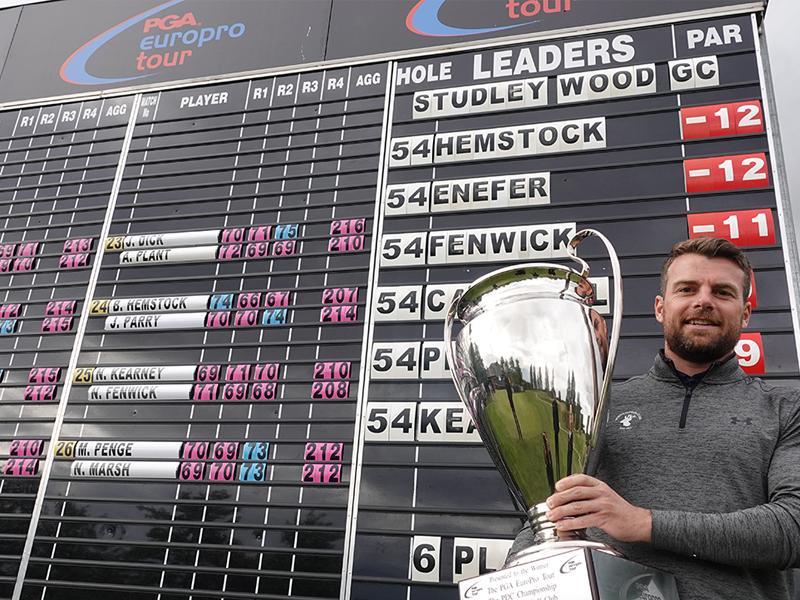 Billy Hemstock has won The PDC Championship at Studley Wood Golf Club in a playoff against Will Enefer.

Hemstock (Roehampton Club) started the day one shot behind Marco Penge and Nick Marsh and posted a final day score of 67 (-6) bogey-free to take it to a playoff against Enefer with a week of 74, 66 and 67.

Enefer (Retail Furniture Ltd) was way off the pace at the start of play but he signed for a course record 63 (-10) to take him to the top of the leaderboard for the majority of the afternoon. It was an explosive round with seven birdies and two eagles with his back nine particularly stand out.

Neil Fenwick (Dunbar Golf Club) kept himself in the hunt needing a birdie to make it a threeway playoff but he finished up one short with rounds of 71, 69 and 68 for third.

Going back to the eighteenth, Hemstock drained his putt for birdie whilst Enefer could only bogey it handing Hemstock his first win on the Tour since Mannings Heath last year.

On victory Hemstock said: “I felt like I played really well the first day. It was really windy. The second round I stayed patient and they started to drop and I had a good finish with four birdies on the back nine on the trot. I stayed in that sort of mindset and waited for things to happen. It was nice to birdie the last two to take it to a playoff.”

“I’d love to be in contention again at Newmachar. I’ve got a week or so to get my game ready or keep it in good fettle, but I’m looking forward to playing and especially at Tour Championships.”

The overnight clubhouse leader pairing of Marco Penge and Nick Marsh were level par apiece to tie for seventh in Oxfordshire.

Victory for Hemstock moves him into the top ten in the Race To Desert Springs with Enefer. Marco Penge narrowed the gap on Richard Mansell at the top whilst Nick Marsh closes the gap on making the top 60 with one event to go.

Highlights of The PDC Championship will be shown on Sky Sports Golf, 17 September at 20:00.

The Newmachar Challenge finishes the season at Newmachar Golf Club in Aberdeen the week after next.