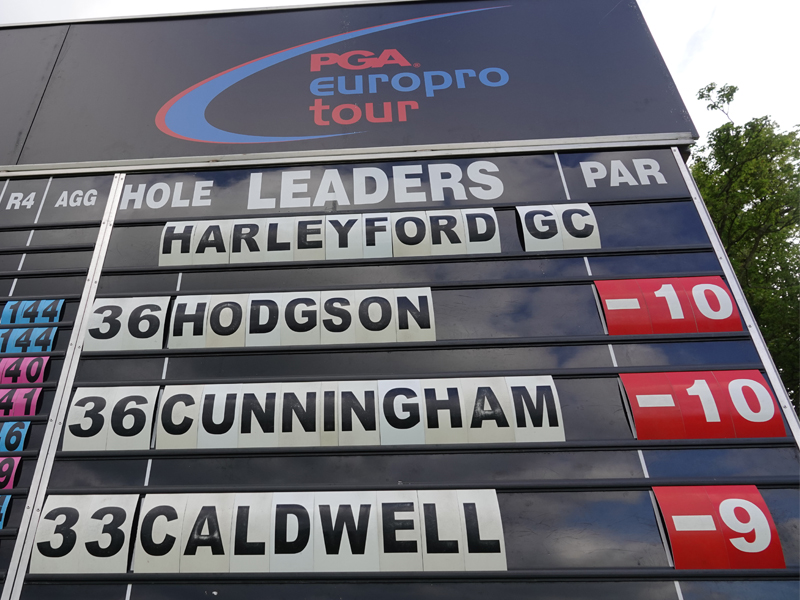 Stiggy Hodgson and Nick Cunningham will go into tomorrow’s final round as the clubhouse leaders after going five and six under respectively for the second day to give them both a one-shot lead over their nearest rivals in The Matchroom Sport Championship.

Hodgson of Modenco had what he described as a ‘difficult’ round despite only one bogey, four birdies and an eagle on his second round at Harleyford Golf Club.

Meanwhile, Cunningham (Bedford and County Golf Club) said: “I played really solid. Putting really well. Holed a lot of between 8 and 15 feet. The Par 5s have not been great so I think I’ll try and improve on them tomorrow.”

Pavan Sagoo of Ealing went three deep in his second round to be tied third going into his final round on nine under with Jonathan Caldwell, Clandeboye Golf Club, and Ryan Campbell, Falkirk Golf Club, scoring well to also sit on nine under.

It was a good round from Niall Kearney from The Royal Dublin Golf Club after going seven under through his front nine, it could’ve got better for him sitting nine under after 17 but he found himself with a double bogey to finish.

Dave Coupland, Woodhall Spa Golf Club, is tied sixth as it stands after shooting a round of 66. Marco Penge from Golf at Goodwood was also consistent with two rounds of 68 to tie for sixth.

Manuel Morugan, Chaparral Golf Club, recovered from one over yesterday to four under to move above the cut line on day two. It was a similar story for Mikael Lundberg and Ben Hall.

Jack South, Hagley Golf Club/Taymar Homes, was five under for the day but missed the cut after shooting an opening round of 76.

The final of  The Matchroom Sport Championship at Harleyford Golf Club gets underway with the first tee times at 8 am. A strong field on a course where birdies were there to be played for, meant the cut was made at three under after the second round.