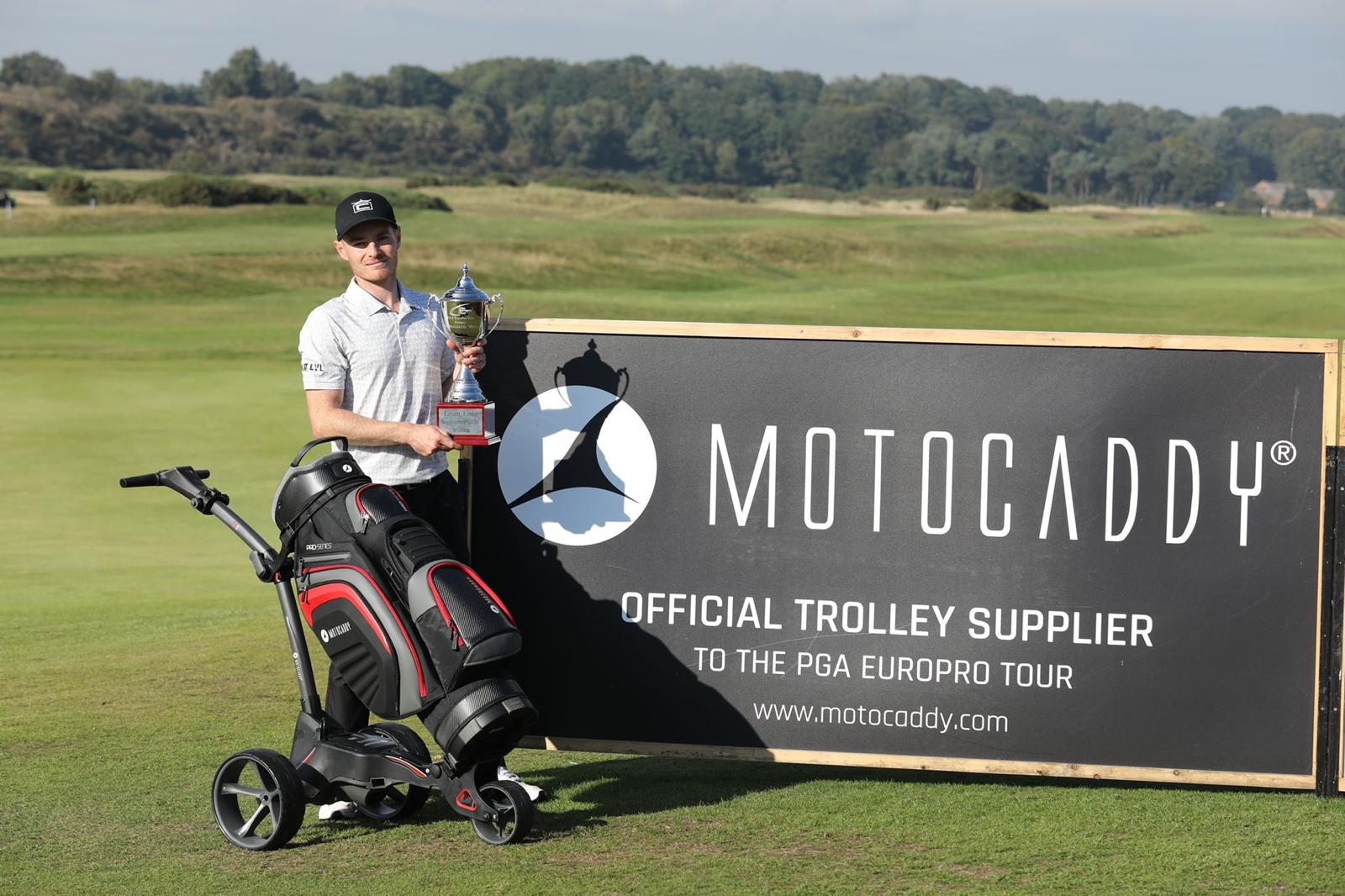 Jack South shot a life-changing final round of 59 to claim The Motocaddy Masters title at Leven Links as well as a £59,000 bonus from the EuroPro Tour and £60,000 from sponsors Cobra Puma Golf.

South started the day three shots back from overnight leader William Harrold and produced the most spectacular round in PGA EuroPro Tour history to do the unthinkable. He began with birdies at the first and second before going out in 27 to set all eyes on the Birmingham golfer as he hit the back nine having gone on a streak of five birdies from five to nine.

The Tippity Green golfer continued to apply the pressure and made birdies at 11 and 12 to be nine under through 12 and two clear of Jack Davidson. Davidson had his own 59 watch earlier on and ended up signing for a spectacular round of 60 (-10) to take finish tied 3rd overall at -13.

South’s work wasn’t finished knowing he needed to make two further birdies for a 59 and made one at the par 4, 14th meaning he only needed one more from his remaining four holes and that he did at the 16th. With the experienced Paul Maddy on the bag, South steered the ball home on the 17th and 18th plotting his ball 20ft from the hole knowing a two-putt would seal the 59 and bonus and that was what he did.

He said: “Just out of this world.  It’s a phenomenal feeling It’s been such a hard year, I’ve worked so hard without any reward. It was a 50 footer for birdie on the hill, it was so slow up the hill and I left it 6.5 feet short and I said to Paul can you read this for me because it’s so hard. I just said the same thing all day when I felt the pressure, just put a good stroke on it and keep your head down. All I know is it went in, that’s the best putt of my career, that’s the best shot of my career.”

“I went for it today, the course is fantastic, the spectators, the members, the pros and captains, they’ve been so welcoming. We’ve had the perfect sunny day.”

“I didn’t think it was possible to win that on the EuroPro let alone in a day, the sponsor’s Cobra Puma putting up a bonus for us and the EuroPro, I can’t put it into words, it’s almost like a win on the main tour isn’t it? Onwards and upwards.”

South is part of the Cobra Puma NXT LVL Squad and with that claimed their bonus for shooting a 60 or better for £60,000. The win sees South move to 11th on the order of merit up 55 places.

As well as the £12,500 first place, South will also get an M5 GPS with Lithium battery and a PRO 3000 Laser; the runner-up Hilleard receives an M1 with Lithium battery, whilst Davidson will also take home a popular PRO 3000 Laser Rangefinder, which in total is over £2,000 worth of prizes. Motocaddy is also offered a PRO 3000 Laser as part of a special skills-based challenge for the players throughout the event with the winner carding the most birdies/eagles through the three rounds. South also claimed that prize with 22 birdies.

Davidson’s round cannot go without further detail, the Welshman was six shots off the lead at the start of the day but came from nowhere to be on the brink of a 59 too as mentioned. The Caversham golfer went out in 28 to be put on watch before birdies at 10, 11, 12, and 16 meant he needed a birdie on 17 or 18 to take the bonus. On any given day, a 60 would’ve been a winning final round but for Davidson, South was unplayable in his feat.

Josh Hilleard (Golfing4Life) took solo second after a final round of 62 coming in for 29 whilst Davidson had to take a share of third with runaway order of merit leader Mitch Waite at -16. Waite with a last day 65 (-5).

Highlights from The Motocaddy Masters at Leven Links will air on Sky Sports Golf on Tuesday 21, September at 6 pm with several other showings scheduled. See the full where to watch guide here.