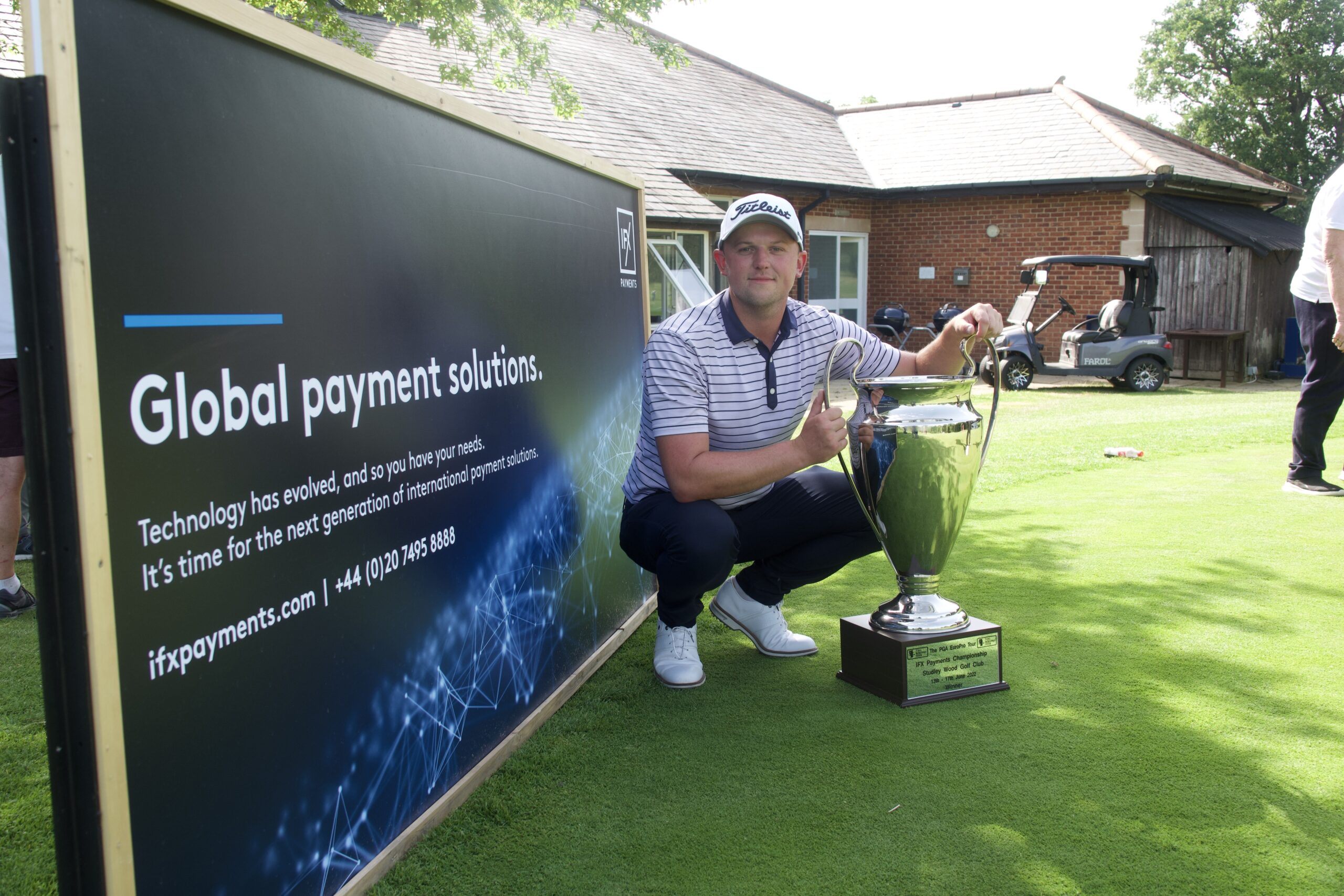 Jake Ayres has triumphed in a PGA EuroPro Tour competition for the first time in his career; the 29-year-old has now propelled to 2nd in the Order of Merit with £14,250.

When the final group departed the clubhouse and strolled to the first tee at 11:10 this morning, it was abundantly unclear where the winner would materialise from.

Studley Wood Golf Club – coupled with conditions – produced a week of low scoring for members of the tour, with three players recording 64 (-9) yesterday.

There were more than 15 golfers within four strokes of the lead overnight, but with scoring so prominent throughout, you may have believed those furthest back stood no chance.

Whilst the wind was tame during the opening two rounds, it decided to misbehave as Friday’s finale developed.

Those scores of 66, 65 and 67 – which were common throughout Wednesday and Thursday – started to grow in size.

What’s interesting is that those who held the overnight advantage failed to deliver the same free-flowing scoring than the groups before them.

We must consider the pressure that comes with contention; each shot is given those few extra seconds of contemplation and focus levels are at its peak.

It’s a nerve-wracking arena and if you haven’t been there before, it’s difficult to control the pulsating emotions that are typically kept in check.

For Josh McMahon, it was his first time in the final group this season but rounds of 66 and 67 justified his presence in the glorified grouping.

He failed to ignite the final day engine during his opening eight holes, but his fortune would take a dramatic turn when faced with the second par-5 of the course. An excellent putt resulted in an eagle. He was desperately looking for something to inspire him, and his prayers were answered.

Joe Brooks, another member of the last group, got off to an unsteady start and found himself two-over early into the round.

He demonstrated his grit and desire to be competitive however, as he clawed his way back to even par on the 9th hole.

James Allan was the final member to close out the tournament, but he didn’t quite have his best stuff today.

Whilst the swirling wind caused the Essex-based golfer problems, we cannot underestimate how good of a start he has had to the new campaign.

The 27-year-old occupies top spot in the Order of Merit, and another strong finish here (T13) has further amplified his reign at the summit.

Nick Marsh was in the penultimate grouping, and he applied early pressure through a birdie at the 1st – but another wasn’t added until the par-5 9th.

He made the turn at two-under and looked destined to pick up his first EuroPro Tour title of the season.

He, alongside Allan, has been in unbelievably consistent form this season; both men look like serious contenders to make the jump this year.

We are all aware of the fact that a golf tournament doesn’t truly begin until the final group make the turn, which was certainly the case today.

McMahon hit an untimely second shot, failing to make full contact with the ball and the end result was two large hops over the water hazard that looked certain to claim another victim.

Every golfer needs luck on the final day of the tournament. For McMahon, who moments ago narrowly avoided a hazard, chipped in for eagle.

That made it back-to-back eagles for the Wirral-based golfer, and he took the outright lead for the first time this week.

Golf quickly reminded us who was boss at the following hole, as his tee shot found the water hazard and he failed to get up-and-down for bogey – he plummeted out of the lead almost immediately.

Brooks, on the other hand, fought valiantly to keep himself afloat. He grinded throughout the day and his reward would soon come, sparking a spell of excitement for those following the final group.

Before this, Marsh had bogeyed the 12th and that was swiftly followed with another at 14.

Despite his tremendous efforts, he would par the remainder of the 18 and finish T6 – his third top 10 of the season to date.

With all the attention on the final two groups, Ayres had quietly gone about his business when he stood on the 16th tee, four-under for the day.

The beautiful thing about Studley Wood is that it concludes with two par fives, meaning a surge can come from virtually anyone in the field.

Whilst they would have been unaware at the time, the leaders were reliant on no-one finishing in explosive fashion.

A birdie on the 16th was met with another at 17. At this stage, he was tying the lead, but he knew one more was needed to sit more comfortably in the clubhouse.

His 54th and final hole of the tournament resulted in another birdie – the true target had now been set.

After Allan and McMahon parred the 16th, the latter needed an eagle-birdie finish to tie the clubhouse lead, or eagle-eagle to win it.

Brooks, whose approach to 16 failed to find the green, chipped in from the rough and the buzz transcended through everyone following his group. Joe Brooks after chipping in at 16

The task was simple: birdie-birdie to force a playoff, or eagle-birdie to win the event outright.

A solid drive found the centre of 17, but a mis-struck approach snuck off the putting surface and a chip was needed.

We’re sure Brooks would be the first to admit that his effort wasn’t outstanding, but when you can putt like he does, it really doesn’t matter – a birdie was acquired on the 17th.

If there was a time for the perfect tee shot, this was it. Unfortunately, his ball found a nasty lie in the bunker, and he was forced to splash out.

He missed the green with his third and his chip failed to sink for birdie; he would two-putt for a bogey and finish T3.

Consequently, Jake Ayres was crowned champion on the PGA EuroPro Tour for the first time in his career.

When quizzed on just how good his round of 66 was, he was reluctant to acknowledge the impressiveness of the feat.

“It’s tough because you don’t want to blow your own trumpet, but it is a very good score,” he relayed, relieved to get that elusive victory on this ultra-competitive tour.

“If you hit good drives, you should get to most par fives in two. I didn’t look at a leaderboard away from the one near the putting green.

“I can be quite critical on myself, and I never give myself the justice of a good week, but I definitely can this week.”

Despite earning a career-first EuroPro victory, he is well aware of how long the journey is; there’s seemingly only one goal on his mind: the Challenge Tour.

“It was a great round today, but the season is not done – there’s still 12 events to go! If I rest on my laurels now, I won’t get top 5 and that’s all I care about.”

Another tournament concludes and the race to Lough Erne intensifies as a result.

Congratulations to Ayres on his inaugural tour title and we will see you all at Cumberwell Park for The Bendac Championship.