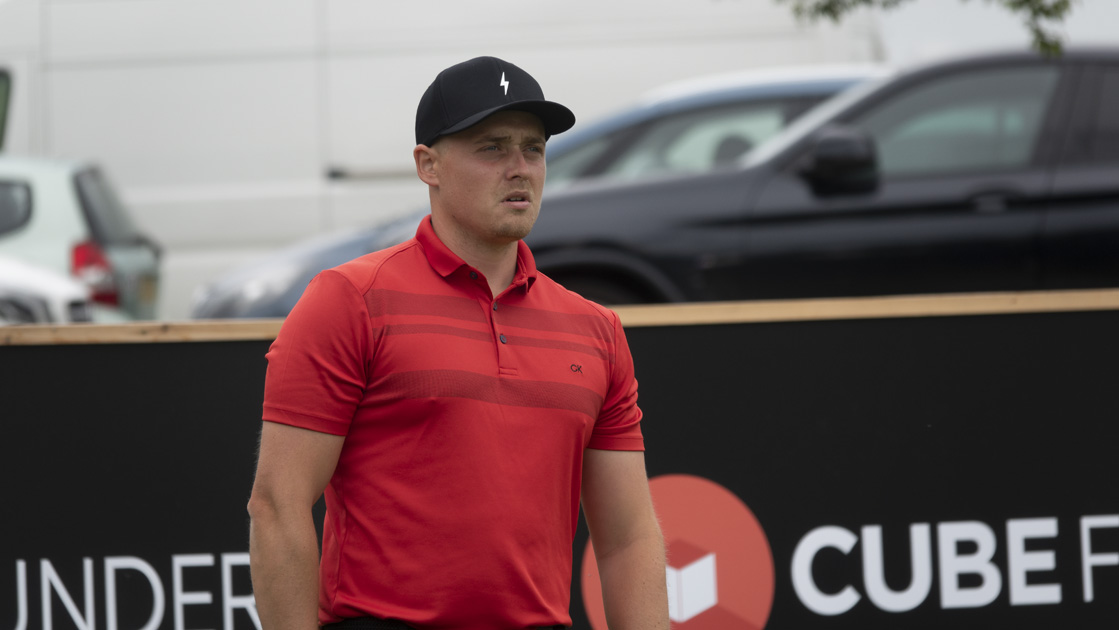 Curtis Knipes produced the second lowest round of the day to sneak into the co-lead and confirm his presence within the premium group tomorrow.

Four birdies on the front nine saw him surge up the leaderboard before another one at the 623-yard par-5 14th enabled him to finish at -6 for the tournament so far.

Whilst James Allan will be happy he’s part of the leading duo, he’ll have a sour taste in his mouth due to his finish.

At one stage, Allan stood at -9 for the tournament and held a three-stroke lead, but three dropped shots during his closing three holes has offered renewed opportunity for the remainder of the field.

Chris Maclean is only one back from the pair and he’ll also be featuring in the marquee group tomorrow alongside the two Essex-based golfers.

The Scotsman made the turn in 34 (-3) after four birdies and a sole bogey, but another bogey at 14 pushed him down to -2 for the round.

Nick Marsh and Will Enefer are in a tie for 4th – but it could have been much better for the latter.

At one stage, Enefer was at -6 for the tournament, however, two dropped shots on the back nine dampened his overall standing.

Marsh, on the other hand, produced a classy display to card 69 (-3) and bolster his chances of a first seasonal victory.

Jack Davidson, who has already been crowned champion this campaign, sits at T6 alongside countryman James Frazer.

The Welshmen would have been hoping for a more positive display during the second round, as they posted level and +2 for the day.

Brandon Robinson-Thompson shot the lowest score of the round, which has seriously elevated his chances of progressing to the Challenge Tour.

The 30-year-old started his tournament with a score of +4, but his second outing’s score of 66 moves him to -2.

Ryan Brooks, who was 5th in the Order of Merit before the week, is also sat in T10 alongside Robinson-Thompson.

The Tamworth-based golfer would have hoped to build upon his first round score of 68 (-4), but he had to settle for 74 (+2) during his second loop.

It’s quite fitting that the seasonal leader would be co-leading the Tour Championship, isn’t it?

James Allan has enjoyed a stellar campaign, and victory tomorrow would see him become the highest annual earner in PGA EuroPro Tour history!

Michael Stewart failed to build on his opening round 69 (-3), instead going backwards with a knock of 75 (+3).

Dermot McElroy also finds himself over par for the tournament, but the leading trio earned such a healthy advantage throughout the year that promotion is virtually a given.

Josh Hilleard has made it back-to-back rounds over par, but he still has a fantastic chance of taking the leap to the Challenge Tour.

Ryan Brooks, who was only one shot off the lead after the first round, regressed during the second outing and currently sits at T8 – tomorrow will be the biggest day of his professional career.

Brandon Robinson-Thompson responded beautifully to post the lowest score of the second round.

If he can mirror today’s performance, he should be one of the five who will gain Challenge Tour status.

Stuart Grehan is in the red for the tournament, and a score of -1 is enough to break into the top 10 and ties.

Paul Maddy is +1 for the week and he should be higher placed considering he took 9 at the par-5 9th.

Jack Davidson is at -3 after he dropped a shot at the par-3 18th – the final hurdle of his day.

Due to a severe forecast during the early afternoon, the final round in PGA EuroPro Tour history will be a shotgun start.

Play will commence from 09:15 and we should know the five who are graduating by 4 pm tomorrow afternoon.