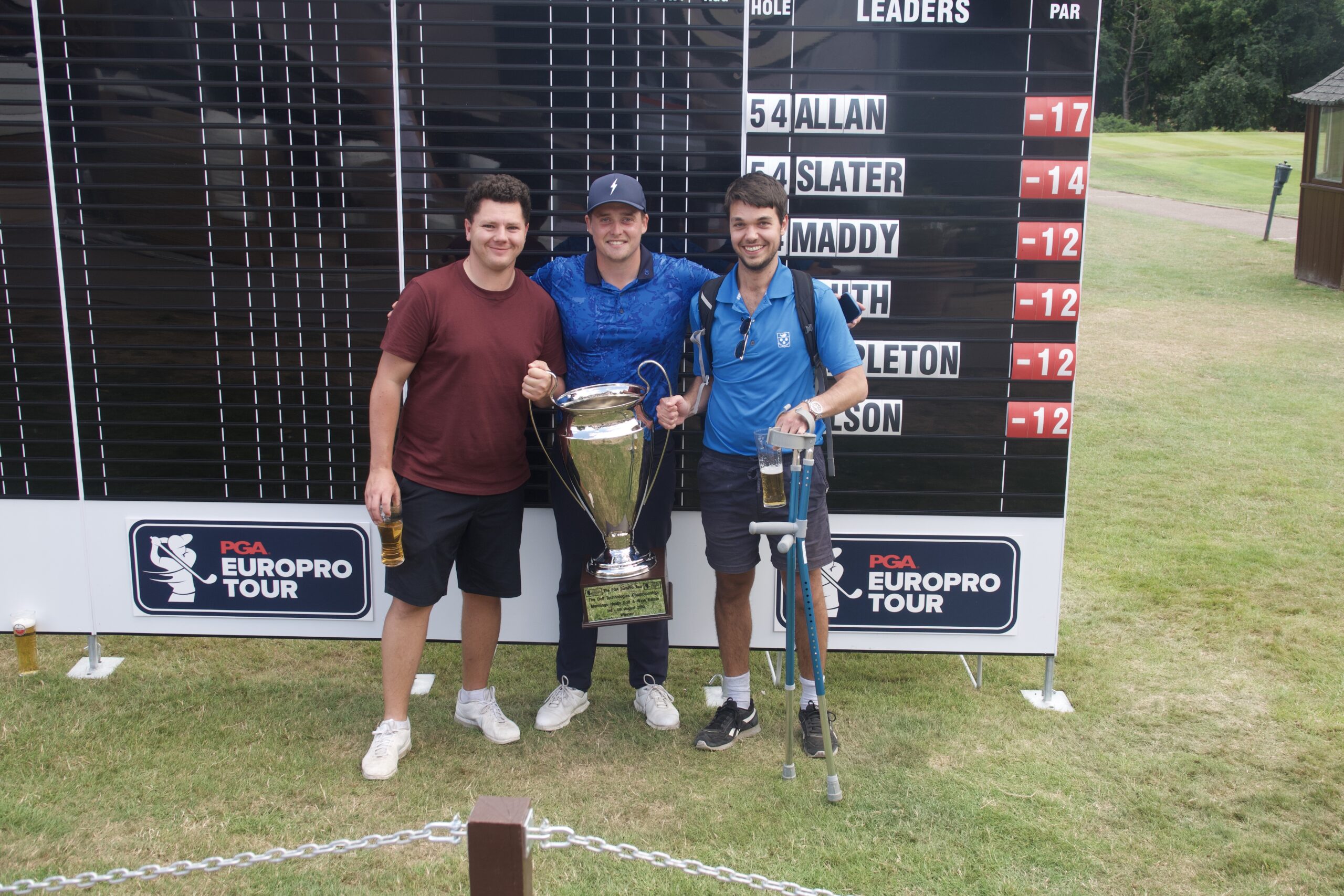 James Allan finessed his way to victory for the second time this year; the Englishman has catapulted back to the throne of the Order of Merit.

When James Allan captured his maiden PGA EuroPro Tour title at Harleyford Golf Club, a sense of awe – and relief – casted over his character.

Allan has been a member of the EuroPro Tour for several years, and he came agonisingly close to conquering this supremely talented field prior to his triumph in the Cubefunder Shootout.

“I felt really nervous today, a lot more than I did for the final round at Harleyford,” he tells us after his sublime victory at Mannings Heath Golf & Wine Estate this afternoon.

The overriding question would be why? Why would he feel such nerves after already being crowned champion?

Well, the answer to that question is straightforward: there was a lot more riding on this tournament.

Any champion of the 2022 season is fundamentally aware that another victory would most likely result in qualification to the Challenge Tour.

Allan, having already championed the opening event of the campaign, knew that he was a mere 18 holes away from returning to the stage that he belongs to.

Not only did he force his way into the final group, but he virtually set up his victory on the eve of his finest hour.

The Englishman has been exceptionally consistent this year – highlighted by four top 10 finishes this season – and he has always showcased his willingness to go extremely low.

Despite his tremendous achievement, he didn’t have it his all way, and there was one figure who fought valiantly throughout – Jack Slater.

The final trio consisted of Allan, Slater and Pavan Sagoo, who is also a champion of the current season.

All three birdied the first and it looked possible that they could all go unfathomably low, but a double bogey for Slater on the 2nd firmly slammed the breaks on his inaugural title dream.

Sagoo also failed to find any consistent rhythm, and an array of mistakes effectively removed him from contention early on.

“I played some really nice golf yesterday and I also played really good today, but I just needed to hang in at times – Jack really pushed me all the way,” Allan disclosed.

Perhaps truer words have never been spoken, as Slater responded to his early setback fantastically, birdieing 5 and 6 to make the turn at 35 (-1).

The glaring issue for Slater was that Allan has the short game of an absolute wizard, which he happily demonstrated on four occasions during the first nine holes – getting up-and-down each and every time.

Each moment Allan missed the green, he simply delivered with an unbelievable chip or putt, slamming the door firmly in the face of his nearest competitor time and time again. Jack Slater was incredible throughout all three days

For a lot of the field, that overwhelming pressure would typically result in a complete breakdown, but Slater kept asking questions – questions that Allan would happily answer.

The highlight of the opening nine was Allan’s powerful eagle on the par-5 8th, although he would drop his first shot at the day of the following hole to make the turn with a three-stroke advantage.

The leader parred the first three holes of the back nine, whilst Slater found a birdie at 11 to close his once four-stroke lead to just two.

Allan effectively closed the tournament out following three successive birdies from 13 – 15, where he expertly got up-and-down on the 13th from an outrageously tricky position.

A long tee shot on 15 resulted in another shorter shot into the green, and the control that the champion has over his golf ball is simply unfathomable.

Slater pushed and pushed, but Allan’s power, elegance and skills with the short stick ultimately became too troublesome to overcome.

Nevertheless, the runner-up confessed that this week was a gigantic confidence boost, and that’s something he will lean on when he is inevitably in this position again.

Allan finished with a bogey, but that certainly didn’t dampen the party – the Essex-based golfer was crowned champion for the second time in a matter of months.

Challenge Tour and Beyond

From the opening event, Allan became a frontrunner for qualification to the Challenge Tour, so it’s fitting that the first champion would become the first player to book his place into next season’s Challenge Tour.

This wasn’t a process that magically, happened; no, Allan’s journey is the result of dedication, sacrifice and difficult decisions.

“I changed where I based myself and also how a practice – it’s a lot more performance-based now,” he revealed, beaming from ear to ear.

“I practice at Reigate Hill and it’s about an hour and 15 minutes away from my house, so I have to commit to each training session.” James Allan produced a short game masterclass for the final round

The two-time champion’s coach is also based at the club, which influenced the decision and thus, greatly assisted with his phenomenal season.

“My time management has improved a lot and so has my confidence. As soon as you transfer that to tournament golf, you know the stuff you’re working on is working.”

Allan was hesitant to confirm if this alters the pre-season plan, but he’s desperate to learn from previous misjudgements.

“I made the mistake of playing between tours, playing really well for a year and not coming out with much.

“I have made a promise to myself that I will stick on the EuroPro until I achieve what I’ve just done and be certain that I can move on before floating between tours.”

When we discussed the standard that he should be vying off against next year, he was quick to point out he does not issue too much attention to “levels”.

“I try not to look at level; if I play the golf that I know I’m capable of, then I know I can compete with most golfers on different tours.

“I just need to keep things that work for me, stick to them, and see how far we can take this.”

Having had the privilege of watching and documenting his season-long journey, we can safely say there is no limit to James Allan’s potential – the golfer is destined for absolute stardom.

Next up for the PGA EuroPro Tour is a trip to Wales, where we will be visiting the awe-inspiring Machynys Peninsula Golf Club.

We’ll see you next week for the final event before a short hiatus from touring.