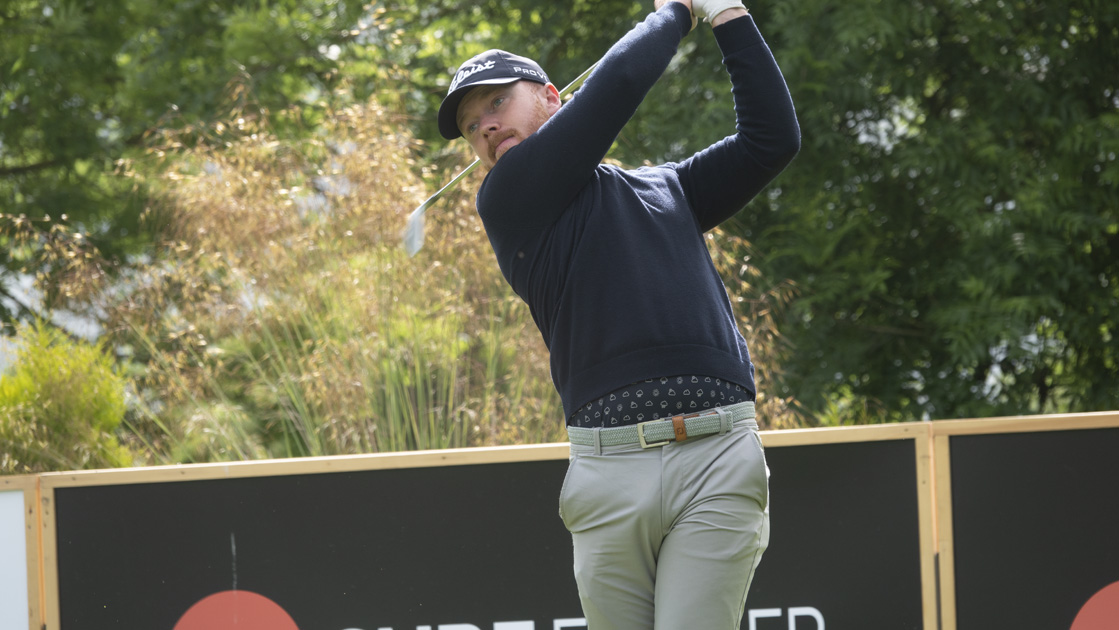 Please remember that the back nine of the final round will be broadcasted across our social media platforms on Friday!!

We could be destined for a new champion on the PGA EuroPro Tour as both Joe Brooks and Joshua McMahon top a jam-packed leaderboard.

Brooks has become an established and popular member of the PGA EuroPro Tour, but he’ll be looking to take the leap to the next step.

Brooks concluded his week in Newbury with an outrageously good final round, finding six birdies around a notoriously difficult track.

If he can replicate the quality he has demonstrated across his previous three competitive rounds, he could be grasping a EuroPro trophy for the first time in his career.

McMahon is a quality player in his own right, having threatened this kind of form previously this season.

His second outing at Donnington Grove resulted in the lowest round of the week (66), and he has taken his newfound confidence to Oxford with him.

However, he looks to have firmly moved passed that disappointing beginning; it will be interesting to see how we fares in the final grouping.

Although the leading duo hold a slender advantage, it won’t be without stern opposition, with James Allan cheerfully reminding everyone of his remarkable talent.

The Essex-based golfer triumphed in the opening event of the season and he’s sitting pretty in the Order of Merit rankings, topping that chart.

He shot the joint-lowest score of the tournament to date, with Rhys Nevin and Nick Marsh mirroring his astonishing 64 (-9).

A win here would place the Englishman enviously well for the remainder of the season; he’ll be well aware of the gigantic benefits that would naturally follow victory on Friday.

Those residing near the top of the leaderboard have showed great prowess with their putting skills this week, with scoring rates generous throughout. Joe Brooks is looking for his first tour title

For that reason, it’s important not to remove anyone from contention who is mindfully hovering near the pace-setters.

Robbie Morrison is also T3, sharing that position with two others.

The Scotsman has previously shown his ability to go low when required, so we can expect an interesting conclusion to his tournament – largely thanks to his explosiveness as a player.

This will be the third consecutive week that Marsh will tee off within the final four groups, and he is without doubt one of the more consistent golfers on tour this year.

He tied the lowest round of the week alongside Nevin and Allan, notching seven birdies and a sole eagle on his way to that feat.

If we consider the unbelievable rate of scoring – in contrast to other venues this season – an exceptionally low score will be needed to separate this wide range of talent.

There are a further five players two strokes off the lead; Greg Dalziel, Scott Gregory, Luke Joy, James Wilson and Rhys Nevin all shot deep into the 60s to earn valuable contention experience.

From there, there is a group of six players who are at 10-under and three shots back from the co-leaders.

The cutline was at six-under, which is without doubt the lowest of the season to date.

It’s unfathomable to think that five-under would not be enough to progress into Friday’s finale, but it also highlights the peerless talent littered throughout developmental golf – all patiently awaiting their golden chance to strike.

Another stuffy day is expected for Friday, where low scores will surely be inevitable.

Considering the volume of those in contention, the winner could materialise from an array of scenarios tomorrow; we are looking forward to seeing who wants it the most.

Victory so early into the season alleviates the stresses that naturally come from the latter stages of the year.

Whoever the eventual champion is, he could very well look back at this event being the spark needed to kickstart his season.

Keep a keen eye on our socials tomorrow, as we will be reporting from the course and Live Golf Now will also be broadcasting the back nine in its full duration.