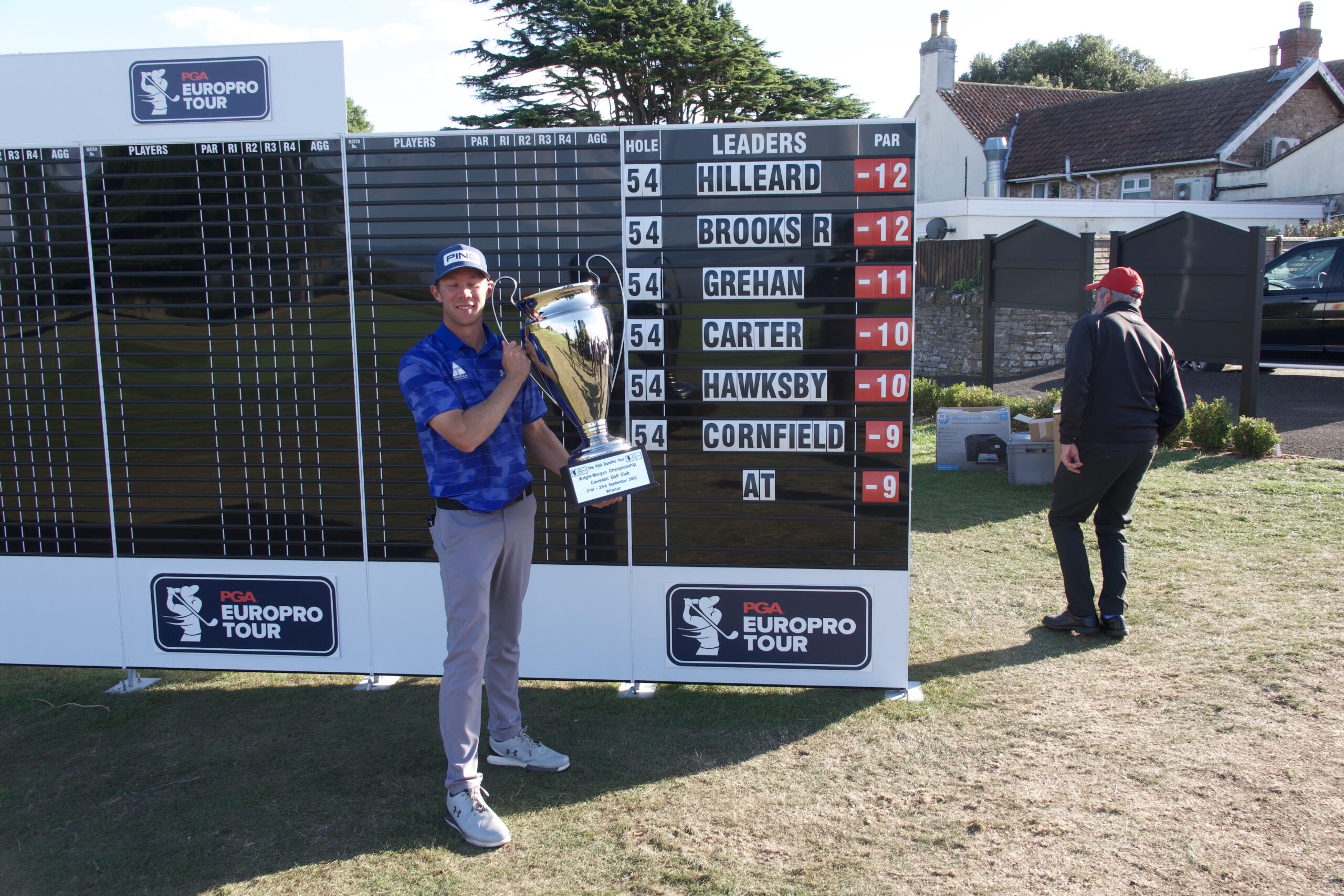 Josh Hilleard defeated a spirited Ryan Brooks on the first playoff hole; the Englishman has jumped to 4th in the Order of Merit.

Walking down the 17th fairway at Leven Links last week, Josh Hilleard disclosed that he was looking forward to the season concluding – which was a first for himself.

Any touring professional would be quick to admit that 15 gruelling weeks on the road, leaping from hotel to hotel, isn’t the best way to spend your summer.

There are moments, however, that make those long-winded journeys all worth it: victory.

Hilleard arrived at Clevedon – a layout he has acquired a vast amount of knowledge of – knowing one more win could take him to the Challenge Tour.

“The Challenge Tour is a step above – it’s across Europe and not just the UK – and it’s also another chance to test yourself against those guys,” he revealed.

“This tour is very, very competitive, but it would be nice to go up.”

There was one overwhelming obstacle that stood firmly in his way: a fully-loaded field with the same aspirations as himself.

Whilst Clevedon Golf Club offered scoring opportunities throughout, not many could have forecasted the two-time champion’s blistering beginning.

“I came here without any decent form in the last few weeks, so to go out and shoot that score during round one was a surprise.

“It was then about having to build on that and it was quite hard to replicate another -9 in the second round!”

His second outing would bring further success, but not quite emulating the highs from Wednesday’s exhibition.

Hilleard posted 67 (-4) to extend his reign at the top, but Thursday was Ryan Brooks’ time to shine.

The Tamworth-based golfer occupied 4th in the Order of Merit before this week, but his last top 10 finish came in July – and time was running out.

A steady opening round of 68 (-3) brewed confidence to attack during the second day and the onslaught quickly began.

Brooks made the turn in 29 (-7), extending his final score to -8 for the day as Hilleard’s advantage started to shrink.

The nerves could be felt entirely through the final group on Friday, as all three would have envisioned brighter openings.

Hilleard, who had only dropped one shot during his previous 36 holes, started his morning with a bogey at the 1st. He soon recaptured that stroke at the following hole, where Rhys Nevin would effectively remove himself from contention.

The eventual champion remained in the lead during the front nine, but the turn would soon see a threat to the title.

“There was a different wind today,” Hilleard noted before continuing. “It was playing down off the left for the previous two days so a lot of guys could get there quite easily with woods – I chose to lay back but still took advantage of it both times.

“The wind was straight into and off the right; I took the same strategy from the previous two days but I hit a bad second shot and Ryan earned a two shot swing, which wasn’t ideal.”

After the 13th hole, Brooks’ lead was two strokes and it looked like an unlikely comeback was on the cusp of reality.

A bogey at the par-4 15th – which played at 4.26 for the week – saw his lead slashed in half but remain intact, nonetheless.

It wasn’t until the 17th hole before the leading duo would be occupying top spot collectively.

“I was definitely chasing the lead, but I was in a state where I was in control of my golf ball and I had an idea where I was going to hit it.

“That was a play [driver off 17th tee] I have done all week – I hit driver all three days and in the Pro-Am – but my wedge game is what won me the tournament this week.”

He’s not lying either. Hilleard was sensational from the 50 – 100 yard range, which was the skill required for playoff glory.

Only one additional hole was needed to separate them, with both hitting much better drives than they did during regulation play.

“When someone hits a good shot before you, it actually makes the fairway wider because you can see where you’ve got to hit it, so I basically followed him.

“I then had a nice advantage of getting to play first as Ryan hits it miles, so it was quite nice to be able to put the pressure on him.”

Whilst Brooks found the fairway, Hilleard was in the semi but had a decent enough lie to get some action from the ball.

His excellent effort resulted in a five-foot putt for the championship once his opponent’s slid by – which was duly sunk.

Once Hilleard got back to level terms, he felt a surge of confidence as he trudged to the 18th tee for a replay.

“The playoff was quite nice because you can only finish second,” he noted as his sense of accomplishment took over him.

“If you play nicely you’ve only got to beat one man instead of a whole field whose progress you’re unaware of – it becomes a match play scenario.”

His victory has propelled him to 4th in the Order of Merit and promotion looks likely, although not confirmed due to the unpredictability of this abnormal season.

Regardless of future events, Hilleard is proud of what he achieved during his self-confessed greatest ever season.

“I’ll look back and say this is the best I’ve ever played over a season by a long shot; winning once was great but to be able to do it again in the same year is better.

“To execute a season in this fashion has been great. I can’t say I’ve been unsuccessful at all, I’ve been impressed.”

The end of the regular season means we are saying goodbye to a large proportion of this year’s tour, as only the top 60 progress to Lough Erne.

The Faldo-designed golf course will be the setting to decide which five players will graduate to the Challenge Tour.

James Allan, Dermot McElroy and Michael Stewart can be overwhelmingly confident in their chances of going up, with their presence across Europe next year all but confirmed.

We’ll see you in October when an entire summer’s worth of grind and dedication will present its ultimate outcome.