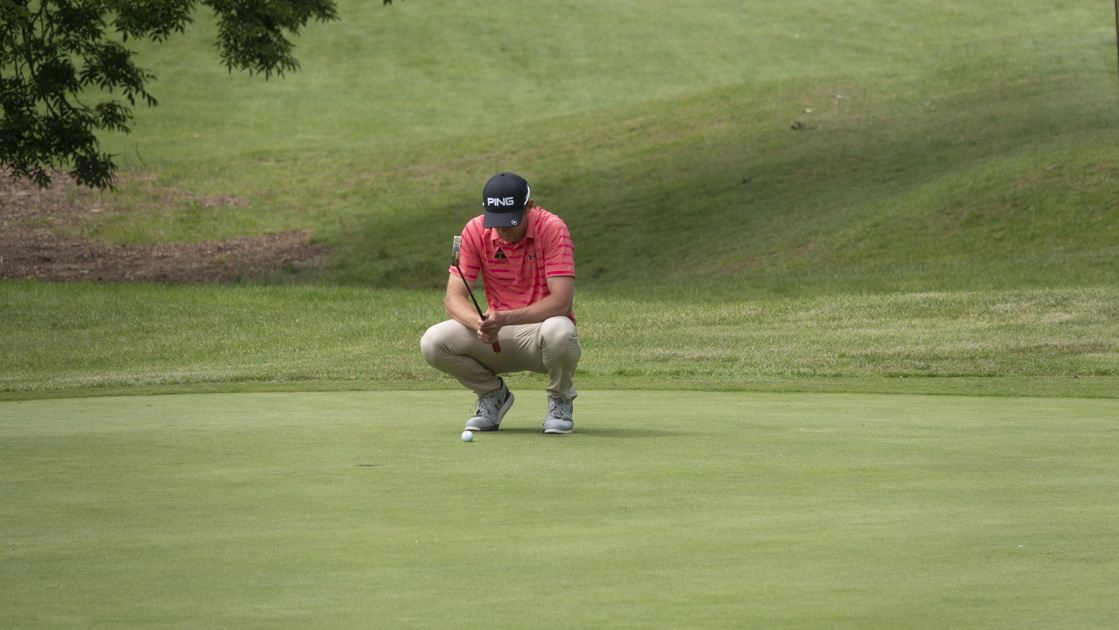 Josh Hilleard made it successive rounds in the sixties to establish the possibility of becoming a wire-to-wire champion.

Josh Hilleard played tremendously for his 62 (-9) yesterday, which was further supported with a score of 67 on Thursday.

The Englishman experienced a relatively uneventful front nine, carding the one birdie at the par-5 2nd.

His two closest competitors are Rhys Nevin and Ryan Brooks, a duo that have both enjoyed positive second outings.

They are currently two shots short of the lead, but Nevin’s scores of 63 and 68 have issued him his greatest chance of victory to date.

Brooks is also firmly in the hunt and he can thank his phenomenal second round performance for that.

He posted -8 for the middle round, which has seen him surge through the leaderboard and share the final grouping for the first time this season.

Stuart Grehan and Mark Young are in T4 with a tournament score of -9.

Dermot McElroy has missed only the third cut of his season as he will not feature during the final day at Clevedon Golf Club.

The Northern Irishman has already secured his Challenge Tour card, which will undoubtedly sweeten the long trip home.

Michael Stewart is in the same boat, although the Scotsman will be progressing pass the cut line.

Stewart has been simply delightful throughout the entire campaign and any additional money is a pure bonus.

Brandon Robinson-Thompson is the highest placed player to have not confirmed their future; a round of 72 (+1) has taken him backwards.

Robinson-Thompson threatened the overnight lead during yesterday’s performance, but he has failed to build on the momentum from Wednesday’s display.

Ryan Brooks demonstrated why he is ranked so highly in the Order of Merit following an outrageously good round of golf.

Brooks recorded nine birdies and dropped only one shot all afternoon; a second seasonal title is now on the cards.

Pavan Sagoo had plenty of work to do today if he was hoping to make the cut; the former winner has fallen short in that quest.

Sagoo will have one final chance to earn his Challenge Tour card at Lough Erne – but there’s only two cards to play for.

Jack Davidson made it back-to-back rounds in the sixties as he is positioned within the top 10 heading into the final round.

The Welshman has been superb in the tournaments he has featured in, failing to miss a single cut in 11 events!

Exactly 50 golfers have progressed past the cut, with a tournament score of -2 being enough to survive the chop.

The first group will be teeing off at 08:00, with the leading trio departing the first tee at 10:50.