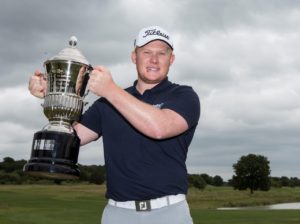 Chris Lloyd cemented his place at the top of the HotelPlanner.com PGA EuroPro Tour’s Race To Amendoeira with a play-off victory in the PDC Golf Championship at Studley Wood Golf Club in Oxfordshire, his second consecutive win.

Dalgliesh was four behind at the start of the round and dropped to -7with bogeys at 5, 6 and 8. However, a birdie at 9 kick-started his round and despite dropping a shot at the 13th he completed the back nine three-under-par with birdies at 15, 17 and 18 seeing him leap back up the leaderboard.

“I feel like I aged about 20 years today – it was hard work out there,” said Lloyd, who also takes home a brand new Motocaddy S3 PRO electric trolley with lithium battery, Bushnell Pro X2 Range Finder and Bolle sunglasses.

“I haven’t really been swinging it that well this week and there were some pins tucked away in slopes. With the wind up as it was it made it so hard to hole putts. I had a feeling I might get it done with two par fives to finish and my third shot on 18 in regulation play in a way settled me down a little bit, and I was a lot freer in the play-off.

“There is still a lot of the season to go and plenty of events to try and win. The £250,000 bonus is closer now but first and foremost my goal is to win the Race To Amendoeira.”

James Maw carded a final-round 71 to finish third on -10, despite a seven at the par-three fourth while three players shared fourth on -9.

Highlights of the PDC Golf Championship will air on Sky Sports on Tuesday, July 4.

Preceding the GRENKE Championship is the Ablrate.com Shoot-Out, where 26 EuroPro stars will have one chance to make a hole in one on Cumberwell Park’s par-three course. The first player to make an ace will walk away with £100,000.