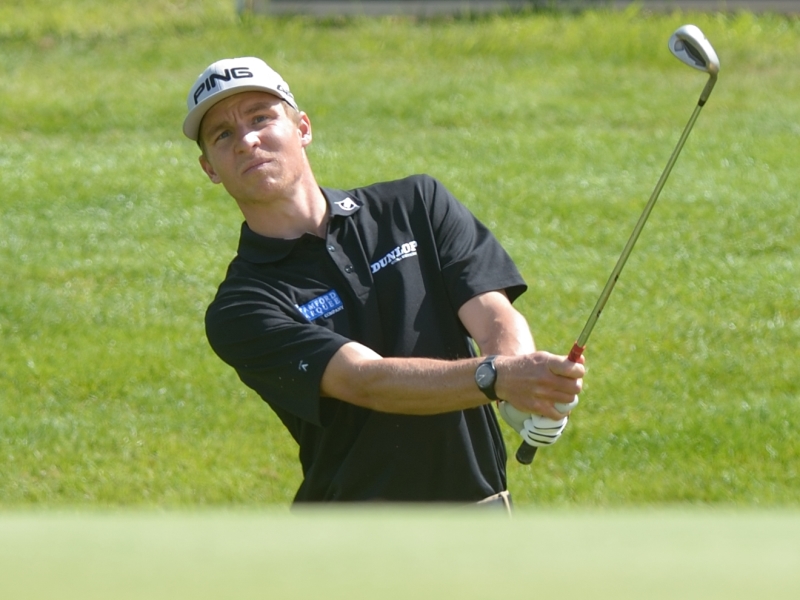 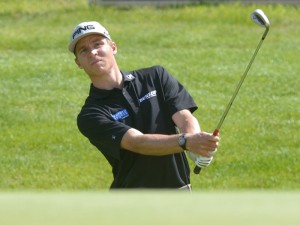 arryn Lloyd holds a one-shot lead over a close field ahead of the final round of the HotelPlanner.com PGA EuroPro Tour’s PDC Open at Chart Hills Golf Club in Kent.

The South African has shot rounds of 66 and 68 to lead on ten under with Alex Wrigley and Darren Wright one behind and Jordan Smith and Laurie Canter sharing fourth on eight under.

Ian Ellis is one of three players on seven under after he shot the tournament’s best round so far, an eight-under 64 to move from one over par and missing the cut to a share of sixth place at the end of the day.

South African Lloyd began the day in a share of the six-under-par lead with Tom Shadbolt, whose level-par second round 72 leaves him in a 15-way tie for ninth on six under.

Lloyd (Stamford Marquees) dropped a shot early on when he bogeyed the 2nd, traditionally the 11th at Chart Hills where the two nines have switched order for this tournament.

However he was soon at the top of the leaderboard again after he birdied the 3rd and had back-to-back par breakers at 6 and 7. Another dropped shot at the 10th could have cost him the outright lead, but birdies at 13, 14 and 17 ensured he signed for a four-under-par second-round 68.

Wrigley (Hartlepool Golf Club) and Wright (Golf at Goodwood) kept the pressure on the leader by finishing just one further back on nine under.

Wright is currently second on the Race To Desert Springs and a victory would all-but guarantee he concluded the season in the top five, a ranking which is rewarded with a 2016 Challenge Tour card.

His rounds of 67 and 68 were matched by Wrigley, who like Wright dropped just one shot in the second round.

A cut to the leading 50 players and ties has now been made with all those whose 36-hole score is two-under-par or better proceeding to play Friday’s final round, which will be filmed for a two-hour highlights package to air on Sky Sports on Tuesday, August 11.