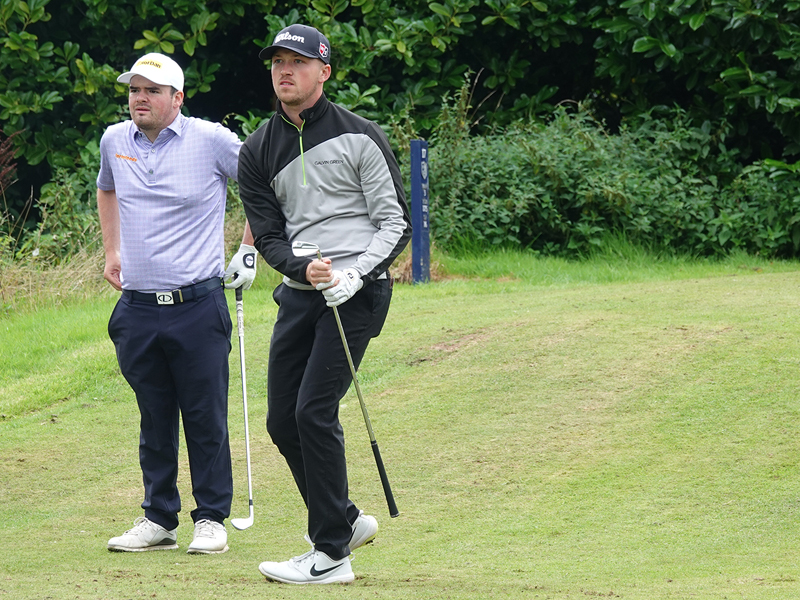 Richard Mansell, James Allan and Mitch Waite are tied for the lead at Macdonald Hill Valley Hotel, Golf, and Spa heading into the final day of play tomorrow in Shropshire.

Mansell (Beau Desert Golf Club) went seven deep for a round of 64 to lead by one stroke in a knock that included five birdies and an eagle and no bogeys.  Allan (Chelmsford Golf Club) was bogey-free as well with a round of 68 (-3) to go eight-under for the week.

Waite was the overnight tied clubhouse leader and the Filton Golf Club man kept it up for three under on day two to give him a share of the lead.

Trailing by one shot is Miles Collins (Stoke by Nayland Golf Club) who makes his first cut of the season in a second round that included five birdies and an eagle to balance out a few blips.

Sean Towndrow (Southport & Ainsdale GC / Golfing4Life) is tied for fourth with Sam Robertshawe (Arrmy GC/Puttenham Construction) who went tied for the lead earlier in the afternoon before dropping back and Todd Clements (Brocket Hall Golf Club) with rounds of 67 and 69.

John Parry (Harrogate Golf Club) was one of the highest climbers on moving day going five-under for 66 to move to eighth on the leaderboard with Nicholas Poppleton (Wath Golf Club) who was four under for his second round.

We will see the conclusion of play tomorrow at Macdonald Hill Valley with the fifty players plus ties making it through after the cut was made at level par.

Entry is free to watch at Macdonald Hill Valley Hotel, Golf, and Spa. Come and enjoy watching some of the rising stars of the game at no cost.

Highlights of The HotelPlanner.com Championship will air on Sky Sports Golf on 3, September 2019 at 20:00