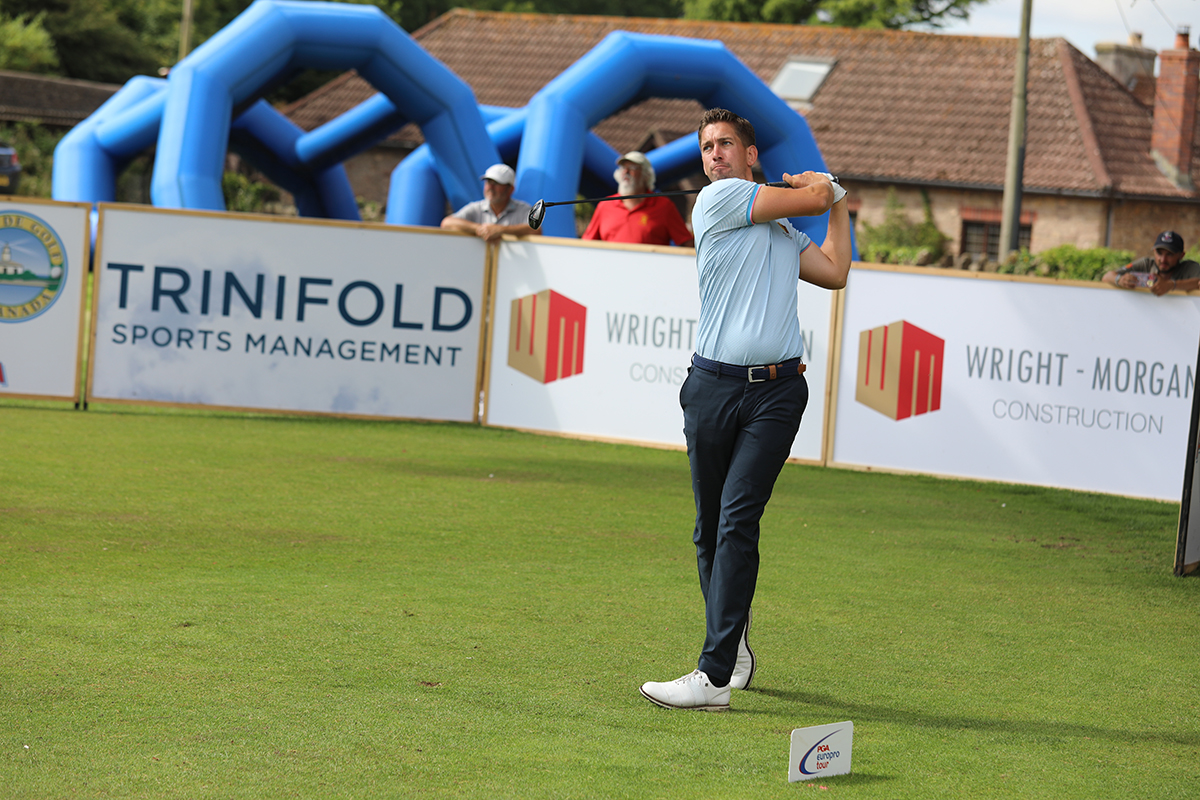 Home favourite Ashley Mansell holds a one shot lead going into the final day of The Wright-Morgan Championship at Clevedon Golf Club after a second round 67 (-5) to move to -14 overall.

Mansell (Clevedon Golf Club) fired a course record 63 (-9) yesterday to head into the second round at the top of the leaderboard and that’s where he will start the final day after a quieter day where scrambling was key to keeping the Somerset man on course for a maiden PGA EuroPro Tour title.

Things are tighter than overnight where Mansell had a two shot buffer with scoring deep through the morning and tailing off as the afternoon progressed. Two Scotsmen will be joining Mansell in the last group after Michael Stewart signed for a second round 66 (-6) and Kilmacolm Golf Club’s Robbie Morrison put down a 64 (-8).

Morrison is finding his feet back in the UK after only moving back 18 months ago from Australia: “Different weather. Different conditions. The grass is a bit different which sounds a bit weird but it makes a difference. But getting my feet back on the floor now.

Ash (Mansell) is a phenomenal player. -9 yesterday. I will just do my own thing. He is the guy to beat so just try to copy him!”

Mark Young (Longridge Golf Club) leveled Ash Mansell’s course record with nine under round of 63 to shoot up the leaderboard to be two off the lead at -12 along with Dan Brown (Romanby Golf Club / G4L) who shot 68 to go with his opening day 64. Young going out in 30 to put the foot to the floor before closing in with an eagle, two birdies and a  bogey.

Machynys Peninsula’s James Frazer is bang in contention once again three back from Mansell at tied sixth with Mitch Waite of Filton Golf Club and the USA’s Stephen Shephard. Waite the pick of the bunch with birdies on 11, 12, 13, and 14. Frazer meanwhile keeping things steady after a low 64 on day one.

The top ten as it stands is crowded with five at -10 including Joshua Grenville-Wood (The Els Club, Dubai) who had eleven birdies on his card as well as a double bogey and bogey to eventually settle for a 64. Gian-Marco Petrozzi (Trentham Golf Club) had a 67 for the second day in a row whilst Curtis Knipes (Chelmsford Golf Club) bettered his 68 from yesterday with a 66. Australia’s Ben Ferguson (The Vines) got things going on the back nine with an eagle helping him come in for 32 and David Langley (Trinifold Sports) kept himself in the mix with a two under round.

The cut was settled at five under for the third time this season with fifty-plus ties making the final day in Bristol.