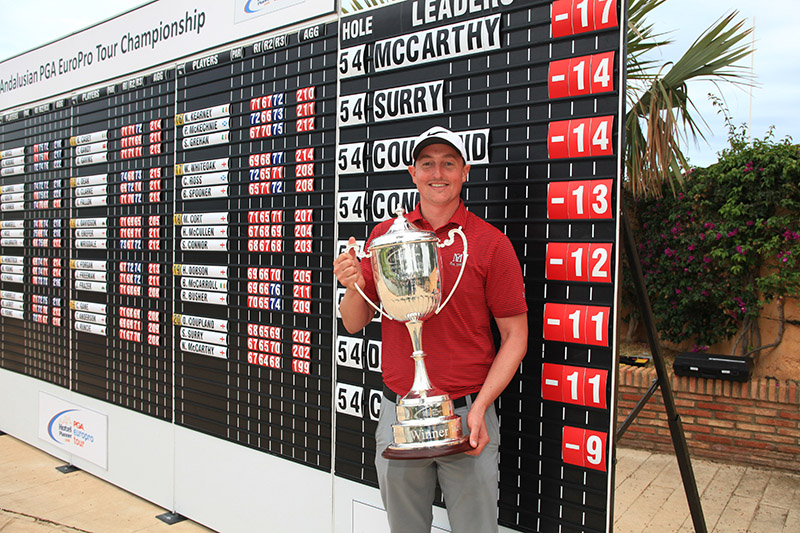 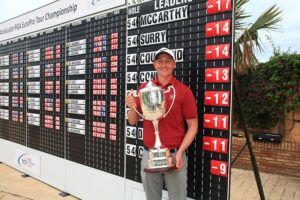 Nick McCarthy carded rounds of 67, 64, and 68 in a must-win finale at the Andalusian PGA EuroPro Tour Championship at Desert Springs Golf Club, Spain.

McCarthy (Moortown Golf Club) started the week 24thin the Order of Merit, needing a win and nothing less if he was to play his 2019 season on the Challenge Tour.

A second-round tournament low of 64 put him in the driving seat but with plenty of work and high-class golfers just a few shots behind as he embarked on what he anticipated to be a grueling round. However, McCarthy showed no signs of nerves as he flew out the tracks, picking up five birdies in his opening seven holes to open a three-shot cushion over the field.

But, the birdie train de-railed at the ninth, as McCarthy dropped shots on the 9thand 11thwhilst Surry (Cumberwell Park Golf Club) drew level for the first time in the round. McCarthy remained unphased and bounced back with an excellent birdie at the 12th, before collecting his final birdie of the day on the 17th.

A stunning approach shot into a tricky pin, positioned at the back of the green, gave him an easy birdie and a four-shot cushion heading down the 18thas Surry could only manage a bogey to fall back to -14 with the chasing Coupland.

And with the ball in McCarthy’s court, barring complete disaster on the last his mission was achieved, a bogey was enough to give him a three-shot win, and more importantly the coveted Challenge Tour card he was chasing.

“To go out leading, and to now be standing here with this trophy is the best feeling ever.” Said McCarthy.

“I won’t lie I felt the pressure, and there were a few things running through my head, whether I should attack it or not, but I just tried to play as I did in the last two rounds.

“After my approach into 17 I started to believe that it was going to be my day, especially as Steve had found a bunker I thought I would at least be heading down the last with a three-shot lead.

“I relished being in a final group with two quality players beside me, I felt we pushed each other along today as there were a lot of birdies out there. It’s great to finally get my hands on a bit of silverware, I’ve had some chances over the years and not quite got the win so to be stood here with this trophy is great.” 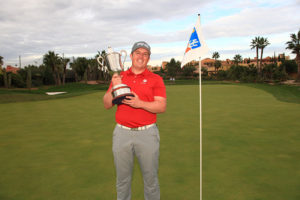 Despite not clinching the top spot in Desert Springs, a T2 finish for Dave Coupland (Woodhall Spa Golf Club) was more than enough to give him the 2018 Order of Merit crown after Mark Young had leapfrogged him with a win at Tulfarris.

Reflecting on his stellar season, he said: “I think this is the best trophy you can win in a season, I set out at the start of the season with this as my target and I’ve done it.”

A staggering five top five finishes this season including two wins, would have people hard pushed to argue that Coupland was not a deserving champion.

“My game is about hitting fairways and greens, and if I can get the putter working then that’s when I can really go low. I’ve worked really hard with a number of coaches this year and to miss only one cut and play every event in the calendar it’s an achievement I’m really proud of,”: said Coupland.

Scotland’s Craig Ross took the Rookie of the Year title, after a superb season which included a win and five top fifteen finishes in 2018.

“It’s been a really good year, I had goals to try and finish in the top five this year and fell just short of that but I’m still really happy with the Rookie of the Year title. There’s much more to improve on but this year is a great foundation to build on,”: said Ross.

He added: “It’s been a great week here at Desert Springs, I lost my way towards the end but there are some great things I can carry forward into European Tour Q School next week.” 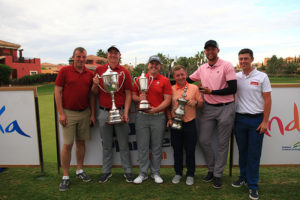 Joining McCarthy and Coupland as graduates onto the Challenge Tour next season include Boston’s Billy Spooner, a two-time winner this season; Joe Dean (Hillsborough Golf Club) who was the highest ranked player (5th) to not win this season, and Longridge’s Mark Young who came tantalisingly close to the £250,000 four-win bonus on offer this season but will still take three wins under his belt as he bids to earn a European Tour card through Q School.