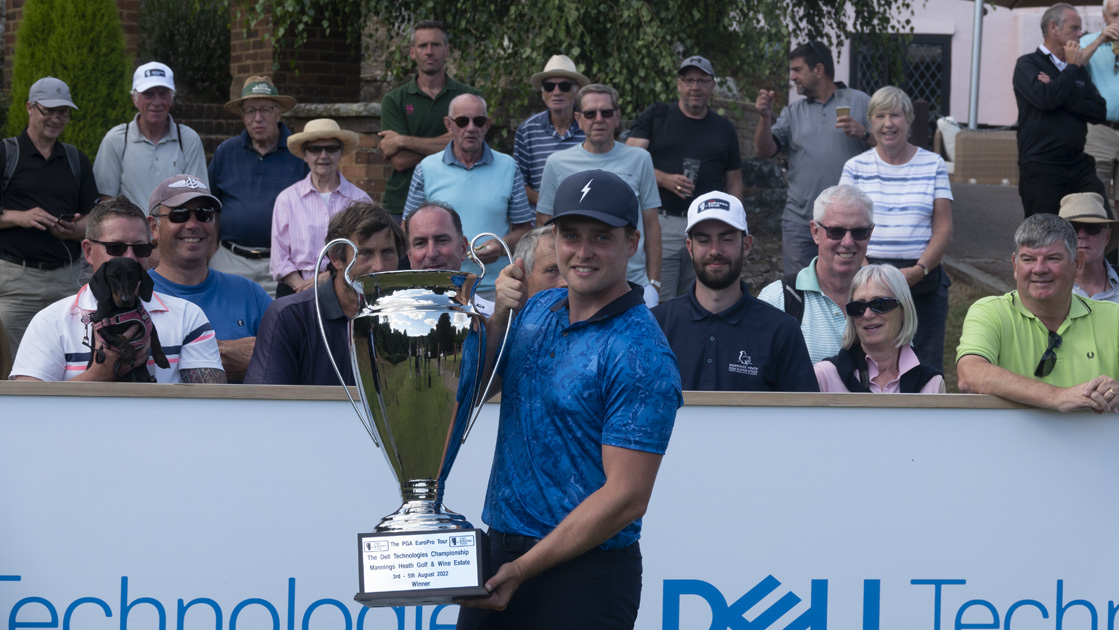 Following five brutal months and 16 gruelling tournaments, the 2022 PGA EuroPro Tour season will come to an end after our trip to Lough Erne Resort.

After the conclusion of play on Friday, five golfers will be issued with Challenge Tour cards and ready to tackle the next stage.

The current top 5 have all experienced the sweet taste of victory this year – including two multiple champions – but the hard work starts now.

Without further ado, we present to you the top 5 golfers of the 2022 campaign so far – but will they remain in the hotseat come Friday evening?

James Allan staked his claim for a Challenge Tour card very early into the season; the Englishman was crowned champion of the Cubefunder Shootout back in May.

Allan was brilliant during the opening event and despite dropping shots coming home, he managed to hold his nerve to record the the first EuroPro Tour title of his career.

He effectively confirmed his presence on the Challenge Tour next year following a glittering display at Mannings Heath to become the first multi-champion of the season.

Allan has been aware of his fate since August, but he’ll be eager to close out the season as the number one player for the year.

Fun Fact: James has played on the Challenge Tour before, with a best result of T35 in 2020.

Whilst Michael Stewart currently occupies second in the Order of Merit, it’s difficult to determine a more consistent or impressive figure within the PGA EuroPro Tour ranks this year.

Prior to his win at Leven Links, the Scotsman was placed within the top 5 of the seasonal leaderboard without a single victory!

Nine top 10s in only 13 events is incredible – and the only cut Stewart missed this season was the opening tournament at Harleyford Golf Club.

We should also mention that Stewart has progressed to Stage Two of DP World Tour Q-School, and has every chance of earning a DP World Tour card if he can negotiate the following stages. There aren’t many more explosive players than Dermot McElroy, who seemingly has the ability to post low scores at any given moment.

The Northern Irishman has finished runner-up/T2 on four occasions this year and despite only playing 10 events, he finds himself amongst elite company.

There is a lot of special talent on this tour and throughout third-level development golf as a whole, but the leading trio have been a cut above the rest, and it is highly likely that all three will progress to the Challenge Tour this year.

Fun Fact: Following Dermot’s victory in the CPG Classic, he was the most recent champion on both the EuroPro and Clutch Pro Tour! Dermot McElroy won the 7th event of the campaign

Josh Hilleard is the perfect example of taking your opportunity when it presents itself.

Considering the Englishman has only finished in the top 10 twice – but won on both occasions – his conviction should be applauded.

Having triumphed in the second event, he then closed the regular season out in style after beating Ryan Brooks in a playoff – which pushed him one above his competitor in the Order of Merit.

As you may have noticed however, there is a significant gap between the top three and the rest of the field, which means Hilleard will need a strong performance in Northern Ireland if he is to be one of the five to go up. After missing the cut at the first event of the year, Ryan Brooks responded emphatically – reeling off three top 20 finishes before winning the fifth event of the season.

His only victory came at Cumberwell Park, where he defeated Jeff Wright, Maxwell Martin & Michael Stewart in a four-man playoff.

The Tamworth-based golfer will be heading into Tour Championship week knowing a strong performance should be enough to secure his Challenge Tour card.

Fun Fact: Ryan has featured in two of a possible three playoffs this year, winning one and losing the other. Despite the top 5 heading into the final week with an advantage, the remainder of the field will be aware that victory should be enough to catapult them into the coveted top 5.

After one lengthy season, an entire summer’s worth of grind and commitment comes to a head at Lough Erne – who will be realising their dreams at the end of the week?