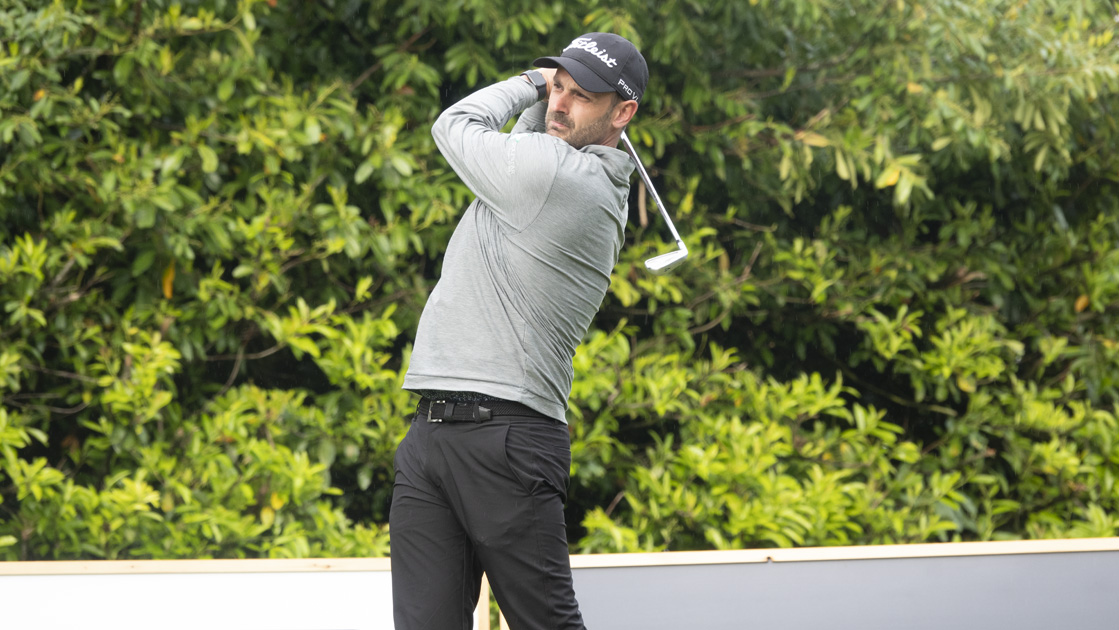 It would appear that Michael Farrier-Twist’s elongated spell away from the PGA EuroPro Tour has sharpened up his game.

Prior to this week, Farrier-Twist had only featured in two events this campaign – missing the cut on both occasions.

Yesterday’s score of 68 (-3) set the stage for the grand finale that would swiftly follow only 18 hours later.

Starting from the 10th tee, two birdies in the opening three holes were followed by another two, enabling him to make the turn in 32 (-4).

Whilst his latter nine failed to match the excitement of the first, birdies on 1 and 8 have pushed him into the outright lead.

He certainly isn’t over the line yet however, as both Maxwell Martin and Bailey Gill (-8) are just one shot back and will be plotting their path to the trophy.

Martin, alongside the leader, enjoyed a bogey-free day around Cumberwell Park, with both men notching six birdies through 18 holes.

The Englishman is 1-2 for cuts made this season, with his sole Friday appearance culminating in a T47 finish – inspired by a round of three-over.

Gill is the final member of the three-ball hoping to convert his promising position into victory. Bailey Gill has carved an excellent opportunity for himself

He’s battled his way into some form, having missed the cut at the opening two events before bouncing back with T22 and T23 finishes.

A troubling start was quickly redeemed, with a birdie at 9 minimising the damage as he turned the corner in 36 (+1).

More disappointment at the following hole was immediately dealt with, as an eagle at 11 was further sweetened by a birdie at 12.

His two late birdies, acquired at 17 & 18, quickly brought him into the conversation and he can thank that late rally for his opportunity tomorrow.

Ryan Brooks stands alone in 4th, but there may be an element of disappointment with today’s outcome.

He was co-leading with Pavan Sagoo after the opening round, carding 65 and further strengthening his significance on this tour.

However, a -1 70 opened the door for those around him, although a two-shot deficit can easily be overturned on this course.

There are two further golfers behind Brooks, with Joshua McMahon and Jacob Oakley sitting on -6 and three back from Farrier-Twist.

McMahon has become quite a prominent player over the last three weeks, with his reputation further refined after another excellent tournament here. For Oakley, this is fairly new territory based on his seasonal results, although he did finish T13 during the second event of the campaign.

He’s 2-2 for cuts and he’ll be excited to head into a Friday knowing he’s potentially four hours away from glory.

It becomes more clustered beyond the top 6, with 11 players in a tie for 7th at five-under.

The cutline was two-under but that was only thanks to Thomas Plumb, who finished birdie-birdie to send 13 players home.

For a long time, it was looking like 60+ players would progress past the cut for the first time this season.

Thankfully, there will be a one-tee start tomorrow as there is no threat of dangerous weather.

The first grouping will be a two-ball and plumb’s reward for his late burst is an 08:00 tee time, partnering Welshman Jack Davidson.

From there, three-balls will follow and the leaders will be starting their final round at 10:50.

We will be bringing you all the latest developments throughout the day, with extensive coverage of the leading groups – so it’s important you’re following us on our social media platforms.