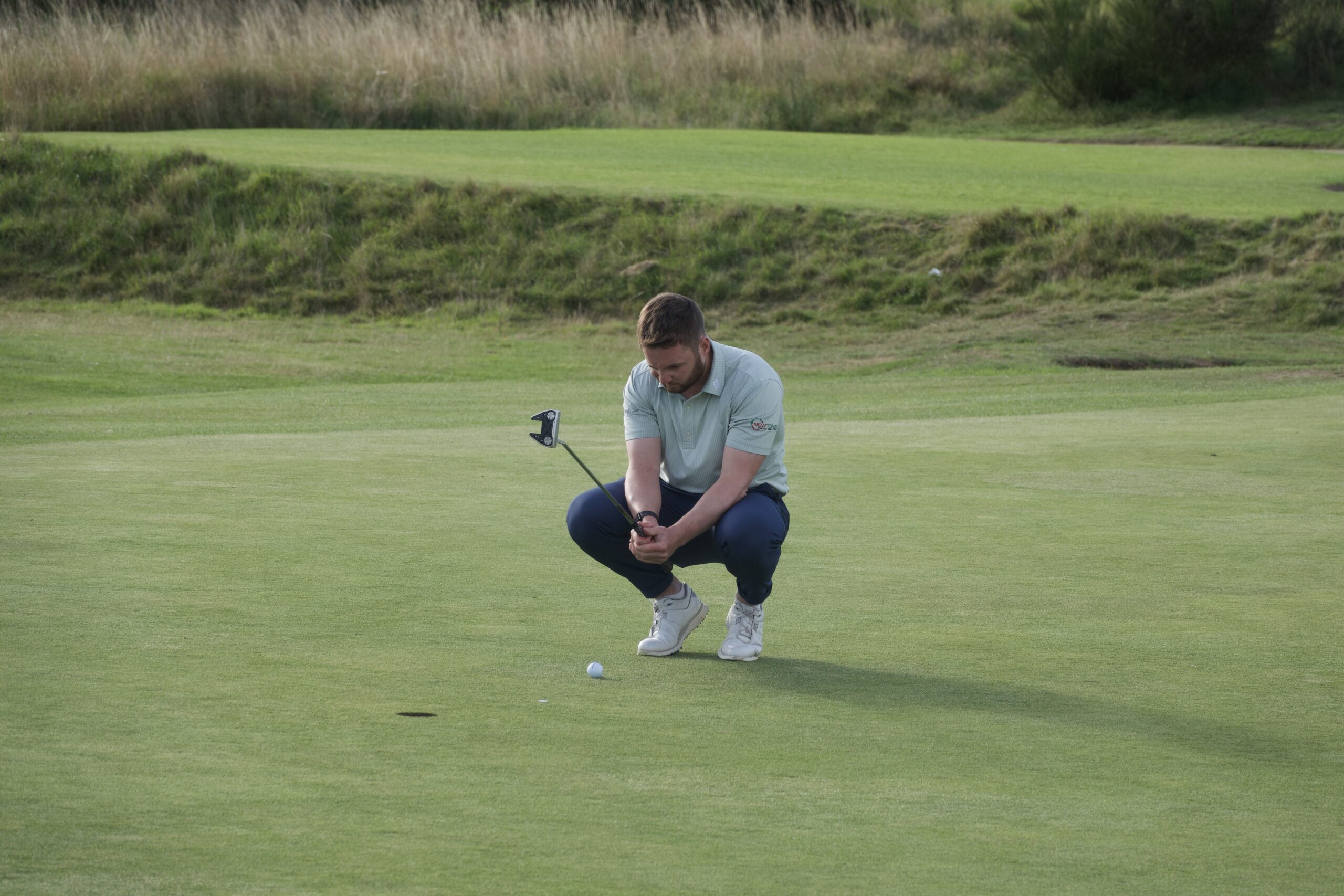 Michael Stewart’s bogey-free 62 (-8) has pushed him into the outright lead at Leven Links.

Michael Stewart’s phenomenal season-long form has continued in Leven, as the Scotsman produced yet another masterclass.

Starting from the 10th tee, he enjoyed a relatively quiet opening nine, birdieing 10 and 12 as he parred the remaining seven.

He shot into life during the latter half however, with four consecutive birdies from 1-4 before two more at 6 & 7.

Remarkably, Stewart is yet to win on the EuroPro this year – despite being 4th in the Order of Merit – and he is long overdue champion status.

There are two players two shots back, with both Nick Watson and Brandon Robinson-Thompson posting 65 (-5) to bolster their winning chances.

Watson joined Stewart in recording a blemish-free round, whilst Robinson-Thompson is a mere 18 holes away from confirming his Challenge Tour card.

That victory, which would see him leap to 2nd in the Order of Merit, will be difficult to come by as a spirited Stewart seeks his maiden title of the campaign.

Greg Dalziel and Curtis Knipes, who were T2 after the first round, failed to build on their openings as they both shot level par for the day.

James Allan, leader in the Order of Merit, has missed only his third cut of the season.

The Englishman posted 72 (+2) today, which has left him two shots short of the cut line.

Dermot McElroy will have taken a leap towards the successive stage after finishing T2 last week, and he has further strengthened his standing at Leven.

The Northern Irishman produced a score of 66 (-4) today, which sees him sneak into the top 10 at T8.

Brandon Robinson-Thompson has a glorious opportunity of not only adding a second seasonal title, but also confirming his place on next year’s Challenge Tour.

After experiencing a fantastic start to the campaign, Robinson-Thompson hasn’t finished in the top 10 since The Lancer Scott Championship more than a month ago.

Michael Stewart, however, will pose a troublesome obstacle for Robinson-Thompson, as the Scotsman continues his hunt for a title.

Stewart, who fell agonisingly short during a playoff last week, will certainly believe that his time has come.

Ryan Brooks will progress past the cut, but his 68 (-2) results in him making the final day on the number.

Nevertheless, the Tamworth-based golfer will know that tomorrow issues him with another chance of earning valuable Order of Merit money.

Paul Maddy has also made it past the cut, but he has work to do if he wants to elongate his four-event run of finishing within the top 10.

The Englishman could only post 69 (-1) today, which saw him lose ground on a large proportion of the field.

Jack Davidson’s score of 67 (-3) was enough to make the cut, but his tournament standing of -5 means that victory is unlikely.

The Welshman was pushed outside of the top 5 in the Order of Merit, but he has two more final opportunities to regain his position.

Pavan Sagoo would have been eager to build on his 67 (-3) from yesterday, but the Englishman could only muster a one-under 69.

He’ll be involved on Friday, but a second championship of the season will surely have to wait.

A total of 58 players have made it into Friday, with the cut line at -3 for the two rounds.

The first group will be teeing off at 08:00 on Friday morning, with the final trio taking to the course at 11:20.