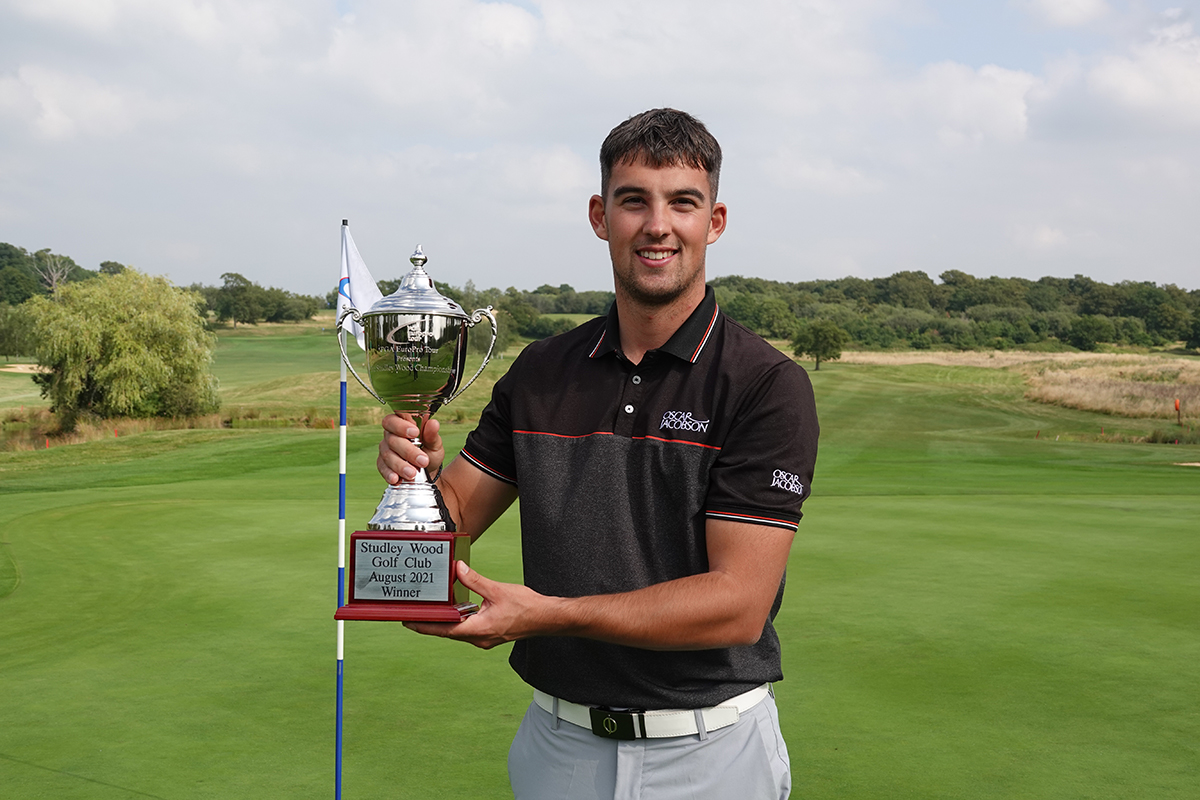 Mitch Waite has won The Studley Wood Anniversary Championship by three shots to secure his second win of the season on the PGA EuroPro Tour.

Waite started the day tied for the lead with Tom Sloman at -16 after back-to-back 65s but immediately found himself with work to do on the final day after a double bogey on the third but thereafter he cruised.

When the Filton Golf Club representative hit the 17th tee he was tied for the lead with Jack Doherty but made lightwork of the last two holes with a birdie at 17 and a huge eagle on the 18th to in the end lay down a marker on the journey to the upper echelons of the game Waite is clearly on.

He said: “It was hard work to start off with but it always is when you’re trying to win. In all fairness to myself, on the back nine, I just ground it out with two key up and downs on 14 and 16, and that allowed me to have a cushion coming down 18.”

“I always said that when I got my first one the floodgates would open. I think a first, a second, a third, and a first again warrants that quote I suppose. Next week is a new week and you’ve got to go again. Golf is a strange old game when you’re playing well you have to try and cash in.”

Waite on all but securing Challenge Tour status: “We’ll go to those last two events and try to win them and then there will be no issues.”

Rowallan Castle Golf Club’s Doherty had put down a blistering back nine of 32 to sign for a final round of 66 which had taken him in the clubhouse as tied leader with Waite still facing the final two holes but it did prove enough for a solo second finish for his best finish of the season.

Sloman (Trinifold Sports) had started the day with a share of the lead as mentioned but he was always battling heading into the back nine two over. He did make a comeback as sorts on the back nine though, with back-to-back birdies to finish and finish level tied for fourth with Paul Maddy. Maddy of (Gog Magog Golf Club) also had his best finish of the season to date with a 67 on the final day.

Taylor Carter had it going with a final round of 66 to secure a top ten finish and a place in the field at Leven Links next week. That 66 had briefly given him a share of the lead earlier in the day but in the end settled for a tie of sixth at -15 with David Hague (Malton & Norton Golf Club), Matthew Nixon (Sandiway Golf Club), and William Harrold (Sheringham Golf Club). Harrold ruing bogies at 12 and 17 that curtailed his title efforts.

The Tour heads to Scotland next week for the penultimate tournament of the regular season at Leven Links for The Motocaddy Masters.

Highlights from The Studley Wood Championship at Studley Wood Golf Club will air on Sky Sports Golf on Tuesday 14, September at 6 pm with several other showings scheduled. See the full where to watch guide here.