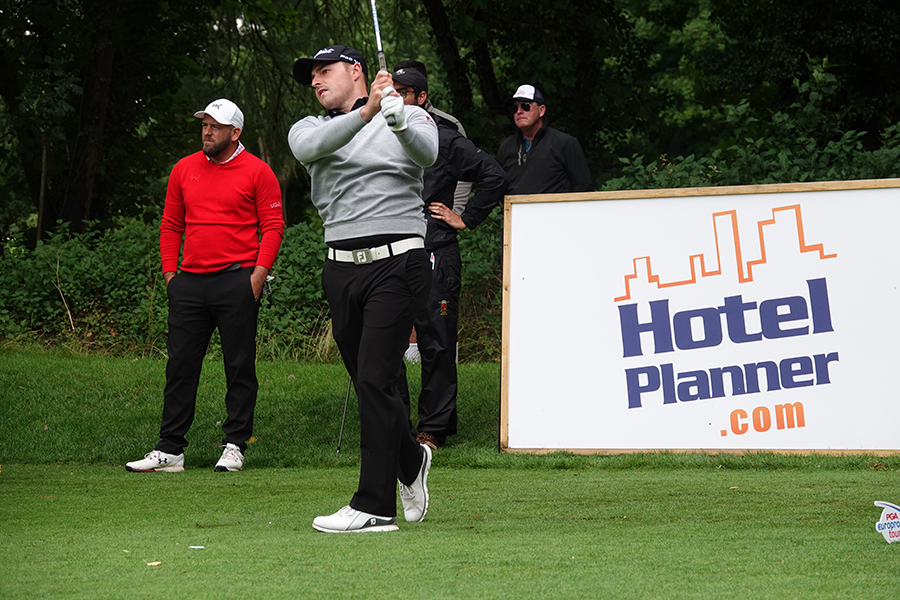 A torrential downpour across the morning caused play to be suspended from nine up until early afternoon as the course faced the brunt of conditions with the greens especially coping well.

When play resumed, the last of the morning groups were set off before the afternoon groups finally got out from five o’clock onwards. Play was eventually called for the day at eight o’clock due to bad light.

The remaining of the second round will be played first thing tomorrow morning (Thursday, 15, August) before the final round of play will commence afterward to make sure all three rounds are played.

Moore (Kedleston Park Golf Club) managed to complete his second round of 69 (-3) for another bogey-free knock leading over Ryan Harmer by two strokes.

Harmer (Brokenhurst Manor Golf Club) carded a second-day score of 68 (-4) to bring himself into contention and the best score of the day with four birdies.

Poppleton and Harrhy last recorded scores on three and six respectively with Poppleton level par and Harrhy two under.

Overnight leader, James Frazer (Machynys Peninsula) is tied for sixth on six under after a second round of 73 (+1) whilst John Parry (Harrogate Golf Club) and James Webber  (The Rayleigh Club) were level par.

Daniel Jennevret and Jack South (Hagley Golf Club/Taymar Homes) are tied for sixth both out on their second rounds on two and level par.

The second round will continue at 7 am tomorrow with a draw made afterward as normal after the cut before the final round of play will begin at 11:30 am on a shotgun start.

Entry is free to watch at Frilford Heath Golf Club. Come and enjoy watching some of the rising stars of the game at no cost.

Highlights of The HotelPlanner.com Championship will air on Sky Sports Golf on 27, August 2019 at 20:00

Three tied for the lead at Frilford Heath