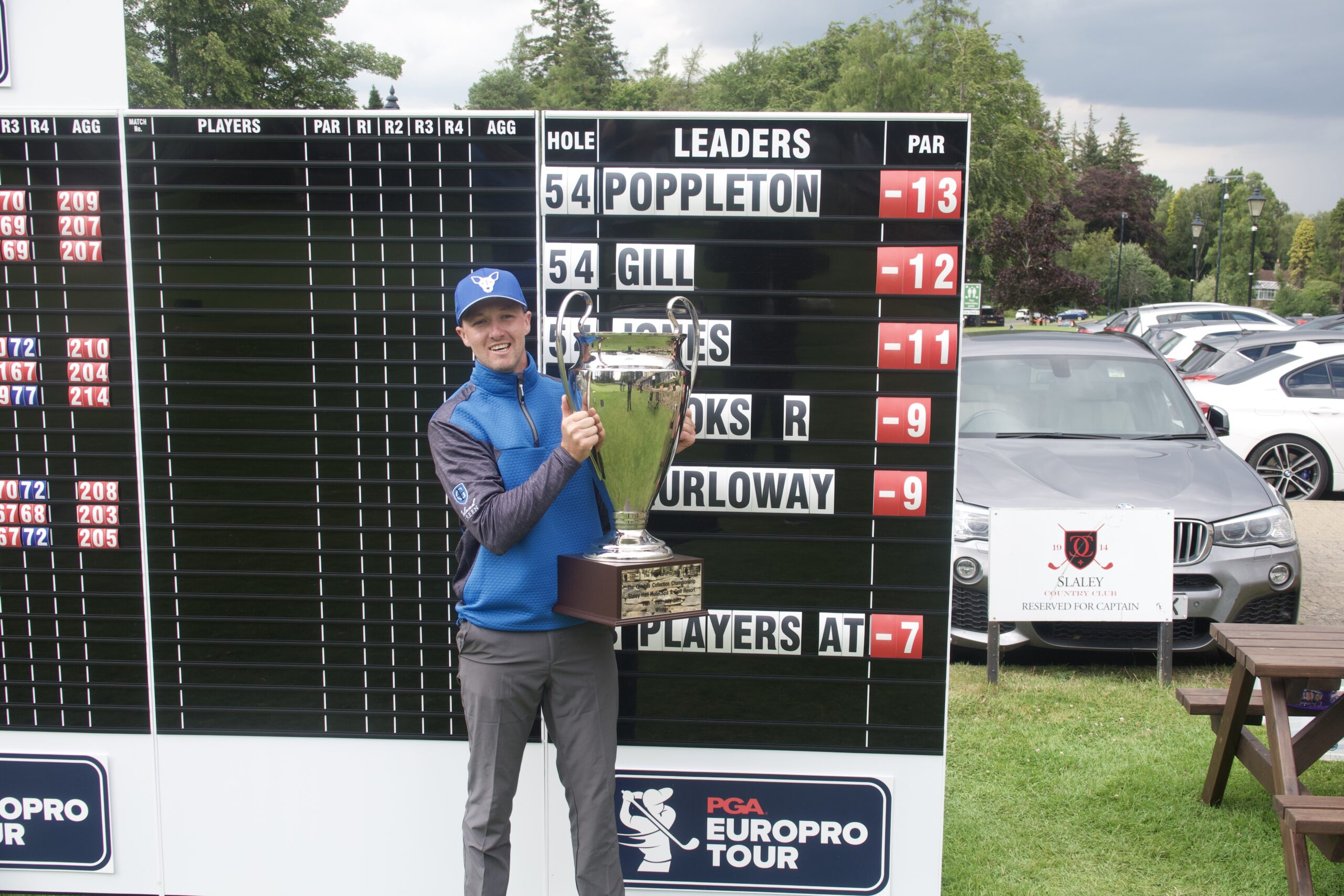 Nicholas Poppleton was crowned champion for the first time on the PGA EuroPro Tour; the Englishman has moved to 10th in the Order of Merit.

The final round of The QHotels Collection Championship produced drama from the moment the leaders departed the first tee.

Benjamin Jones took a two-shot advantage into Friday’s finale, but he quickly saw that lead slashed in half when Nicholas Poppleton made birdie at the opening hole.

Poppleton would subsequently reel off three consecutive birdies to start his round in explosive fashion, but Jones responded with three successive birdies of his own.

That would be the theme of the front nine for these two warriors, as they were matching each other blow for blow.

As the leading trio were on the 7th putting surface, screams and loud applause could be heard from the green up ahead – the par-3 8th.

Bailey Gill recorded his first hole-in-one of the season after a sublime shot, with the subsequent appreciation echoing around the immediate area.

At this stage, Gill was still four shots away from the leader Jones – which highlights just how impressive the leading duo were during the earlier stages of the round.

The eventual champion produced a wonderful bunker shot on the 9th hole that left a good chance for par, but he failed to find the cup – which resulted in a sour way to conclude his opening nine.

Away from that minor blemish, the Englishman showcased his scintillating ability from the very first tee.

Jones, on the other hand, sauntered through the front nine and made the turn at 32 (-4) to restore his overnight two-shot lead as the final group strolled to the 10th tee. Ben Jones held the lead throughout the majority of the tournament

It is said that a golf tournament doesn’t truly start until the final group make the turn, and that is commonly true, but it’s also dependent on the alternative nine that awaits them.

Slaley Hall’s Hunting course is a work of beauty; it features a meticulous design that requires careful thought and pinpoint execution.

Whilst the front offers birdie opportunities frequently and generously, the back nine is determined to snatch them back swiftly and often aggressively too.

Poppleton birdied the 10th hole to retrieve the shot he lost on the 9th, whilst Jones could only par the same hole.

That two-shot lead was chopped in half yet again, but the bulk of the drama would not take place until the 14th hole.

Jones was in trouble off the tee, finding the fairway bunker as Poppleton located the fairway to leave 158 yards into the pin.

Playing slightly uphill and into the wind, the 28-year-old opted for a flighted 7-iron that took one hop and slammed into the cup.

Jones, who led by one on the 14th tee, dropped his first shot of the day at the absolute worst time and his narrow advantage rapidly transitioned into a two-shot deficit.

That hole would start an undesirable run of three consecutive bogeys, as the confident golfer of only one hour prior started to look vulnerable around the greens.

It was far from over however, as Poppleton made double bogey at the 16th to ignite more interest into an already pulsating afternoon.

Evidently – and understandably – upset with his performance on the 16th, a loud thud could be heard as the flag departed his hands and crashed into the ground.

Poppleton quickly regathered himself and parred the 17th hole, but Gill – who featured in the penultimate group of the day – was only one back as he stood on the 18th tee. Bailey Gill applied plenty of pressure during the final day

Unknowingly to the leader, his closest competitor would bogey the final hole and he would have a two-stroke lead as he stared down the treacherous 18th hole.

The closing hole on the Hunting course is an absolute monster; a small ravine that chops the fairway in half forces players to leave the big stick where it belongs – tightly packed into their bag.

Poppleton struck an excellent tee shot and saw his approach land short of the green, he would then leave himself about 6-foot for par.

Jones shaped an implausible approach around an overhanging tree and had roughly 10-foot for a birdie of his own.

If that attempt had dropped, he would have forced a playoff, but a three-putt resulted in Gill taking the runner-up slot and Poppleton being crowned champion for the very first time on this tour.

The turning point of the afternoon was the par-4 14th, where Poppleton’s eagle and Jones’ bogey resulted in a sudden three-shot swing.

“I was 158 yards out and I hit a flighted 7-iron, but I did not know it went in!” an overjoyed Poppleton revealed.

“I thought I was 15-feet away, so I was shocked when I realised it went in.”

Reflecting on his victorious afternoon, the champion had nothing but positive things to say about the player who produced such a valiant fight throughout the bulk of the day.

“I asked a lot of questions of Ben early into the round by making a lot of birdies, and in fairness to him he always answered back,” he noted.

“Testament to Ben’s game and long may it continue, his results have been great this year. It’s a shame he has not won yet, but I’m sure he’ll pick one up along the way.”

When quizzed if this victory alters his seasonal plan, he was quick to admit that it could.

“I had a Challenge Tour invite, but I might stay on the EuroPro as I’m higher in the Order of Merit now – if I can go out and win it would solve all my problems.”

Thanks to Slaley Hall and The QHotels Collection for a wonderful and highly successful week; the Hunting course has received nothing but ultimate praise from our fine batch of talent.

Next up for the PGA EuroPro Tour is a trip to Mannings Heath Wine & Golf Estate, where a new champion will be crowned.

We’ll see you in Sussex for the 10th event of the season. Have a great weekend and get yourself out on a golf course!