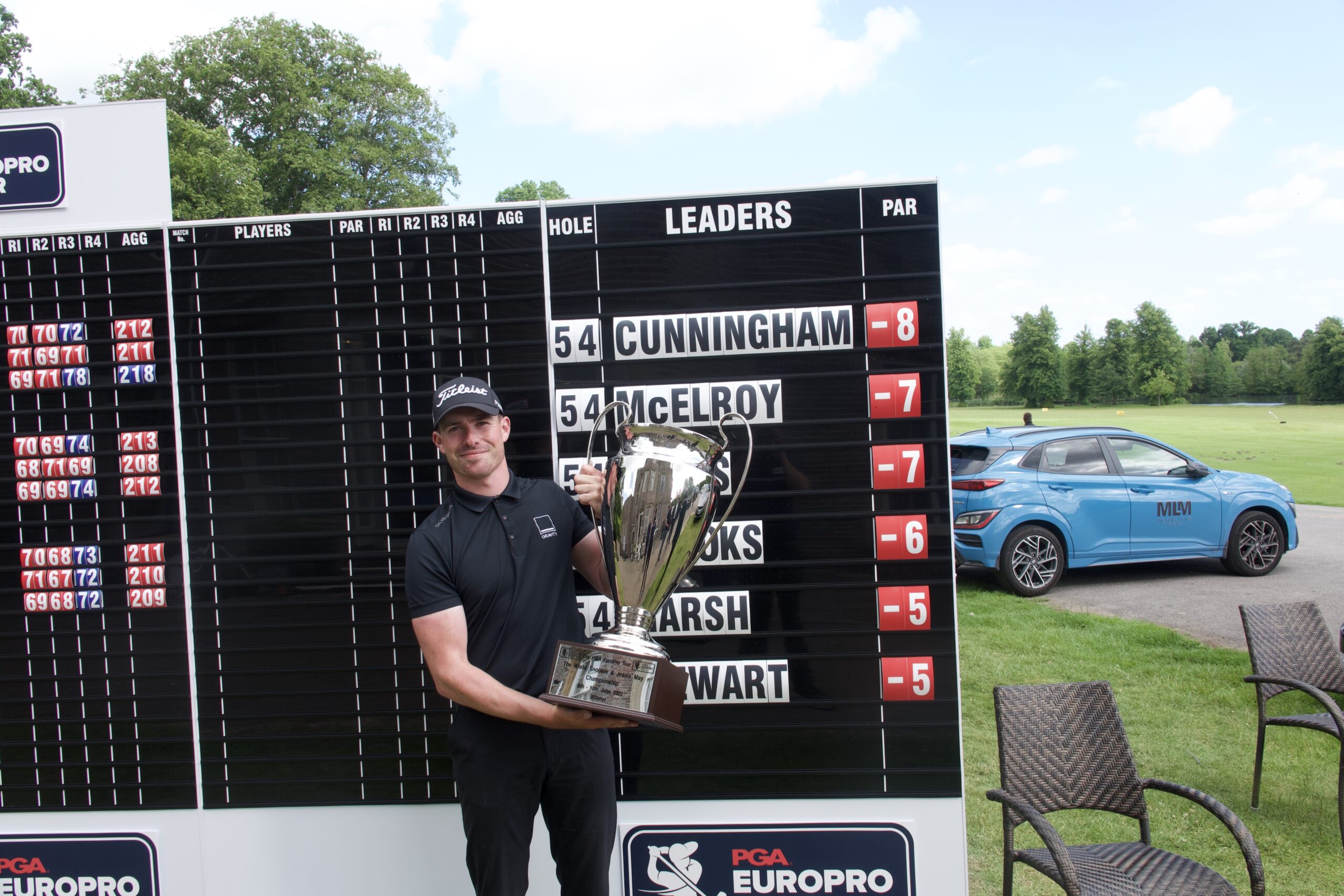 Nick Cunningham recorded his inaugural PGA EuroPro title after a remarkable back nine that saw several players weave in and out of contention.

Friday’s weather was the warmest of the week, with illustrious sunshine dominating the final proceedings.

Benjamin Jones started the round as overnight leader, holding a slender one-stroke advantage over three tied in second.

The final two groups made a slow start to the day with not too much action unfolding during the opening nine holes.

Jones was exceptionally consistent throughout the front, parring every hole and having good looks at birdie – but nothing would drop.

That appeared to be a theme for the entire last group, as no-one recorded a birdie until the 8th hole.

Michael Stewart was the first member of the final trio to taste disappointment, carding bogey on the par-4 5th before dropping another shot on the 8th – although he did respond brilliantly by picking up a shot on the following hole.

Ryan Brooks, the other member of the closing group, double-bogeyed the 5th hole to fall further back from Jones. Despite this, he refused to let that define his day, recording the first birdie of the group on the 8th hole.

Unbeknownst to them, a certain Dermot McElroy was on a rampage, making the turn in 32 (-4) thanks to five birdies and a sole dropped shot.

Cunningham was the first player of the penultimate tee time to apply early pressure on Jones, notching birdie on the par-5 2nd.

A mistake at the 4th resulted in him handing it straight back, but he did have another shining moment at 6 to make the turn in 35 (-1).

In all fairness, away from McElroy’s stupendous opening half, there wasn’t too much to report on – with nerves growing amongst the golfers near the summit. Benjamin Jones teeing from the 1st during the final round

That altered suddenly and dramatically as the final group made the turn however, with Jones picking up his first birdie of the day at the par-5 10th.

Brooks and Stewart failed to replicate his score, but the duo did respond excellently on the following hole with a birdie of their own.

At this stage, Jones was looking steady and ready to close out the tournament, although a bogey on 12 was certainly not part of the plan.

It didn’t faze him though, as back-to-back birdies on the two subsequent holes tilted the title in his direction.

Cunningham was looking for inspiration from somewhere and resultantly found it in the form of the par-5 13th, carding eagle – which was immediately followed by another birdie.

Gaining three shots in just two holes gave him the confidence to put the leader under serious pressure, but no-one could have foreseen what would soon take place on the 15th green.

It’s vitally important to emphasise just how cool and collected Jones had been all day.

Having finished runner-up at the Cubefunder Shootout, he was looking to kick off his season with a runner-up and winning start – having missed last week’s event through featuring on the Asian Tour.

With only four holes to play, he held a two-stroke advantage and looked destined to propel himself up the Order of Merit and secure his inaugural EuroPro Tour victory.

Remarkably, having executed an excellent chip that left six-foot for par, the leader four-putted to card triple-bogey and subsequently swing the door wide open for the chasing pack. The par-3 15th had also been unkind to McElroy, with his par putt lipping out for him to drop a shot and remove himself from the co-lead.

The Northern Irishman would par 16 – which was an incredible effort having missed the fairway to the left, requiring his approach to be struck from the 18th tee – and 17 to set up one final chance of glory.

An astounding approach into the 18th green left just six-foot for birdie, but a late swing to the right narrowly avoided the cup and he would post the clubhouse lead at seven-under.

If there is one element of Jones’ game to really highlight – and believe us, there are many – it is his elite mindset and ability to swiftly overcome disappointment.

For a lot of players, triple-bogeying a hole so late in the round, and subsequently dropping out of the lead, would have been the end of their tournament

However, Jones is not your standard player and he truly rallied until the end.

A par at 16 kept him in the hunt, whilst an outrageously good putt on the 17th resulted in a much-needed birdie and only one shot back as he stood on the 54th and final tee.

Cunningham, who was in the group in front, needed a birdie to separate him from McElroy – and he almost holed out from the fairway. Having pitched his approach slightly past the hole, it hopped back to narrowly miss the cup and leave just three inches for arguably the easiest birdie putt of his career so far.

The Englishman effectively eliminated McElroy from the competition, but Jones wasn’t finished quite yet.

A terrific tee shot left less than 100 yards into the green, with a flag that was certainly gettable.

His wedge shot flew a little further than he would have anticipated, but it established a great chance to tie the lead and force Cunningham to earn his championship via a playoff.

It was only fitting that such an entertaining second half would go down to the very last putt, and it did with Jones agonisingly missing his effort by a matter of inches.

That resulted in Cunningham becoming a PGA EuroPro champion for the first time in his career, where he was quick to praise the support system around him.

“I’ve really struggled the last couple of years, and I have a lot of people to thank for this recent success,” he revealed, thrilled with his first capture on this tour.

“My management company – Gravity – have been very supportive and generally, my golf and performance coaches have really helped me through the winter.

“My girlfriend is so supportive, and I feel sorry for her on a weekly basis – having to put up with me – but I have a good bunch of people around me.”

Cunningham was aware of the type of player he was up against in Jones, and soon realised that nothing but his absolute best would be enough.

“I knew that Ben was leading and he’s a very good player, so I understood it would be tough to catch him.

“When I birdied the final hole, I was mentally preparing for a playoff, so to pick up the win without going through that was welcomed.”

The Englishman – who has played on the EuroPro Tour since 2016 – is a worthy champion of this event and he’ll be looking for further glory – starting with next week.

A visit to Studley Wood Golf Club is up next, where 156 hopefuls will battle it out for the IFX Payments Championship.

We will bring you all the latest developments from that and every tournament throughout the season, and until then, have a fantastic weekend.