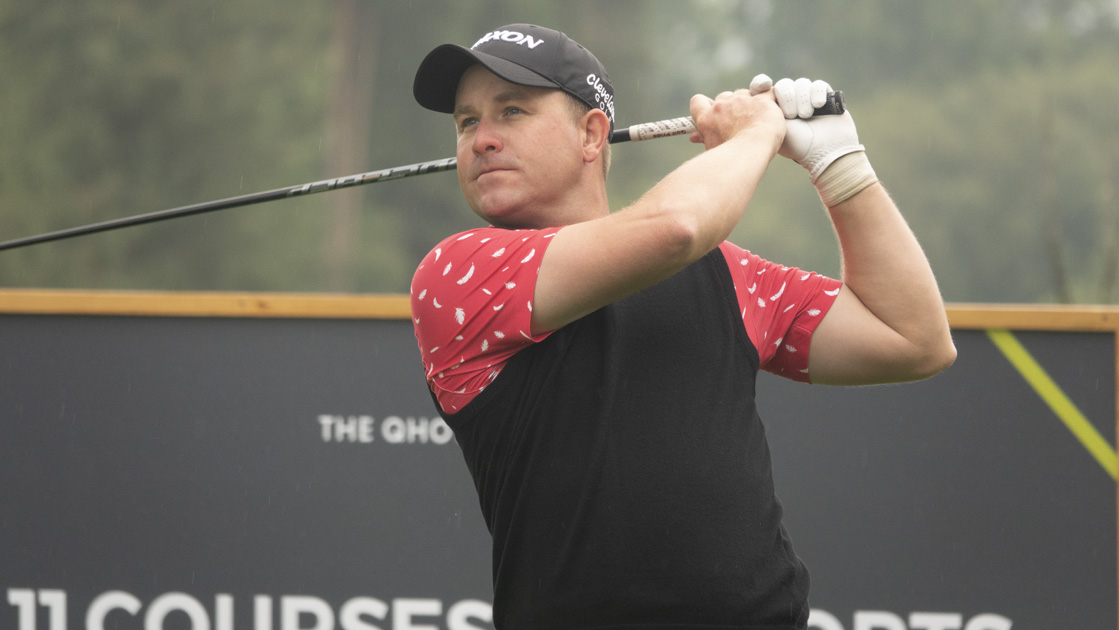 Paul Maddy’s impressive recent form has continued in Scotland, as the Englishman posted 64 (-7) to lead an ultra-competitive field.

Paul Maddy will be delighted with the start he has made at Spey Valley, accumulating eight birdies and dropping only one shot during his first round.

Maddy made the long journey up to Scotland following three consecutive top 10s, and he looks on track to record his maiden win of the season.

Billy McKenzie and Ben Hutchinson are only one shot back however, following a pair of dazzling 65s.

McKenzie held the lead for a large chunk of the day, but Maddy’s brilliance ensured he would be dethroned before the second round begins.

Hutchinson, on the other hand, was simply marvellous – carding two eagles at the par-5 13th and the par-4 9th!

Chris Hanson returns to the fold for the first time since Slaley Hall, and the Englishman has marked his arrival with a superb 66 (-5).

Alongside him are Jack Hawksby, Sean Towndrow, Ryan Brooks and Michael Stewart – with the latter continuing his fine season-long form.

Current leader in the Order of Merit, James Allan, shot a round of 73 (+2) today, meaning he will have work to do if he is to make the cut.

Regardless of his performance, Allan is sitting pretty at the top of the seasonal leaderboard and he will undoubtedly play on the Challenge Tour next year.

Dermot McElroy is nicely positioned for a charge during the second round, and the Northern Irishman will be looking to tie up his Challenge Tour card this week.

Brandon Robinson-Thompson may not have had his best game today, but the supremely talented 30-year-old still managed to shoot under par.

A round score of 70 (-1) has issued him a platform to apply pressure on those above him – and Robinson-Thompson is someone who thrives chasing.

Ryan Brooks has returned to form with an almighty bang, carding 66 (-5) to set-up a grand opportunity for a second seasonal title.

Brooks had struggled of late, but it looks as though the Tamworth-based golfer has put his previous troubles well behind him.

Jack Davidson, who occupies the dangerous 5th position in the OoM, mirrored Robinson-Thompson’s score of 70.

The Welshman, who was crowned champion on home soil at Machynys Peninsula Golf Club, will know that a few more positive results will be needed before he can relax.

Pavan Sagoo is on the wrong side of par, but a score of 72 (+1) is far from disastrous.

Sagoo has exhibited his ability to go extraordinarily low, and he’ll need some of that magic if he is to trouble the current leaders.

Paul Maddy – who is the highest ranked player without a win this campaign – will be ecstatic that he has managed to earn the 18-hole lead.

Maddy has been in stupendous form throughout the past month, and he is not showing any signs of slowing down.

Sam Broadhurst, the most recent champion, was level for the day, which is currently just within the cut line.

The Englishman won’t be too bothered however, as he has another chance of producing the score he is capable of tomorrow.

The opening day was delayed by 30 minutes on Wednesday morning, and the final group will need to complete their opening rounds tomorrow morning – currently thru 16.

The cut is projected at level par, with 64 players at that score or better. However, if conditions emulate todays, then we can expect it to lower.

Make sure you are glued to our social pages if you want frequent updates of the Spey Valley Championship.