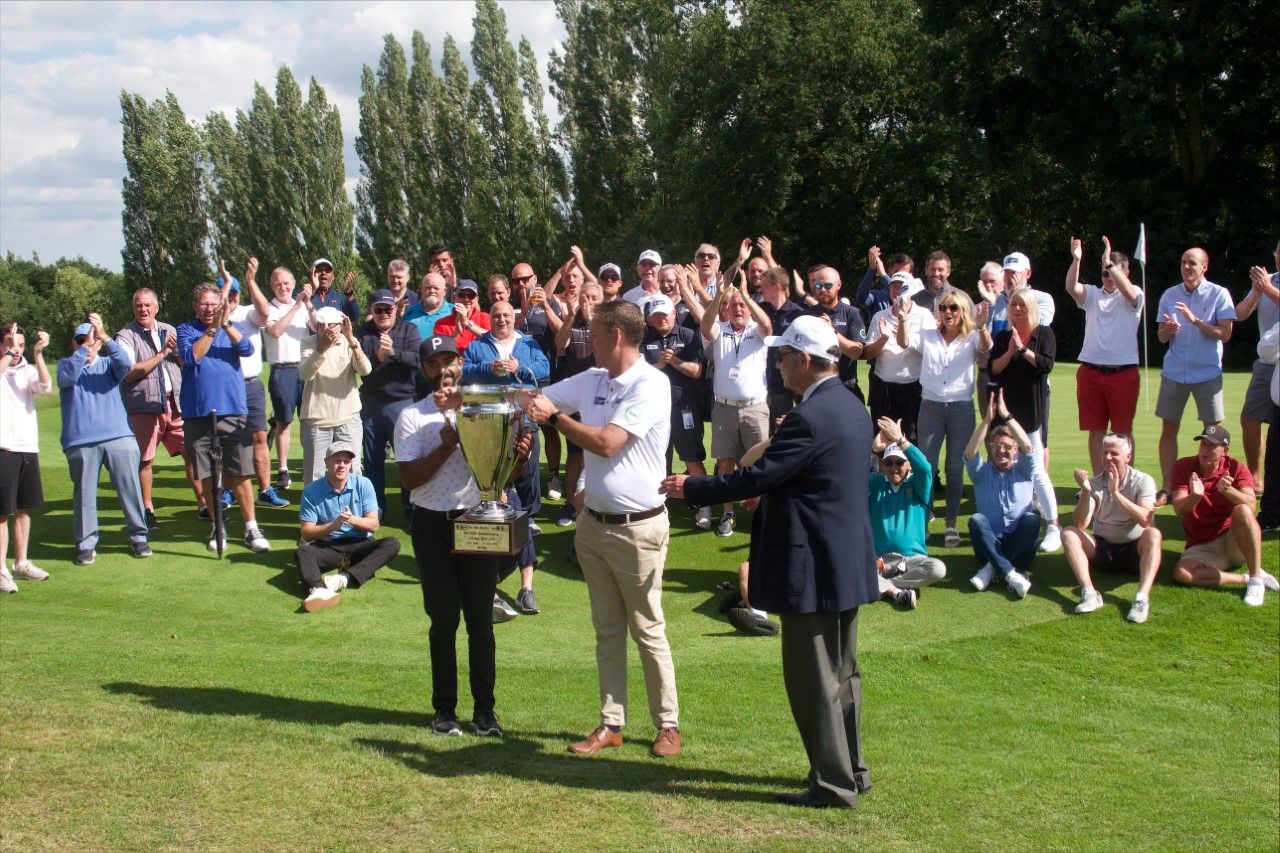 Pavan Sagoo was victorious on the PGA EuroPro Tour for the first time; the Englishman has moved to second in the Order of Merit, jumping 22 places.

The final day of a PGA EuroPro Tour competition is always highly competitive and ultra-entertaining, but today may go down as the most pulsating of the season to date.

As the leaders departed the opening tee, there were plenty in contention. Abridge Golf & Country Club prepared an astounding and challenging course – although they weren’t expecting Pavan Sagoo to produce the performance of his life.

His week was remarkable to say the least, having hit his very first shot of the tournament out of bounds, which required a reluctant reload.

Sagoo would open his tournament with a double-bogey and unbelievably, he was four-over following the first 11 holes of the event.

Final Open Qualifying took place on Tuesday and he, alongside a selection of others, were tasked with playing 36 holes in brutal and intimidating conditions.

After a long battle against the elements – and a troubling golf course – he was faced with a five-hour drive down to Essex to compete on the EuroPro Tour.

Following those opening 11 holes on Wednesday, Sagoo contemplated if he should withdraw on the grounds of exhaustion.

Believe us, each and every golfer who tackled Final Open Qualifying had been bruised and battered – including those who qualified, like our very own Ronan Mullarney.

Thankfully, Sagoo continued the fight and decided to reset. After all, there were still 43 holes to recover his stuttering start.

He played those final 43 holes at 22-under, averaging a birdie better than every other hole…

Sagoo did not start the day in the lead, however. That belonged to Jack Davidson.

The Welshman actually retained his advantage heading into the back nine and if we’re being honest, a multi-day golf tournament doesn’t truly begin until the back nine, does it?

When you have a 36-hole leaderboard as stacked as this one was, a winner can emerge from absolutely anywhere.

Davidson enjoyed a slender lead heading down the 10th fairway, but Sagoo, Daniel O’Loughlin and Brandon Robinson-Thompson had the leader in their sights. Brandon Robinson-Thompson on the 10th tee – which he birdied

Sagoo started his latter half in excellent fashion, birdieing the 10th and 11th before two more would be secured at the 13th and 14th.

The overnight leader, Davidson, experienced a frustrating back nine, which featured two bogeys and just the one birdie to post an even par final round.

He was selected for the Walker Cup team prior to turning professional however, so get used to seeing this name near the top of leaderboards this year.

Joe Brooks is another figure you may have become familiar with recently, and he too enjoyed a stellar day on home soil.

The Essex-based golfer carded three birdies in only four holes after making the turn, although his scoring rate would dry up before a bogey at 17 removed him in contention.

Whilst it looked like many could win, it ultimately came down to just two golfers: Sagoo and Robinson-Thompson.

The latter enjoyed yet another fine day and he came so close to elevating that into a glorious afternoon.

An eagle at the par-5 13th launched him into the co-lead with Sagoo, before a birdie at the following hole momentarily placed him into the solo lead.

When we say ‘momentarily’ we mean minutes, as Sagoo birdied the 13th to co-lead, before another at the 14th pushed him into solo first.

The turning point took place during the closing stretch. Robinson-Thompson saw his long-range birdie attempt lip out and he missed the return putt to drop a shot.

Unbeknownst to Robinson-Thompson, Sagoo was forced to take a drop after finding the hazard from the 16th tee.

He was faced with a tricky par putt from range and managed to produce arguably the putt of his life to keep his advantage intact.

For his competitor, another bogey at the 17th hole effectively removed him from contention but what a fantastic performance from Robinson-Thompson.

He is another name that will be competing a lot this season, so there’s another one to remember going forward! Sagoo was unaware of his lead on the 18th tee, which he quite enjoyed as he did not want it to impact what kind of shot to execute down the last.

“I kind of wanted to find out my standing but at the same time, I did not want that to influence my tee shot decision,” he tells us, still beaming from his incredible performance.

“So, I hit what I felt was right – and I wanted to green it!” Considering he was unaware of his advantage, that final tee shot should be framed and hung at the Louvre.

Although the par-4 18th is a nice closing hole for the players – playing at an average of 3.90 this week – he was still leading a very competitive tournament with not just money, but prestige on the line.

Sagoo’s drive was met with cheers from the many patrons who had followed him around so loyally throughout the entire round.

His tee shot finished a matter of yards short of the green and he kept his composure to execute an up-and-down for yet another birdie on his 54th and final hole.

When quizzed about Thursday’s 62, he revealed it wasn’t as flawless as you might expect.

“I missed a few putts during that round and had some lip outs – I also parred a par-5,” he notes.

“I think it’s key to stick to your game plan around this course; the greens aren’t huge so if you hit it to the middle each time, you’re going to have a look. Of course, I putted well – but I could have definitely holed more putts.”

Quite frankly, it’s unfathomable that rounds of 62 (-10) and 63 (-9) could have been better, but it’s the truth – there’s something about this exceptionally talented golfer.

Following his maiden PGA EuroPro Tour title, he was asked if today’s victory would change his season-long plan, which he’s confident it won’t.

“You know, I tend to approach all tournaments the same and I’m not going to alter that, but it’s a great learning experience of how I feel under pressure.

“We had a large crowd basically the entire round but it won’t change anything going forward; I think I’ll be better prepared if I’m in this position again.” Pavan Sagoo was ecstatic with his maiden tour title

If we consider the magnitude of his achievements this week – not only the victory, but the course record too – it was important we asked him how he felt about Abridge Golf & Country Club.

“Unreal. The fairways were like carpets and the greenkeeping team have done an amazing job. Everyone here has been great!”

Remarkably, due to the tussle that was Final Open Qualifying, Sagoo had no time for a practice round and he hadn’t experienced this course before – he turned up completely blind for his opening round.

It only took him 18 holes to understand where the optimal placements were; the following round would result in the course record.

The loop after that would almost tie the course record that he set the day before.

Pavan Sagoo is one special golfer and do you know what the scariest thing is? He’s only getting started.

What The PDC Golf Championship Unearthed