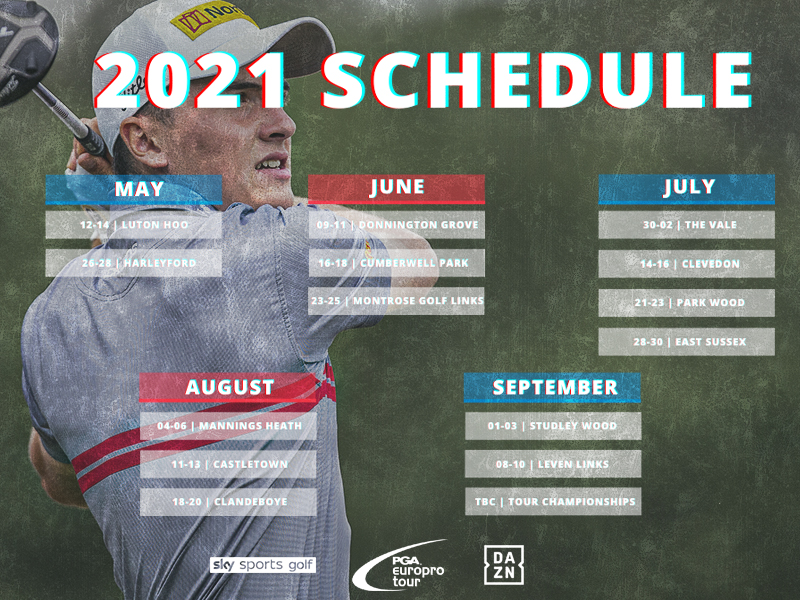 The PGA EuroPro Tour 2021 schedule has been announced as it covers the length and breadth of the UK and Ireland over the main season with  UK’s biggest golf tour going bigger and better with an increased prize fund of over £900,000 (€1-million).

The first place for an event has now increased to £12,500 per tournament with the winner at Tour Championships now receiving £25,000. To add to this, membership and entry fees have been frozen with the opportunity to take on former European Tour venues along with the drama people come to expect of the Tour.

Luton Hoo, Golf & Spa will be the season curtain-raiser in 2020 with a length of 7,107 yards and a mixture of both challenging inland links holes and parkland across the beautiful estate.

It’s been a firm favourite in years gone by with the Tour most recently visiting in 2017 where Sam Connor won by seven shots on twenty under par after three days and the Challenge Tour visiting in 2018.

Home of Tour alumni Tyrrell Hatton, Harleyford Golf Club has proven to be a stern test and will form part of the schedule for the third year.

The Donald Steel designed course features beautiful James Doran-Webb’s driftwood sculptures wherever you look with the staple feature being the Harleyford stag sitting proudly behind the first tee.

Donnington Grove Golf Club is next after a week off where last year’s order of merit winner Mikael Lundberg got his first victory of the season.

Spanning over 7,108 yards overlooked by Donnington Grove castle with views across Newbury and Oxfordshire it’ll be an exciting prospect.

Cumberwell Park is a course that players always look forward to going back to with a first-class short game area and 45 holes across the courses that take in everything Wiltshire has to offer with a blend of rolling countryside, lakes, streams, natural copse, and woodland.

The fifth-oldest golf course in the world returns to the schedule after a break with the iconic links making it one of the toughest tests in Scotland.

Back in 2013, it was home to one of the Tour’s most iconic moments when John E. Morgan fired in a hole in one on the 235-yard par three.

The Vale Golf & Country Club in Evesham, Worcestershire is one of the finest in the county and it’s set off by panoramic views of the Malvern Hills as it winds around 7,154 yards on the Par 74 International Course.

A new venue for the Tour and there’s great hope for some summer heat as we head towards the make or break weeks.

The humble roots of John E. Morgan sprouted from Clevedon Golf Club and that’s where the Tour will head to in the middle of July.

After Clevedon, the Tour moves over the halfway stage at The Parkwood Golf Club in Kent for three rounds in what is hopefully some of the best weather of the year.

East Sussex National is regarded as one of the finest courses in Sussex with two Championship courses and first-class facilities on site with the East Course in focus for the Tour. Billy Hemstock held off Dave Coupland in a playoff to win on the Tour’s last visit in 2018.

The championship course has been influenced by Harry Colt, the great golf course architect responsible for beautiful layouts across the South of England. Colt’s input makes the Waterfall a challenging but exciting course that can test even the best of players.

It’s another Tour first as we head to the Isle of Man at the crunch end of the season with Castletown Golf Links surrounded by the sea on three sides for the ultimate golfing experience on a course designed by the great Old Tom Morris.

Grey Seals, Basking Sharks, and Risso Dolphins have all been spotted in the waters of the Langness Peninsula around Castletown.

Home of Tour graduate Jonathan Caldwell, Clandeboye is a former European Tour host and sweeps across Northern Ireland’s undulating countryside and the North Down.

It’ll prove to be a huge challenge with gorse, bracken, and strategically placed trees across every hole, demanding extreme accuracy and punishing the slightest error.

Home to final stage Qualifying School, Studley Wood Golf Club has played host to some of the best golf witnessed on the Tour from Scott Fallon’s course record in 2018 of 64 to guide him to victory and Will Enefer’s stunning new course record of 63 last year.

Leven Links is our second visit to Scotland on the schedule and the last event of the regular season. It’s another historic golf course spanning over 6,506 yards. The course encompasses everything you’d expect from a links course and could prove to be an explosive finish to the 2020 season.

To be revealed at a later date