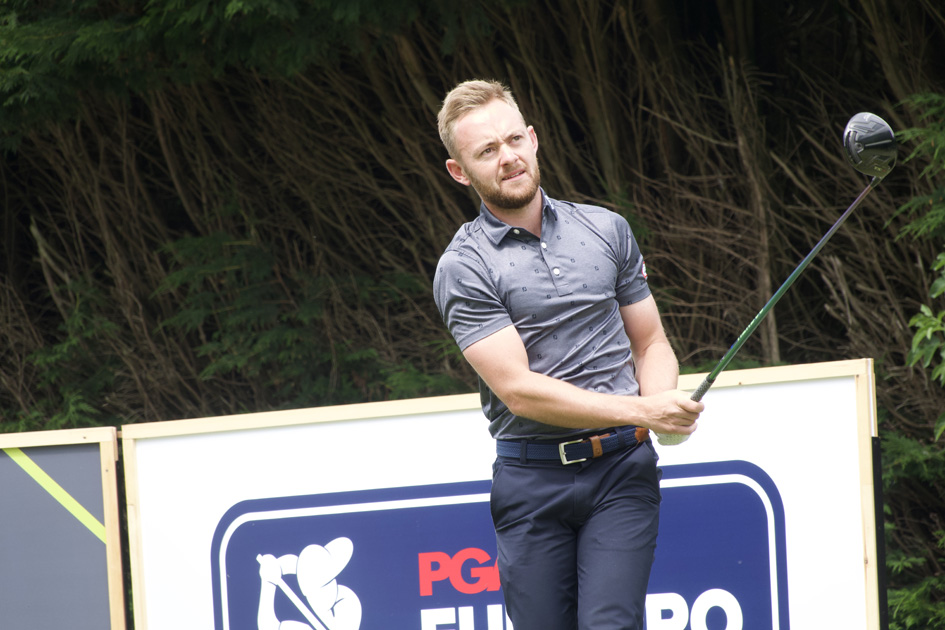 Studley Wood Golf Club has welcomed the EuroPro players with open arms this week, as 99 golfers broke par; the cut line is currently projected at three-under.

The lead is currently being shared by three – two of whom featured in the morning wave – and the trio have enjoyed a splendid day.

Taylor Carter, who is yet to miss a cut this season, gave himself the ultimate birthday present by shooting 65 (-8).

He’s not alone however, as Sean Lawrie matched the Englishman with the same score – but both men enjoyed blemish-free mornings.

Carter, who started his tournament from the 10th tee, opened up his birdie account immediately, before striking again a few holes later.

The back nine at Studley Wood features three par-fives, which naturally holds the potential for lower scores.

Carter played the collective par-fives at four-under and looked set to tear up his second nine in similar fashion.

He remained steady during the first few holes, but an explosive conclusion culminated in three consecutive birdies to draw his day to a close.

Whilst there are many opportunities for scoring around this Oxford-based layout, there are still moments that require careful negotiating.

Therefore, it’s impressive to plot your way around successfully without dropping a sole shot – something Lawrie did effortlessly well.

He too started on the back nine, but the peak in performances tell two drastically different stories.

The Scotsman was evidently biding his time, as he catapulted into a spell of fine form to finish, birdieing four of the closing six holes to match Carter’s score. Billy Hemstock was the lowest member of the afternoon wave and he actually featured in the very last group of the day, teeing off at 14:24.

Hemstock missed the cut at Donnington last week, so he’ll be thrilled to know that’s he earned a platform to launch an immediate response.

He’s scheduled to start his second round at 09:24 tomorrow, and he’ll be issued a golden opportunity to apply pressure to the overnight leaders.

The Englishman came in at 31 (-6) to conclude Friday’s action in the most dramatic of finishes. He is yet to position within the top 10 this season, but does champion-status loom invitingly?

Although only three of the 156-strong field managed to squeeze out 65s, they only hold a slender, one-stroke advantage over three tied in second.

Joshua McMahon has yet again proven that he can go unfathomably low, producing a 66 that included one eagle and a bogey.

He shot the lowest round of the week with 66 at Donnington Grove previously, and he’s happy to prove that he can turn it on when needed.

David Wicks is also finely poised as we head into the business end of the tournament, meandering his way through with a 67 that included an eagle on the 18th (his 9th).

The Englishman actually eagled both 18 and 9, which will undoubtedly inspire confidence when gazing down the fairways in future rounds.

There are currently 11 within two strokes of the lead and there are some familiar faces amongst them.

Ryan Brooks, who experienced his best EuroPro Tour finish last week in Newbury, is bunched near the top yet again.

In eerily similar fashion to last Friday’s final round, the putter was cold for Brooks through the opening third, but it warmed up rapidly with birdies on 7 and 9.

It’s remarkable that a score of 70 (-3) leaves you on the cut line, which is why it was vitally important for Brooks to have pushed on if he wanted to contend again this week.

A birdie on the 10th was met with another of the 12th, before two further shots at the 15th and 18th were also picked up.

During his back nine, Brooks never played more than two holes in succession without a birdie.

James Newton is a name that has been showing a bit of promise in recent weeks, best highlighted by finishing T31 during The Ignis Management Championship. The Englishman opened that tournament with a four-under 66 – which included five consecutive birdies to finish his first round.

He’s managed to recapture that spell of magic, as a six-under 67 puts him in a great position heading into later rounds.

Brooks hasn’t managed to find the rhythm that he’s demonstrated so frequently in the past, but this could be the round that ignites his season.

A fantastic final round 67 spiralled him up the leaderboard to an unlikely finish of T12 during last week’s World Snooker & Jessie May Championship.

He’s clearly taken that confidence to Oxford with him, as he has now recorded back-to-back rounds of 67 in EuroPro competition play.

White will be delighted with his performance today, and a bogey at the 12th meant it could have been an even brighter day.

That would have been his third hole, so we must applaud his ability to quickly recover from minor disappointment.

Mullarney is the only Irishman inside the top 10, and he’ll be excited to gnaw into the leaders’ advantage when he gets his second-round underway tomorrow morning.

He, alongside Hemstock and Crumplin, were the only members of the afternoon wave to feature near the top.

Joe Dean (+1) and Dermot McElroy (+4) are two names who you wouldn’t associate with poor rounds.

The duo have been in consistently good form this season, but both are yet to taste victory this campaign.

Considering the projected cut currently sits at three-under, we can safely expect this week to produce the lowest cut of the season.

Nothing but golden rays and insufferable sunshine awaits the players tomorrow – can 65 be bettered?