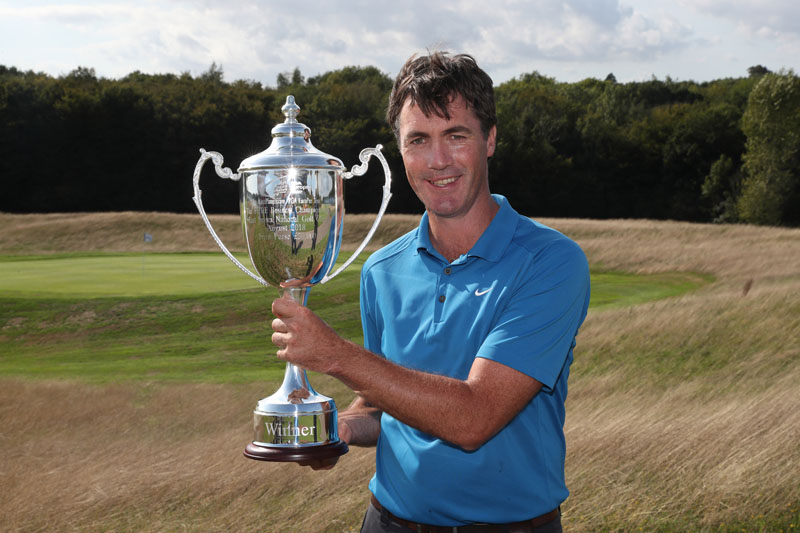 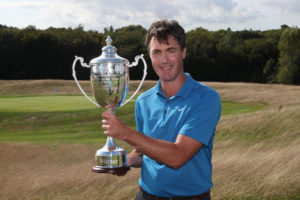 Tim Rice carded the lowest round of the final day to clinch his first title of the season at the HotelPlanner.com PGA EuroPro Tour’s “FORE” Business Championship at East Sussex National Golf Resort & Spa.

Rice (Limerick Golf Club) started the day five shots back behind leader Matt Cort (Beedles Lake Golf Club) and needed to string some birdies together in order to climb the board and apply some pressure on those ahead. Going out in 34 the Irishman was in a decent position but was still four shots behind Cort who still lead the way at the turn.

However, a blemish-free back nine with four birdies including a superb 12 feet putt from the fringe on the last put Rice in the clubhouse with an overall score of eleven-under par. Cort’s back nine was a completely different story, three bogeys over his final four holes pulled the 2016 Order of Merit Winner back to eight-under par and tied for fourth.

Rice, reflecting on his first EuroPro Tour title of the season, said: “I’m surprised that I won, I really didn’t expect it and it will take a little while to settle in. It’s a real bonus.

“It’s always easier coming from behind, you’re in a position where you’re allowed to just go for it out there and take the risks that the guys out in front can’t necessarily make.

“It wasn’t until the 15ththat I started to think that I could win, I holed a birdie putt and realised that if I could hold on I would be in with a great chance. I could see I was level with Matt at the time and heading down the 18thI just went for it with my approach shot, I wouldn’t normally have gone at the flag but that was the difference between me winning and not today.”

The 13thevent of the season proved to be one for the underdogs, with four of the top five all starting outside the top 60 list in the Race To Desert Springs, only Chris Gane (Lefthanded Golf at Silvermere) could really capitalise on that with a third place finish. Dave Coupland also collected a top ten finish to extend the gap at the top of the leaderboard with just two regular events left in the season.

The win sees Rice leap up 59 spots to 13thin the Race To Desert Springs, and Chris Gane climbs up seven spots to regain a spot in the top five.

Highlights of the “FORE” Business Championship will air on Sky Sports Golf on Tuesday, 28thAugust. The PGA EuroPro Tour continues on Wednesday, 29thAugust with The Prem Group Irish Masters at Tulfarris Hotel and Golf, Wicklow.