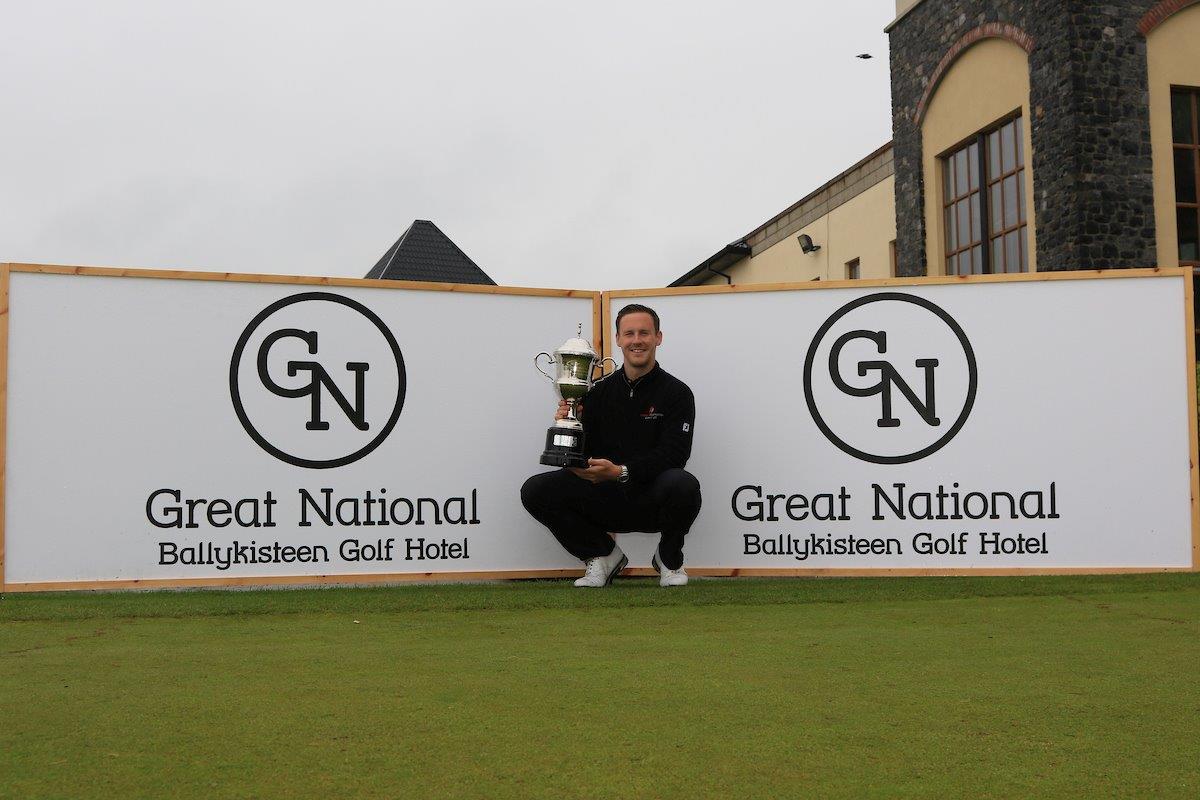 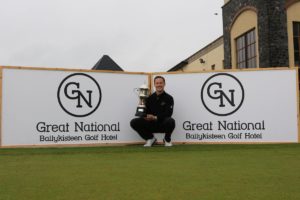 Sam Robertshawe won his first HotelPlanner.com PGA EuroPro Tour trophy shooting a final-round 65 to come through the field and win the Great National Hotels Irish Masters with a score of -13 at Great National Ballykisteen Golf Hotel.

On an afternoon when the lead changed hands countless times, Robertshawe (Puttenham Construction/SW GC; 69, 69, 65) finished his last 18 almost two hours before the final group. His final-round 65 equalled the course-record -7 set by James Ruth earlier in the week and in the end his -13 proved enough to fend off his nearest challenger Dermot McElroy.

“I have had a few close calls in the past and it is such an amazing feeling to finally get it done,” said Robertshawe, who wins £10,000, a brand new Motocaddy S3 PRO electric trolley with lithium battery, Bushnell Pro X2 Range Finder and Bolle sunglasses.

“It is an emotional win. My dad has been very unwell over the last four or five months – he would normally be here. I started my PGA at the end of last year as a back-up plan so to come here and have the hard work pay off is very emotional and I am overwhelmed.

“From start to finish I have been comfortable with the way I was playing and warming it up. I knew there would always be chances out there on the golf course and I drove it well, put a lot of shots close and when I was within five or six feet I was holing the putts.

“When I finished my round I wasn’t sure if it was enough. There were over 20 players within five shots of my score and it was tough to know if it was enough, especially with a lot of rain coming in. I just had to wait and see what happened.”

It was an agonising afternoon for McElory (Ballymena Golf Club; 70, 67, 67), however. Having finished second at Close House in the season opener two weeks ago, he opened his final round at Great National Ballykisteen Golf Hotel with five consecutive birdies to force himself into contention.

By the time he reached the 16th he lead on -14, but he pulled his approach on that hole into the water and held a tricky putt to escape with bogey. However, a three-putt at the last meant his hopes of forcing a play-off were over.

For a second tournament running McElroy had to settle for runner-up, and he shared second on -12 with Sean Lawrie (Paul Lawrie Golf Centre; 68, 70, 66) who had been playing with Robertshawe during the final round.

Highlights of the Great National Hotels Irish Masters will air on Sky Sports on Tuesday, May 23.

The HotelPlanner.com PGA EuroPro Tour continues with the IFX Championship at Frilford Heath Golf Club in Oxford next Wednesday May 17 to Friday, May 19.