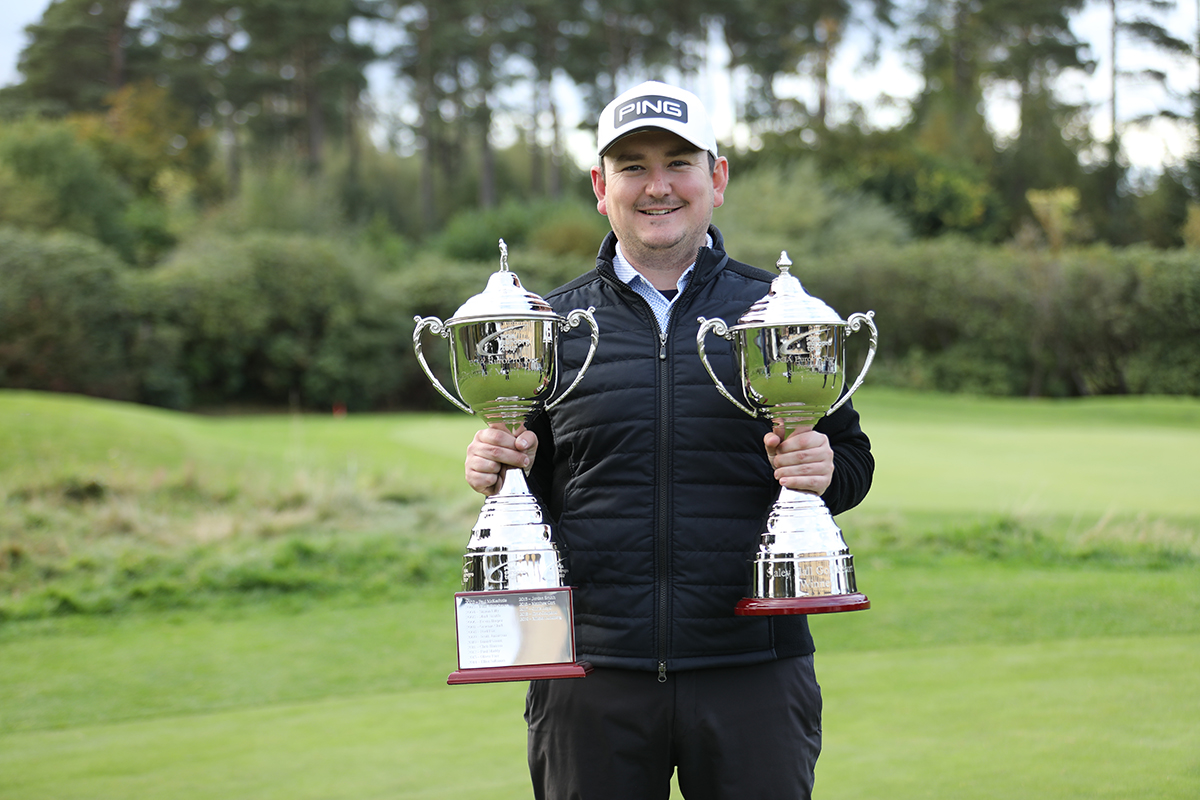 Jamie Rutherford has won the 2021 Matchroom Tour Championship at Slaley Hall in a dramatic final day of the season that saw him also seal first place on the order of merit.

Rutherford went into the day two off the lead and ninth on the order of merit and knew it’d take a gutsy performance to seal a place on next season’s Challenge Tour.

Rutherford went out for 35 but hit the turn with four straight birdies from 10-13 to move to -9 one clear of Jack McDonald and Calum Fyfe. He made a huge par save on 17 from a horrible lie before a bogey on 18 left him with a wait and McDonald eyeing a potential win or playoff.

When it came down to it, McDonald’s approach into the tight 18th was short of the green leaving himself needing to chip in for the win or a par to make the playoff. McDonald made bogey and it was Rutherford who took home the win and a Challenge Tour card.

The day had ebbed and flowed in so many directions as it unfolded with the rain attempting to have a say halfway through before it settled with the Hunting Course in immaculate condition. It seemed to be anyone’s game for so much of it.

Consistency was the theme of the season as Mitch Waite took second on the order of merit after not missing a cut all season and winning twice. He was closely followed by Fyfe who won at Castletown in the last regular event of the season.

Dan Brown (Romanby Golf Club) sealed his card in fourth overall after a dramatic final hole where he laid up before making a clutch par putt to take a tie for second at Slaley Hall and his spot in the top five.

John Parry has been there or thereabouts all season and took fifth on the order of merit rewarded for a solid year after winning at Cumberwell Park.

Overnight leader William Harrold did well to take fifth on his own, coming after at one point finding himself over or and staring down the barrel.

Dermot McElroy started the week inside the order of merit top five but found himself out of the picture going into the final day where he produced one of the rounds of the week for seven under including a hole in one at five.

It’s not just the top five who will gain Challenge Tour status this season though, the next five players on the order of merit to a limit of 15th place, not otherwise exempt, from the final 2021 Order of Merit will get category 20 status.

Those five were Will Enefer who missed out cruelly due to Brown’s final hole score. McElroy, Joe Dean, Tom Sloman, and McDonald. Sloman taking the 2021 Rookie of the Year award for his showings of 12 cuts from 14 including 12 top 25s.

A special mention must go to Grahame and Heather Craddock who have looked after the Tour’s scoring and logistics for over 14 years, the duo have been a huge part of the Tour and we wish them well in their retirement and hope to see them in a Pro-Am sometime soon. We speak for everyone in saying thank you for your hard work and dedication over the years.

Highlights from Tour Championship 2021 will air on Sky Sports Golf on November 2 at 20:00 and networks worldwide from the same date.