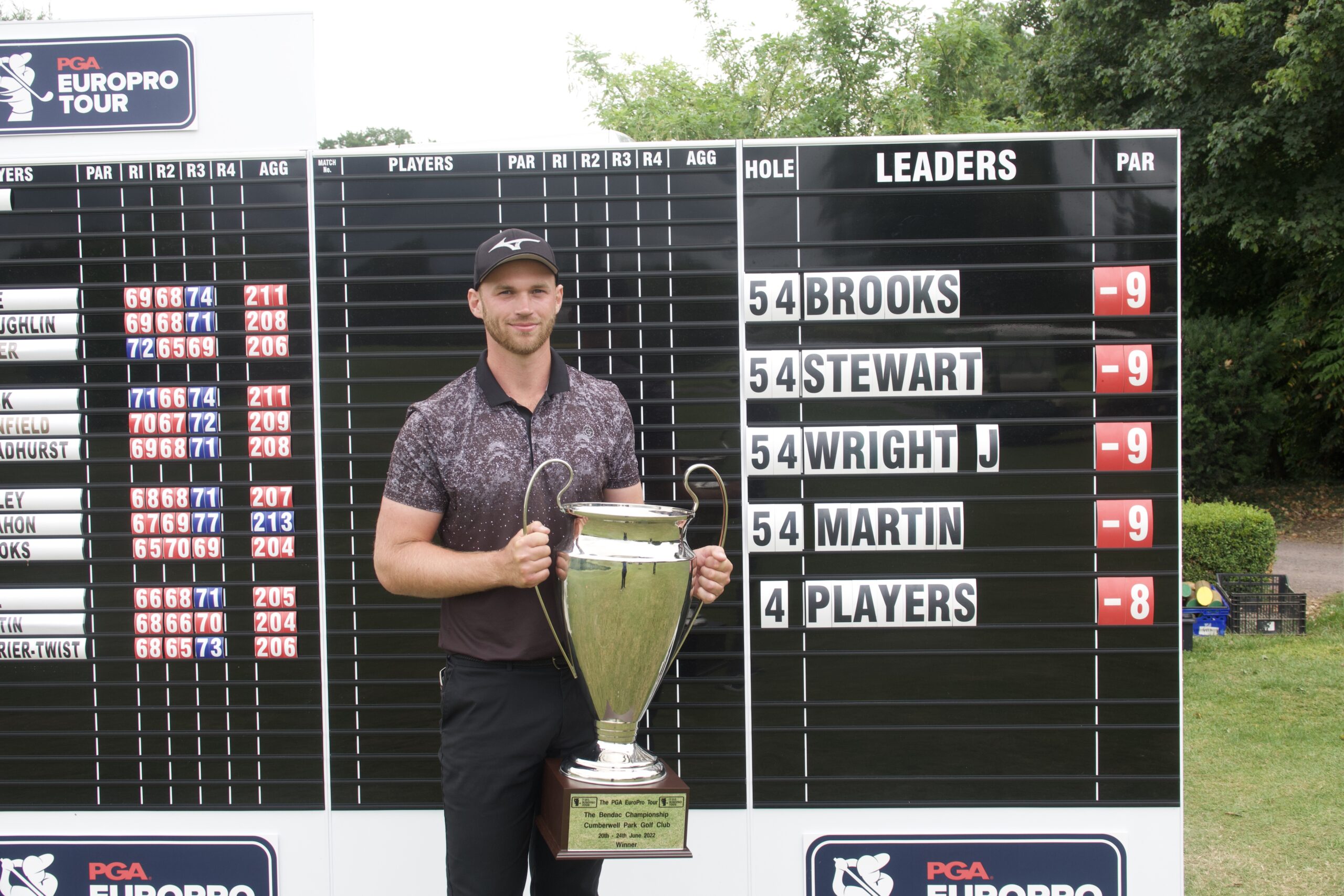 Ryan Brooks scooped his maiden PGA EuroPro Tour title; the Englishman has dethroned James Allan in the Order of Merit.

Following the conclusion of The World Snooker & Jessie May Championship, a deflated Ryan Brooks headed in the direction of Nick Cunningham to congratulate him on his victory.

Brooks fell two shots short of the champion’s eight-under score, but the experience of being in the mix provided an insight into a winner’s life.

Fast forward only two weeks, and Brooks would be in contention again – this time culminating in infinite delight.

He failed to exhibit any consistent rhythm at Donnington Grove, with an early double-bogey epitomising the frustration he felt throughout.

Today’s front nine yielded two birdies and no blemishes on the card, enabling him to make the turn in 33 (-2) and ready himself for a back nine battle.

Michael Farrier-Twist, the overnight leader, finished his opening half in 34 (-1), holding the outright lead at -10.

By this time, Jeff Wright had finished his final round and shot a highly impressive 64 – which was the lowest round of the week.

The Scotsman had teed off nearly three hours before the leaders, which required an extensive spell of sitting and hoping in the clubhouse.

It wouldn’t be too much longer before he was joined by fellow countryman, Michael Stewart.

Stewart had shot a round of 66 to match Wright’s score, with four players agonisingly missing out with tournament scores of eight-under. With both Wright and Stewart in the clubhouse at nine-under, it was looking likely that those scores would not be enough – but the duo were required to play the waiting game nonetheless.

Back to the course and Farrier-Twist’s reign at the summit of the leaderboard was in danger, failing to locate his first two drives.

Remarkably, he had to play a second provisional ball and subsequently made double-bogey – his one-stroke lead had generated into a one-shot deficit.

This opened the door for Max Martin, who only bogeyed one hole throughout the entire day.

It was the par-4 15th which cruelly stole his advantage, playing at an average of 4.62 this week – comfortably the hardest of the layout.

Martin was a matter of holes away from being crowned a PGA EuroPro Tour champion, but sadly golf doesn’t care too much for emotion.

He wasn’t, however, the only player to drop a shot at the 15th, with Brooks failing to get up-and-down from the sand.

Both players would par 16 & 17 before being tasked with one final test of their game.

Brooks, needing a birdie to tie the clubhouse lead and not knowing how Martin was faring in the group behind, was in an excellent position off the tee.

His approach was finessed to six-foot, and he happily rolled the putt into the middle of the cup – a four-way playoff looked likely.

The only person who remained in control of his own destiny was Martin, who crept into the left-side rough from the tee.

An outrageously good approach left a good look for birdie, but his putt rolled painfully by and the three leaders in the clubhouse rushed to the range and putting green.

This was the first playoff of the 2022 PGA EuroPro Tour season – and it certainly didn’t disappoint.

The 18th acted as the opening hole for the playoff, which resulted in two players surrendering themselves from contention.

Firstly, Jeff Wright – who had been in the clubhouse for more than three hours – struck his drive out of bounds, effectively ruling himself out of the competition.

That was an unbelievably cruel way to finish his week, having played so inspiringly during regulation play.

Martin had left himself a fairly long putt and the danger of three attempts would certainly result in elimination – having been only four holes away from champion-status an hour ago.

His first putt was good and he – alongside everyone in attendance – would have expected him to roll the second in, which he couldn’t do.

Despite coming so close to victory and falling short, Martin should be exceptionally proud of his performance today and we are certain that there is plenty more to come – which is true for Wright too.

Then there were two.

Brooks actually had an excellent chance of glory during the first playoff hole, but he missed his short-ish putt, which was met with an audible groan.

During the second playoff hole – which was also the 18th – Brooks didn’t fare so well off the tee and he was left in the bunker.

He managed to pitch his approach to the front of the green but increased spin whizzed it back off the putting surface. Michael Stewart during the playoff

Stewart, having seen his opportunity rise exponentially, decided to go for the back of the green and he was safely on with an outside look of birdie – the momentum had swung.

Stewart safely two-putted, having missed his birdie attempt by a matter of inches.

Brooks, who hit a fairly decent chip into the green but produced too much cheque, had an even longer putt than the one he recently missed – but it was a similar line.

This one broke heavily right-to-left and from the moment it left his blade, it always looked like sinking – which it did.

A trip to the 10th was required; a new environment was needed to separate these two warriors.

The 10th hole at Cumberwell Park epitomises what risk and reward golf holes are all about.

Stewart decided to layup and give himself a wedge into the green; his opponent decided he wanted the spice.

Brooks found the green during regulation play and the same scenario took place during the playoff, leaving 20-foot for an eagle.

Stewart, under enormous pressure, found the green with his approach but left a long putt, which narrowly missed.

A two-putt was all that was required for Brooks, and the Midlands-based golfer gleefully two-putted for birdie and the championship.

He’s delighted about his maiden PGA EuroPro Tour title, but less so about his start-stop performance.

“I actually didn’t play that well. I didn’t have full control of the ball, but I managed my way around – that front nine is tricky, isn’t it?”

As is common in the sport of golf, the outcome is decided on the greens, and Brooks simply delivered when it mattered most.

“I holed a good putt on the 2nd and those four, five and six footers were dropping too.”

He is well aware of the difference that this win has made, with it boosting his chances of progression to the Challenge Tour.

“This victory has given me a big boost for finishing in the top 5 and I now have 10 free attempts to get one more win!”

The PGA EuroPro Tour quickly moves to the county of Essex for The PDC Championship in Support of Its Never You at the characterful Abridge Golf Club next week.

You can join us on the tour by tuning in for full coverage of the event on our social media platforms.