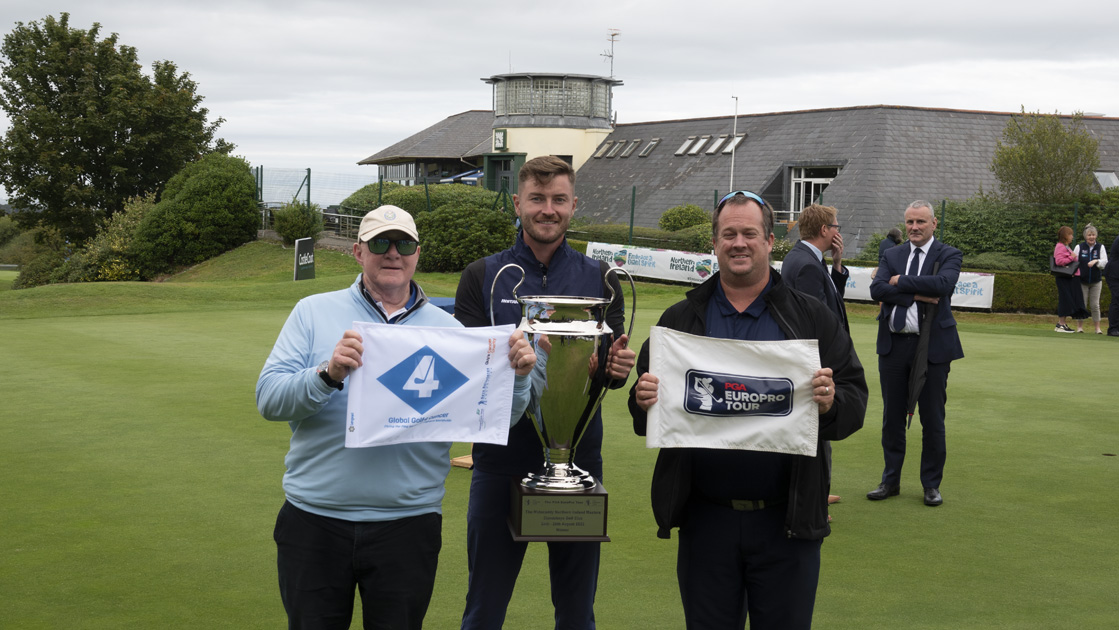 Motocaddy ambassador, Sam Broadhurst, has secured his maiden PGA EuroPro Tour title at Clandeboye Golf Club; the 25-year-old has moved to 8th in the Order of Merit.

The Motocaddy Northern Ireland Masters was finely poised heading into the final round, with Sam Broadhurst previously carving a two-stroke advantage.

Following a level par outing on Wednesday, the Englishman produced an afternoon to remember during the following day, carding 64 (-7) to post the lowest score of the week.

Ultimately, it was Thursday afternoon that ignited not only the opportunity for Broadhurst to triumph on the PGA EuroPro Tour for the first time, but the belief too.

“I was on the 8th and I chipped in there with another birdie at 10 – one of the toughest holes on the course,” Broadhurst revealed.

“I kept plugging away and birdied the par fives. When I got to 17, I knew I was five-under at the time – which was tied with Paul [Maddy] – and I then chipped in there to suddenly open up a two-shot gap.”

The final round of any golf tournament is always coated by a nerve-wracking atmosphere, with any minor mistake threatening to undo previous progress both quickly and brutally.

For any leader, it is crucial to get off to the greatest possible start, which is something Broadhurst achieved through birdieing the first hole of the day.

One Step Back, Two Steps Forward

However, it was past experience which enabled him to start so steadily; something that needed to be understood the hard way.

Standing on the 1st tee, he knew a positive start was needed to relax him into arguably the biggest moment of his career so far – but the opposite took place.

Before he knew it, he was stood on the 2nd tee having tripled the opening hole. His bid for a maiden title had unravelled rapidly.

“I had a few jokes with the guys about it last night, but I was focused on what me and my coach were working on,” he tells us after his ice-cool winning putt on Clandeboye’s 18th green.

“You can’t dwell on the past. It’s a year later and it’s a completely different me; from how I’m swinging and thinking, I obviously learnt a lot that week.”

Broadhurst could not have asked for a more contrasting start compared to Scotland, as he quickly found himself three-under thru 7 during the final round on Friday.

Stood on the 8th tee, he held a four-stroke advantage but Clandeboye’s quirkiness meant that no lead was big enough for comfortability, best highlighted by what would immediately follow.

The first time the champion turned to his driver was on the 8th, and a mis-struck shot resulted in a lengthy second.

He would fail to make par, subsequently dropping his first shot of the day, but it was his playing partner who caused more problems for his bid of champion status.

“I wasn’t really panicking, it was a case of making four and if I didn’t, I needed to understand that I was still two-under for the day and I have the lead – although Paul did manage to hole-out for a two!”

The moment he’s referencing? Paul Maddy’s unfathomable 179-yard hole-out from the right rough, which was met with loud roars by the passionate droves following the final group.

Within the space of ten minutes, Broadhurst’s four-stroke advantage had been slashed to just one.

He, Maddy and Joshua McMahon – the final member of the group – embarked on their battle for the trophy during the following holes, each looking to take advantage of the other’s mistake. If Broadhurst had not been met with victory, then his unfortunate blunder on the 15th green would have become the talking point.

All three golfers had found the green on the par-5 in two, with the trio all facing promising eagle attempts.

Whilst Maddy missed his and secured a birdie, McMahon had emphatically eagled the hole to restore the two shots he had dropped at 13 & 14.

Broadhurst left his eagle attempt short and the following putt lipped out to leave seven-foot for his par – which he duly sunk but dropped out of the solo lead for the first time during the round.

“I was more annoyed at the putt I missed than dropping out of the solo lead – I just hit it too hard – it was a smelly one really: 3-feet, breaking, and outside the hole.

“I was frustrated at that; if you can hole that, you go into the last three with a one-stroke lead.”

Of course, golf is never as simple as one envisions, which is what makes it such a dramatic and highly entertaining spectacle that is contested over hours of mental battering.

The tension could be felt as the trio made their way up the 16th fairway, with the crowd gradually increasing with every step the golfers took.

Whilst the leading duo parred the 16th, McMahon would birdie it, applying surreal pressure to Maddy and Broadhurst.

On the 7th green, McMahon had been a whopping five strokes off the lead, yet he had managed to claw himself to just one back with two to play.

The 17th has been gettable all week and it was also the scene of Broadhurst’s monumental chip-in from the previous day.

All three were positioned well to attack the flag, but with a pin located towards the rear of the green, none of them could get too aggressive as missing long would leave the most challenging of chips with little green to work with. Again, Broadhurst would lip-out at the cruellest of times, but he was quick to admit that it actually worked in his favour.

“I was pretty lucky to be honest, I hit it quite hard and if it didn’t lip-out, it was going 6/7 feet past – I was responding to the crowd, saying: ‘it’s not unlucky, it’s lucky!’”

“It is what it is, golf is golf. The ball can react in different ways. If they go in, it’s great, if they don’t then you’ve got to get on with it.”

Race to the Finish

This was the first occasion of this season wherein all three members of the final group could win the tournament after the 54th hole, so the excitement of the unknown was prevalent.

All three found the green, although Maddy had a long-range effort that dried up and missed low.

McMahon then had a good look to tie the lead, but his effort would follow a similar fate as the one before him.

Broadhurst was the last to putt and the enormous crowd immediately silenced, allowing the golfer to gather all the focus possible for the biggest stroke of his life.

A quick putt, it slowly trickled into the cup, where roars around the 18th seemingly echoed across the city of Belfast.

“I think either way, you know that putt needed to go in,” he reflects after triumphing for the first time.

“It was quite nice though, because if I did miss, I knew I was heading back down 18 for the playoff – but I wanted to finish this in regulation.”

Broadhurst has now catapulted up to 8th in the Order of Merit and sits only £1,600 away from Jack Davidson in 5th, who did not participate this week.

The PGA EuroPro Tour will be taking a brief break next week, but we return at the beautiful Macdonald Spey Valley Resort.

We would like to say good luck to all our members – and other professional golfers – who will be tackling Q-School next week.