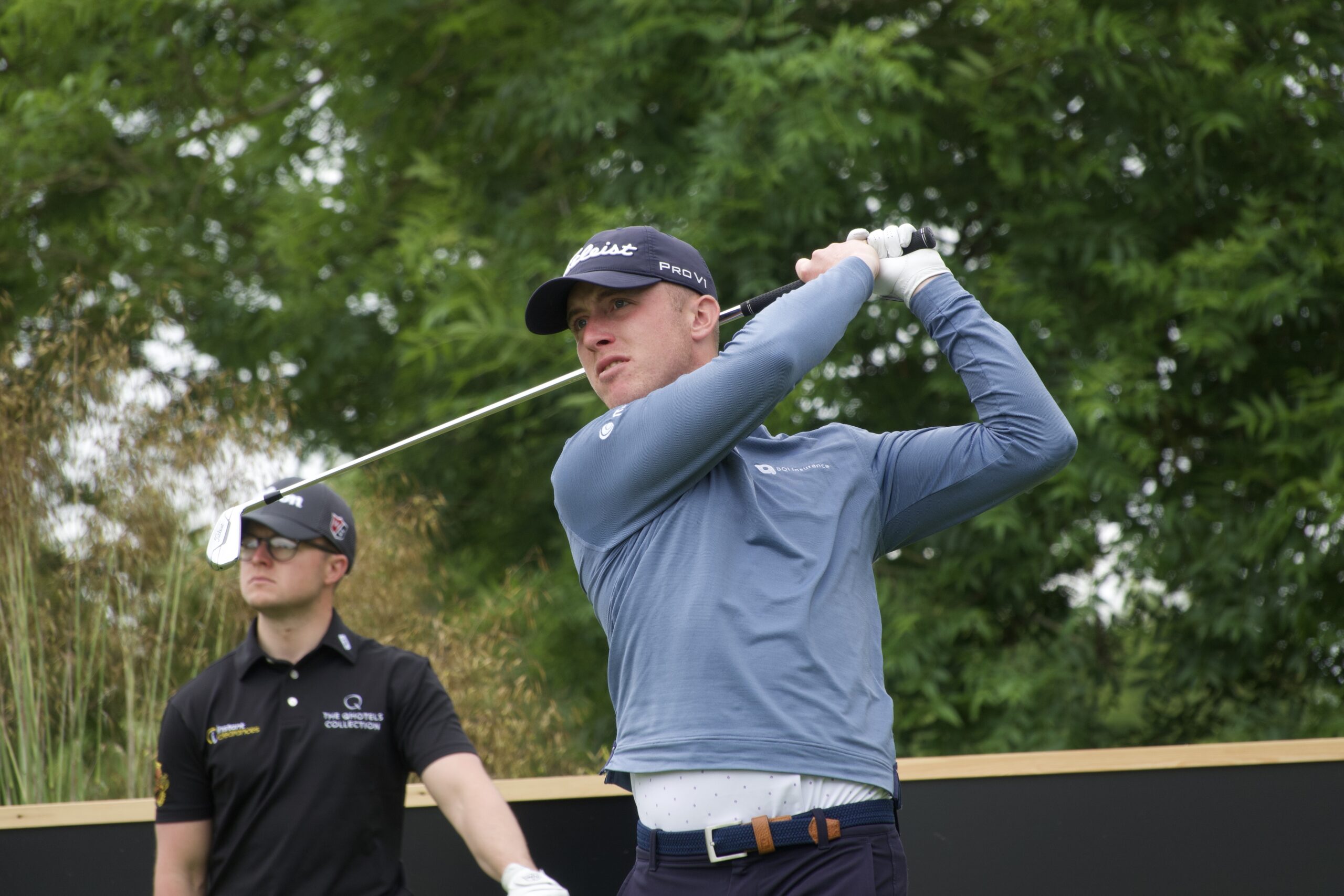 The final round of The World Snooker & Jessie May Championship is finely poised as there are eight golfers within three strokes of the lead.

Donnington Grove proved a difficult and stern test yesterday, and that was largely replicated during the second day of the tournament.

Benjamin Jones – who finished runner-up at the Cubefunder Shootout – leads the field by one after a splendid 68.

Jones was part of the afternoon groupings, but the conditions were much tamer as opposed to yesterday afternoon – where the majority of the draw battled through swirling winds.

The Englishman parred the opening two holes before dropping a shot at the par-4 3rd, which was quickly restored as he birdied the following hole.

Two more birdies were accumulated on the front nine, but a sole bogey sandwiched between the two resulted in him making the turn in 35 (-1).

He lit up the back nine however, carding three consecutive birdies on 11, 12 and 13 before handing one back at the par-4 16th.

Determined to finish strongly, yet another birdie secured on the 18th hole means that he is the solo leader heading into Friday’s showdown.

Ryan Brooks shot the lowest score of the day from the top 10 with a fantastic 67 (-5) to ensure his presence in the final group.

Brooks finished one-under yesterday, but an exceptionally strong performance has catapulted him into contention.

He experienced a turbulent first half, notching birdies on 4, 5, 6 and 9 but parting with two shots through bogeys at 2 and 8.

Brooks was far more consistent on the back nine, parring six holes and earning three further birdies on 14, 15 and 18. Due to his morning tee time, he applied early pressure to the remainder of the field, with only Jones managing to surpass his overall total.

Whilst there may only be one player ahead of him, there are a further two players matching his score and currently standing in T2 alongside the Englishman.

Michael Stewart, who also went out in the morning, looked set to light the entire course up after making the turn in an unfathomable 32 (-4.).

He compiled two further birdies at 12 and 13 which looked certain to card the lowest score of the tournament thus far, but he concluded his round with bogeys at 14 and 17.

That will undoubtedly frustrate the Scotsman, but he remains just one shot behind the leader and in a perfect position for a chase tomorrow.

Thomas Thurloway is the final player to reside in T2 heading into the final 18 holes, as he matched his score of 69 to carve an opportunity for himself.

Thurloway, who won Q-School back in October, was five-under for the day at one stage, but bogeys on 12 and 15 stagnated his progress.

Nevertheless, with only one stroke between him and Jones, he looks set to card his best finish of the season to date.

Overnight leader, Nick Cunningham, took great advantage of calmer conditions during yesterday morning, and he finished his second-round under-par too.

He concluded with 71 (-1) to bolster his overall score to five-under, and he too will be pleased chasing considering he is only two shots behind.

Cunningham played the front nine at one-under, following two birdies on 2 and 6 and a bogey between on 4.

He failed to exhibit the same rhythm as yesterday on the back, picking up two birdies but surrendering them through the same number of bogeys.

James Walker is another name that has continually resided near the top of the leaderboard this season, and he has kept that trend up impressively.

Walker started in steady fashion, picking up one birdie on the 4th before parring the remainder of the front.

He came to life during the latter half however, effortlessly reeling off three birdies in just six holes – but a bogey on 16 slightly dampened the party.

Joe Dean has strung together another promising performance, and we really should not be surprised with the skill that he possesses.

A three-under 69 ensures he is only two shots off the pace, and the Englishman only dropped one shot all day – on the par-3 17th.

Reece Thompson, who featured on the Asian Tour last week at home course Slaley Hall, returned to the EuroPro Tour with increased confidence.

After yesterday’s brilliant 69, he has further augmented his standing through another under-par performance, but he does remain three shots off the lead – he’ll need a low one tomorrow to trouble the leaders heading down the stretch.

Nick Marsh has continued his phenomenal form too, carding 69 himself to help build a platform for a charge tomorrow.

Marsh finished T2 during last week’s championship and he has been in good form across an array of professional tours.

He experienced a relatively tame opening half, notching a birdie on the 3rd before handing it straight back on the following hole.

A more assured back nine – which included four birdies and one dropped shot – results in him standing at T8 after 36 holes.

James Allan,  Thomas Curtis, Sam Crowther – who battled valiantly to card an even-par round – and Robbie Dawson all sit in T10 with a score of -3. Allan, the Cubefunder Shootout champion, has arguably been the most consistent player on tour this year, and he looks set for another excellent result in Newbury.

Crowther bogeyed the opening two holes and that could have lulled him into a sense of disbelief – but it produced the complete opposite.

A birdie on 6 looked likely to ignite a comeback, but he bogeyed the par-4 11th to make things more difficult for himself.

Two further birdies – including the 18th hole – meant he would earn an even-par score and remain in contention – albeit needing an unbelievably good showing tomorrow.

A special shoutout goes to Joshua McMahon, who shot a scintillating 66 to card the lowest score of the tournament so far.

He was sat at four-over after his opening round, and he now comfortably makes the cut and will have one eye on the top 10.

We lose 101 players through the severity of the cut, with a score of two-over good enough to progress into the final day.

The weather looks enticing for Friday’s finale, with no rain forecasted for Newbury and highs of 21 degrees.

There will be a one-tee start and the final group will tee off at 11:10am tomorrow – with the first trio starting at 08:00 am – and you can follow extensive coverage via our social media channels.