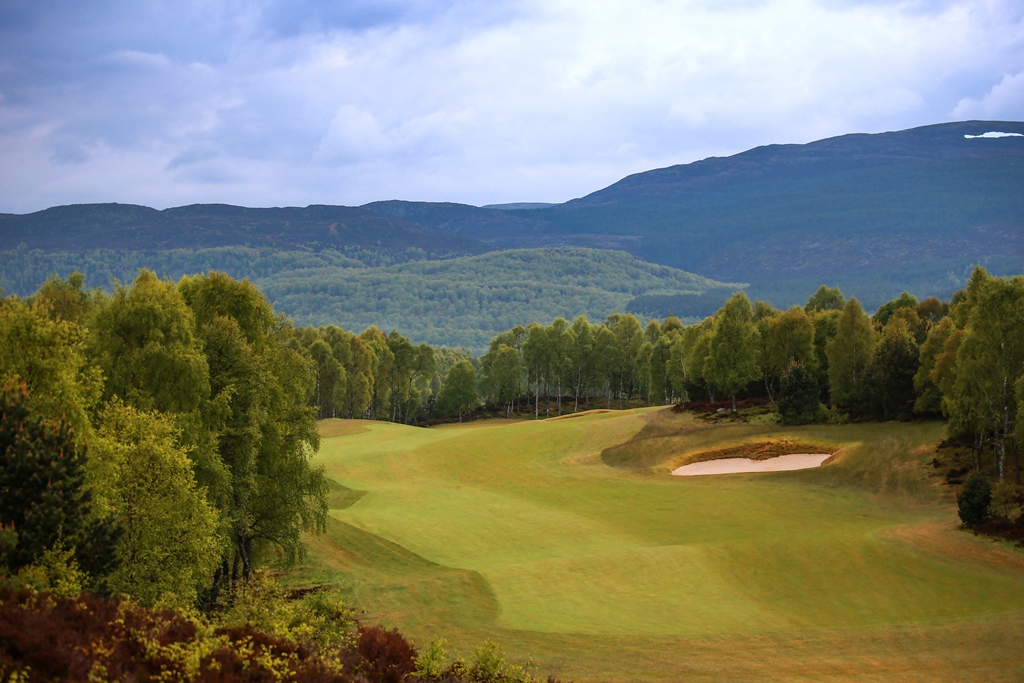 After a short break from touring, the PGA EuroPro Tour is back in action at Macdonald Spey Valley Golf Resort to kick off our two-week Scottish swing.

This will be the 13th event of the 2022 campaign, and with only two more tournaments remaining during the regular season, the race to Lough Erne intensifies from here on out.

Sam Broadhurst, champion of The Motocaddy Northern Ireland Masters, is in the field and looking to become the first player to win back-to-back titles this year.

PGA EuroPro Tour members have been treated to an array of fantastic golf courses this year, but Spey Valley could top that impressive collection.

Having been home to the Challenge Tour for ten straight years, Aviemore returns as our host this week for the first time since 2019 – where Scotsman Daniel Young was crowned champion.

We are delighted to be in Scotland, a country that boasts the most tremendous of golfing facilities seemingly around every corner.

The Spey Valley Championship routing was designed by Dave Thomas, which was rewarded by hosting the Challenge Tour from 2009 – 2018.

The River Spey provides a beautiful surrounding to what can be regarded as a very challenging layout.

Contrary to popular belief, players should be comfortable with using the driver frequently, as the course is relatively open throughout.

Thomas opted for a stern defence through plentiful bunkering and, true to his style as a designer, there are significant elevation changes – placing a premium on club selection.

The greens are in superb condition – as you would expect – and their large size indicates that the eventual winner will have to score well on the putting surfaces.

There is a collection of memorable holes, but the par-5 6th deserves special mention as it is one of the longest throughout Scotland.

Measuring 635 yards, this hole will certainly play as a three-shotter for the entirety of the field!

To summarise: Spey Valley Golf Resort exudes quality from tee to green, and it will produce the worthiest of champions come Friday afternoon.

You simply can’t keep James Allan away, someone who will be making his 11th start of the 2022 season.

Allan has all but confirmed his place on next year’s Challenge Tour, but he will be eager to earn one more victory to bow out of the EuroPro in ultimate style.

Dermot McElroy will make consecutive starts for the first time since July, with the Northern Irishman looking to wrap up his Challenge Tour card.

McElroy played tremendously to win the Cobra Puma Golf Classic at Belton Woods, but a stuttering final day at Clandeboye resulted in a T11 finish.

Brandon Robinson-Thompson has made the journey north and he will be desperate to get his season back on track following a hiatus at our previous event.

Robinson-Thompson was forced to retire himself through injury, which would have upset the golfer following an opening round of 70 (-1).

Ryan Brooks is ranked 4th in the Order of Merit, but an uncharacteristic few weeks has seen him advance slowly.

However, two missed cuts in the last three events have threatened to derail his earlier progress – can he bounce back in Scotland?

We also welcome back Jack Davidson, who did not feature in Northern Ireland due to a back injury.

The Welshman was crowned champion of The Lancer Scott Championship, which was hosted in his home country.

Pavan Sagoo will know that one more victory would be enough to guarantee his Challenge Tour card for next year – can Spey be the setting for that triumph?

Sagoo was unbelievably good at Abridge Golf & Country Club, carding 62 & 63 in rounds two and three to win in emphatic fashion.

Paul Maddy – who has racked up five top 10s this season, including the previous three events – is now the highest ranked player without a win this year.

Maddy & Sam Broadhurst’s battle for The Motocaddy Northern Ireland Masters will go down as one of the most exciting finales of the 2022 campaign.

Broadhurst will be delighted with his maiden EuroPro win, but he will be fundamentally aware that the work starts now if he is to progress from this tour.

The Englishman is 8th in the OoM and £1,400 away from Davidson – who currently occupies the dangerous 5th spot.

With only two events remaining in the regular season after Spey Valley, the race to Lough Erne is officially underway.

The top 60 in the OoM will book their place in Northern Ireland, and Allan is the only member of the field to have wrapped up his Challenge Tour card for next season.

We are in for a pulsating conclusion to what has been an ultra-competitive season on the PGA EuroPro Tour.