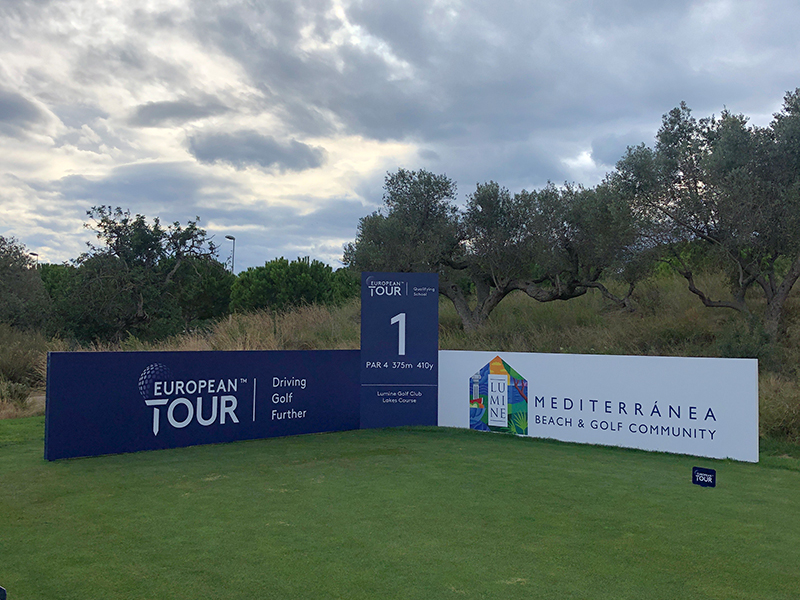 The first day of the European Tour Qualifying School final stage has been solid for most of the PGA EuroPro Tour players past and present vying for one of the 25 playing cards on the European Tour.

After the wind-battered second stage, anything would’ve been a calmer start for players taking on the Lakes Course and Hills Course at Lumine Golf Club.

Daniel Young and Tom Gandy are best placed from the current players with both going two-under on the two courses respectively for 69 and 70. Gandy bogey-free following on from his qualification on Monday at Alenda Golf. Young meanwhile finding form on ten to pull himself back from one over before getting in the groove.

Young felt happy with his opening day: “It was tricky enough today. As you can see it’s very cold. The balls not really flying too far so it was playing a wee bit longer and there was a bit of breeze out there for the most part until it died down on the last few holes.”

“I don’t think I’m gonna treat it any different to today, to be honest. They’re both good golf courses. If you play well you will score well. It’s just the case of playing good golf again and being patient. I think patience is key.”

Gandy: “It was bogey-free which is always nice. A few shots I need to work on. A few iffy ones that I got away with but missed a load of chances as well and will look to build on it tomorrow and see what we can do.”

Four familiar names from the PGA EuroPro Tour alumni list sit on three under tied for sixteenth with Minkyu Kim, Laurie Canter, Marcus Armitage, and Dale Whitnall all well-positioned after day one. Last year’s order of merit winner Dave Coupland shot 69 (-2) along with Jordan Wrisdale who sank an eagle on eighteen to move from level par.

Jonathan Caldwell, Niall Kearney, Lee Slattery, and David Dixon were all on the Hills Course signing for rounds of 71 (-1).