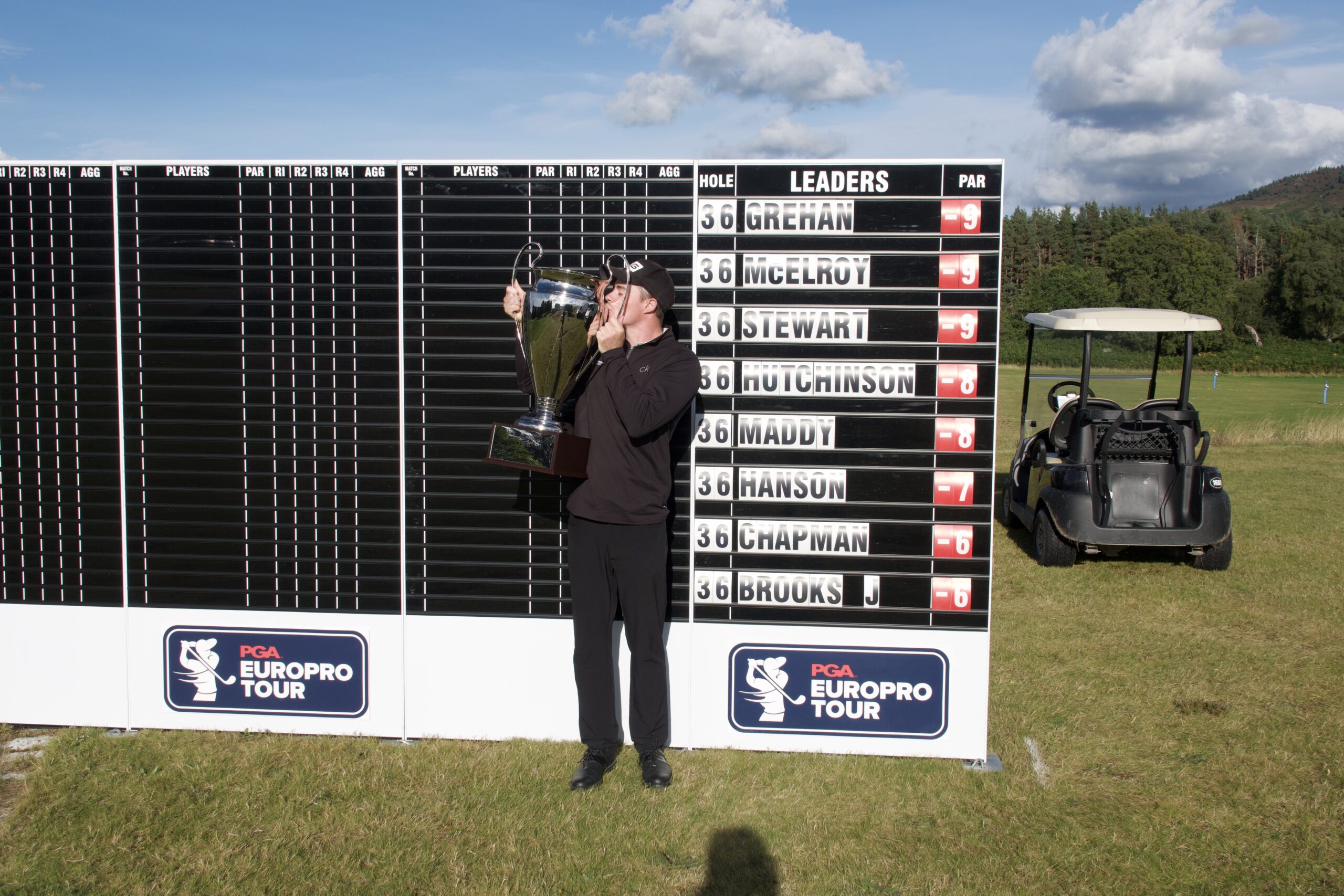 Stuart Grehan was crowned a PGA EuroPro Tour champion for the first time in his career; the golfer has moved to 9th in the Order of Merit.

Resumption of the Second Round

Due to Thursday’s torrential weather, the Spey Valley Championship was transitioned into a 36-hole event as opposed to the traditional 54.

Before play resumed on Friday morning, the tour held a two-minute silence to commemorate the death of our devoted and beloved Queen.

Understandably, the mood throughout the day was exceptionally low, with every player and member of staff feeling the great loss that the United Kingdom, along with the Commonwealth and those all around the world, endured on Thursday.

Michael Stewart had completed his second round late into Thursday, and the Scotsman held a one stroke lead with more than half the field yet to complete their second outings.

Ben Hutchinson, who resumed on the 18th, failed to birdie the closing hole – falling one shot short of Stewart’s score of -9.

It didn’t take long before the leader was in company however, as Dermot McElroy expertly birdied the closing hole to join Stewart with the clubhouse lead.

Stuart Grehan, who was only two groups behind McElroy, had made the turn in 32 (-3) before the rain delay forced the players off on Thursday.

The Irish golfer would then par the first seven holes of his back nine before a much-needed eagle was recorded on the par-5 17th to join McElroy and Stewart at the summit of the leaderboard.

Heading down the 18th hole, which played at 4.03 for the week, Grehan had earned a good birdie chance to sneak into the lead.

He left his putt short however and had to settle for a tournament score of -9 to join the two clubhouse leaders.

There was only one golfer who had an opportunity to join the leading trio, but Chris Hanson fell just short in his quest of a second EuroPro title – having triumphed back in 2006. Following the conclusion of the second round, a three-man playoff began as both Stewart and Grehan were looking for their maiden victories on this tour.

Due to the layout of Spey Valley Golf Club, the referees had agreed that the two playoff holes would be the 1st and 18th, which lie adjacent to one another.

Stewart had a fantastic opportunity of closing out the tournament on the very first playoff hole, but his four-foot putt failed to find the cup.

After three playoff holes, Grehan and McElroy found birdie to eliminate Stewart – who congratulated the pair immediately after his fate was confirmed.

The playoff would last seven holes before Grehan secured birdie at the 1st to earn his first EuroPro victory.

Having featured on the PGA EuroPro Tour during the last four seasons, Grehan was “delighted” to record his first win.

“I was quite comfortable throughout today, to be honest,” he revealed after reflecting on his victorious afternoon.

“I actually had a chance on the 18th to get the win, but unfortunately it did not happen.

“I’m just delighted to get through that seven-hole playoff; I had a few chances to win, but I am delighted to finally get over the line.”

Considering his victory has moved him to 9th in the Order of Merit, the Irishman is fully aware of the magnitude of the final three events.

“Obviously I want to try and kick on and with the Tour Championship at Lough Erne – which isn’t too far from where I’m living – I’ll have a decent look around there.

“The win doesn’t change anything; it’s just a confidence boost for me.”

With only three events remaining in the 2022 season, Grehan is hopeful that his fine form can help earn him a Challenge Tour card for next year.

“It would mean a lot to get onto the Challenge Tour; I have had a tough couple of years, and it would mean so much to get there.

“To win, even though it’s a 36-hole event, means so much – I’m very excited about what the future can bring.”

The PGA EuroPro Tour will remain in Scotland for the penultimate event of the regular season, with Leven Links playing host to the Eagle Orchid Scottish Masters.

The club was the scene of Jack South’s unfathomable 59 last year, and we look forward to hopefully seeing a score of the same ilk this visit.

We would like to thank Her Majesty The Queen for her dedicated service to the throne and our thoughts are with the Royal Family at this exceptionally sad time.