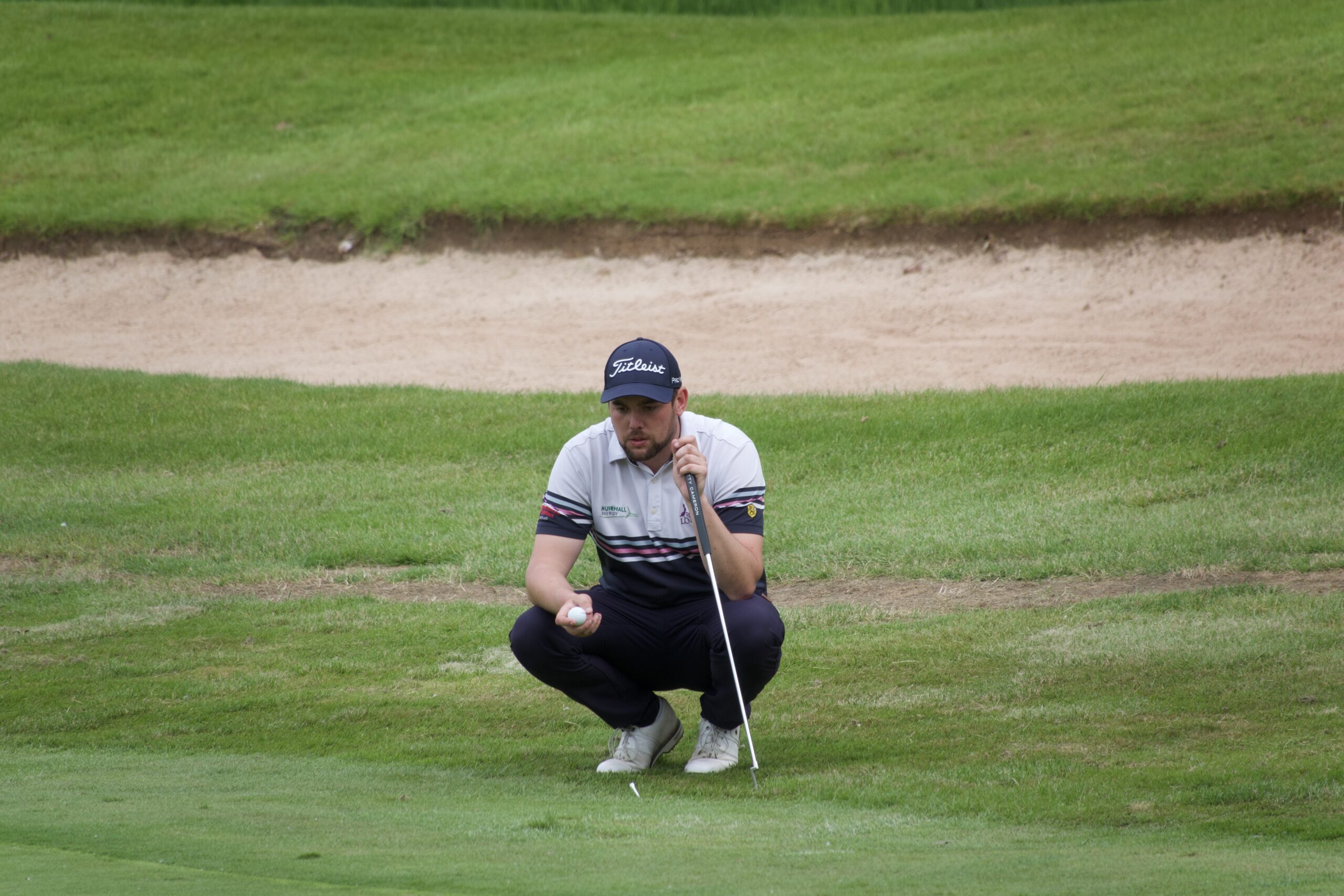 Nick Marsh followed up his phenomenal opening with another excellent performance, leading Stuart McLaren by a sole shot heading into Friday’s finale.

The weather and conditions were delightful throughout the day, which assisted a certain Scotsman with tying the course record.

Unbelievably, McLaren opened his tournament yesterday with a five-over front nine, before miraculously recovering to finish even after birdieing the final five holes.

He evidently took that momentum into today’s round, where he managed to navigate all 18 holes without dropping a single shot.

The Scotsman started the day on the back nine, and the confidence started to flow after birdieing his first hole of the afternoon.

Two further birdies resulted in him making the turn in 32 – a drastic improvement on yesterday’s opening half.

From there, birdies on 1, 2, 5 and 6 kept the scoring healthy, although he narrowly missed two putts on both 8 and 9 which could have broken the course record outright.

McLaren demonstrated his devastation at missing the putt on his final hole, but his immediate reaction highlights the kind of person he is.

After taken a moment to reflect, he swiftly turned around and gave his ball to a young boy that had followed him up the fairway.

As a consequence of his afternoon in heaven, the 27-year-old will be a member of the final group that will tackle the course on Friday.

Marsh, however, will be the man to beat after another strong display propelled him into the solo lead.

He had to share that position with four others yesterday, but he’ll be ecstatic to know that he now sits atop the throne alone – but there’s 18 more holes to negotiate yet.

The player, who represents Huddersfield Golf Club, made the turn in 34 after two birdies salvaged an earlier bogey. Three further shots were accumulated on the back nine before he finished in sour fashion, bogeying the 18th and final hole of his day.

Josh Hilleard will be the final member of the leading trio, as he matched yesterday’s impressive 67 with yet another display of consistent golf.

The Trinifold Management golfer finished 11th in last season’s Order of Merit, and after coming so close to qualification, he’ll be desperate to secure an early win this season.

Hilleard only dropped one shot all day – on the par-4 14th – which means he has only recorded two bogeys all week.

McLaren isn’t the only Scottish golfer to be present within the top 5 however, as Jack Doherty finished his day at two-under to support Wednesday’s 67.

He flexed his mental resilience as he bounced back outstandingly from two early bogeys, cutting into Marsh’s lead steadily throughout the afternoon – although a bogey on his 17th hole dampened the party and took him out of a tie for third.

The Ignis Management Championship has been close since the first groups teed off on Wednesday, and that remains true after the second round.

There are six players in a tie for 4th and they are all only three shots off the lead – meaning the winner can come from a wide selection of groups.

James Allan supported his fantastic 65 with a one-under 69 today, and it could have been a lot worse for the Essex-based man.

He made the turn in two-over after a double-bogey on the second, but a valiant display during his latter half, which included four birdies for the cost of one bogey, ensured he was not out of the tournament by any stretch.

Thomas Thurloway qualified through Q-School last autumn, and it appears he’s a name to keep an eye on as he sits just three strokes off the lead.

The 24-year-old has now carded back-to-back rounds in the sixties and if he can post a low one tomorrow, he has every chance of securing his maiden PGA EuroPro Tour title.

Will Enefer – as consistent as ever – is also part of the top 5 and he’ll be eager to take advantage of a golf course he knows exceptionally well.

The Englishman was in scintillating form during the opening two rounds of the Cubefunder Shootout, but he tailed off during his final outing.

Perhaps heading into the final round a few strokes back will force him to be aggressive from the off, which would suit this low-scoring player.

Piers Berrington had an excellent round today, which would have been even sweeter considering he finished at even yesterday.

The strategy could have been to progress past the cut, but he has now set-up an opportunity for a charge during Friday’s final round.

James Walker is still in contention too, despite posting an even-par score and failing to take advantage of the gentle conditions.

There are a further eight players one-shot back at four-under, and an astonishing score from any of them tomorrow could edge them towards the title.

The Ignis Management Championship has produced drama from the off, and we look forward to seeing who will be the worthy winner of this remarkable event.

Due to severe weather conditions, the first tee will be brought forward to 07:30 and a two-tee start will be utilised.

You can follow all the action on our social media channels as the day progresses.