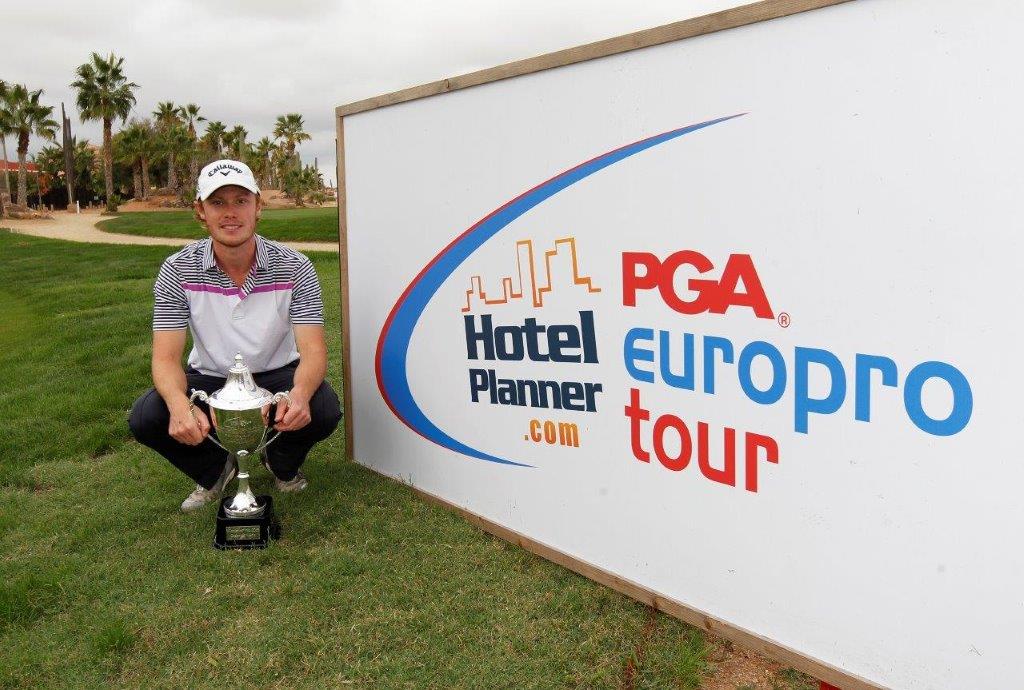 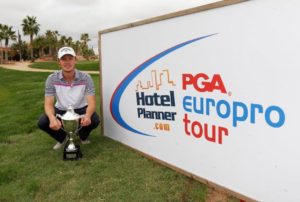 Peter Tarver-Jones won the Matchroom Sport Tour Championship by sudden-death play-off to seal an immediate return to the Challenge Tour.

The Worthing Golf Club pro shot a course record 63, nine under par, to join Richard James (Aberdovey Golf Club; 68, 70, 65) on -13 at the end of the final tournament of the HotelPlanner.com PGA EuroPro Tour season at Desert Springs Resort in Spain.

Despite a difficult lie, Tarver-Jones (70, 70, 63) nailed his approach on the first additional hole to within four feet and held his nerve to take the title, and a £20,000 winner’s cheque which propelled him to second on the Race To Desert Springs Order of Merit. 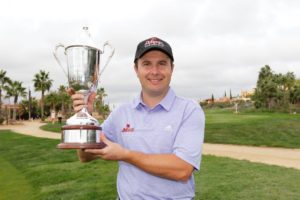 With the season now complete, the top five on the tour standings earn a category on next year’s Challenge Tour. Matthew Cort (Beedles Lake Golf Club; 70, 66, 69) was among four players tied third on -11 and consolidated his long-standing place at the top of the money list.

Curtis Griffiths (Wentworth) takes third on the rankings with James fourth and Mark Laskey (Brocket Hall/Team Honma) completing the top five, while James also won the Rookie of the Year trophy after collecting a runners-up cheque for £10,000.

However, there was agony for Billy Hemstock (Teignmough Golf Club). Having twice previously finished seventh on the Order of Merit, this year he missed out on the top five by a shade over £600.

For Tarver-Jones though, there was only delight. Two years ago he sealed promotion to the Challenge Tour via the EuroPro Tour Order of Merit but returned this summer after a disappointing 2015. But he was able to win when it mattered and closed out the season by earning an immediate return to Europe’s second tier. 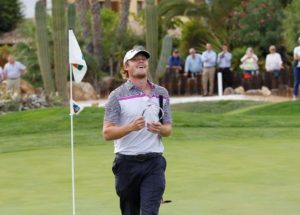 “I feel good, it was great fun today and in the play-off I just tried to have some fun. I hit a great second shot and had a good putt.

“I was aggressive today, I had no option but to be. I had played really well in the second round but didn’t hole anything whereas today I holed a few putts. I was quite a way ahead of the leaders so they had quite a few holes left but at 15 I saw the leaderboard and knew I was tied with Joe Dean for the lead.

“I was disappointed with last year on the Challenge Tour but I learnt so much, so to get the opportunity to do it again, I am really excited for it. Qualifying School is coming up as well so, who knows, if I can ride the momentum I may be able to get onto the European Tour.”

Dean (Hillsborough Golf Club) had started the final round with a three-shot lead at -12 and remained at the top of the leaderboard for much of the day. However, despite making the turn at -13 a mixed back nine of three birdies, three bogeys and a double after going out of bounds on the 15th saw his lead evaporate, and with it his chances of promotion. He joined Cort, Ashley Chesters (Hawkstone Park) and Andrew Marshall (Bawburgh Golf Club) in the four-way tie for third.

Highlights of the Matchroom Sport Tour Championship will air on Sky Sports on Tuesday, November 1 and a season review will be broadcast over the Christmas period. Highlights of all HotelPlanner.com PGA EuroPro Tour events are also available on YouTube at www.youtube.com/PGAEuroProTour.