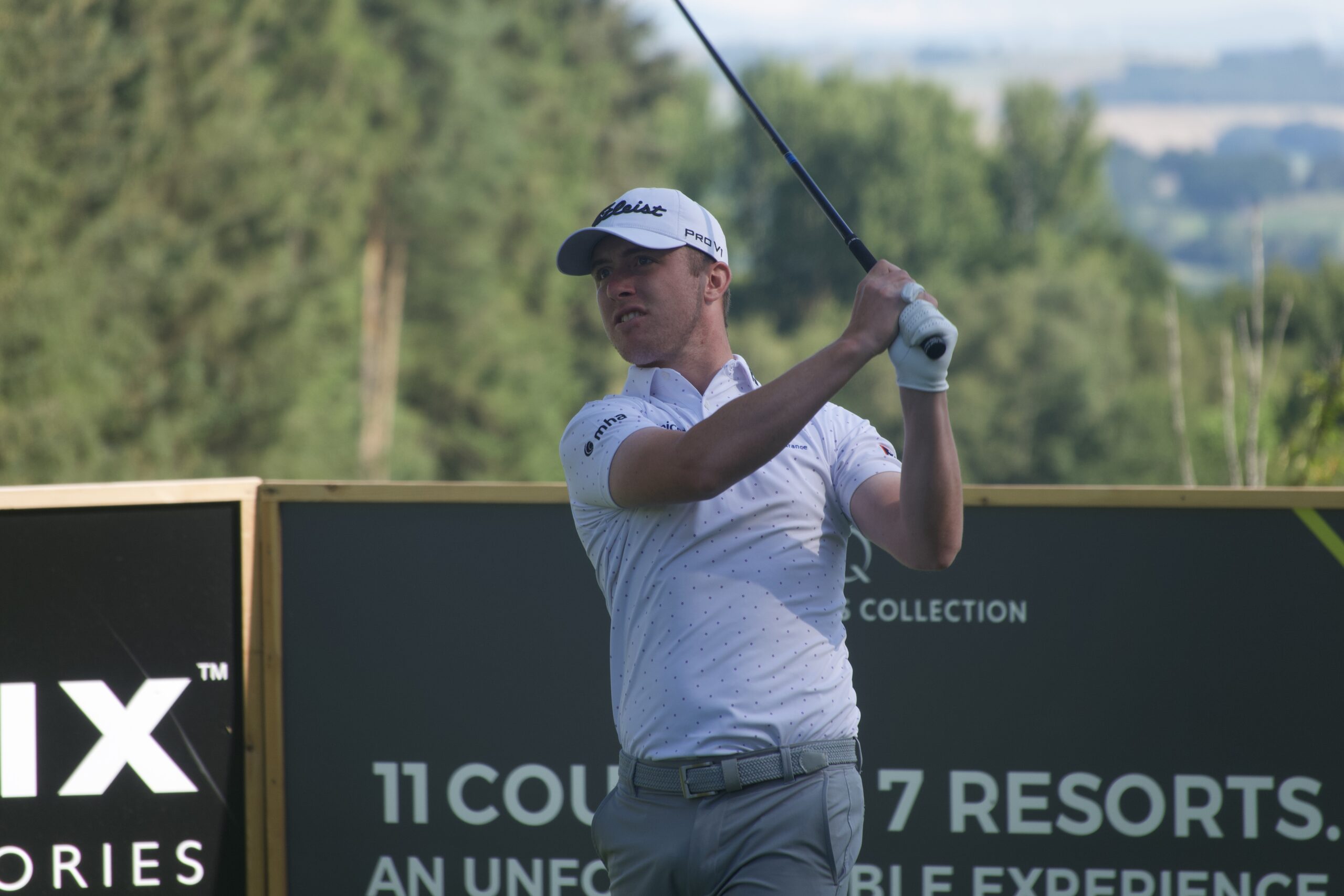 Benjamin Jones, Bailey Gill and Chris Maclean have all carded 66 (-6) to co-lead after the opening round of The QHotels Collection Championship.

Whilst it is undoubtedly playing easier in the height of summer, it’s frustratingly difficult finish ensures drama until the very last putt has dropped.

Benjamin Jones enjoyed his morning, following a fantastic 66 (-6) that propelled him into the solo lead for a large chunk of the day.

Jones’ round could have been better too, after he narrowly missed a birdie putt on 18 that would have tied the course record!

Five birdies, an eagle and sole bogey made up his card, with that drop shot not coming until the 17th hole of the day.

Bailey Gill looked set to pip Jones into the overnight lead, as he stood proudly on the 18th tee with a score of -7 that would have tied the course record.

Unfortunately, a bogey at the last dropped him back to -6 for the tournament, but he has conjured another fantastic opportunity for himself.

Scotsman Chris Maclean will be delighted with his display today, carding a classy 66 to launch himself into contention as we enter the business end of the season.

Maclean is currently 31st in the Order of Merit, but just one victory would place him nicely for Challenge Tour status next year. An unbelievable birdie on 17 – which is a significantly troubling hole – will surely be the highlight of what has been a stellar afternoon.

There is a collection of players sat at -5 for the tournament, and they include Nick Marsh, Rhys Thompson, Ryan Brooks, Antoine Santarelli and Sean Towndrow.

Towndrow has been trending in the right direction for a while now; his new-found form has rewarded him with a round of 67.

He played 16, 17 and 18 at a score of -1, which is mightily impressive considering the sheer amount of danger the finishing stretch poses.

Marsh was one of the first players to hit the course today, where he happily took advantage of the calm and still conditions.

Rhys Thompson, who represents The QHotels Collection, played terrifically too.

Thompson is an unbelievable golfer and playing on home soul could give him the edge he needs to secure his maiden EuroPro title.

Ryan Brooks is the current leader of this season’s champions, and he will be fully aware that one more victory would be enough for a top 5 finish.

Two bogeys managed to sneak their way onto the card, but a collection of seven birdies should be highly applauded. Bailey Gill featured in the final group at The Bendac Championship

He finished in style too, successfully getting up-and-down from the rough that surrounds the 18th green.

Santarelli has strung together his best round of the 2022 season, and he’ll be eager to build it further and slash the advantage of those above him.

The Frenchman started his round with a bogey, but he responded tremendously – notching six birdies that included a streak of three from 13 – 15.

Seven players are currently at -4 for the tournament and they will all be looking for bright starts tomorrow.

There are a total of 52 players under par for the tournament, whilst 64 are at level or better.

Those scores would signify an under par cut for the first time since Belton Woods, following a +2 chop at The Vale Golf & Country Club last week.

The forecast doesn’t look promising at all for the remainder of the week, with elongated spells of rain dominating the next 48 hours.

Make sure you are following us on Instagram or Facebook for daily updates of this and every tournament throughout the season.