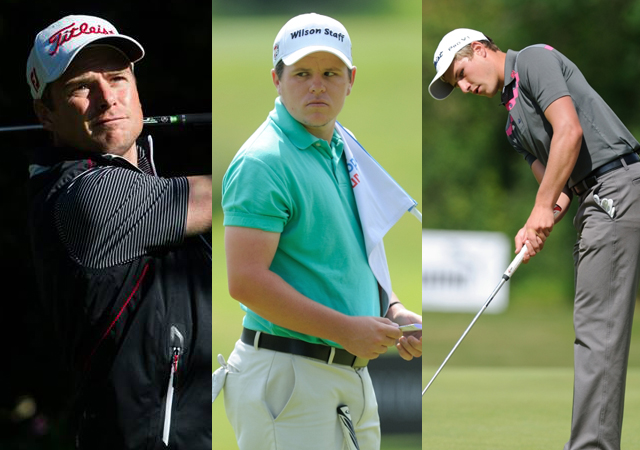 Luke Jackson, Stiggy Hodgson and defending champion Billy Hemstock share a one-stroke lead on six under par ahead of the final round of the Clipper Logistics Championship at Moor Allerton Golf Club in Leeds on Friday.

With bad weather forecast for the afternoon the final round has been moved forward to start at 7am off two tees, with the 52 players who have made the cut all within six shots of the lead. Seven golfers trail the leading trio by just one shot.

Hemstock, who beat Daniel Gavins in a play-off to win the £10,000 prize in this event last year, led by two ahead of the second round having carded a 65 for his opening round and remained at six under with a level-par round on Thursday.

The Teignmouth golfer also tasted success at Concra Wood in 2012 and is chasing his first win of the season. The 30 year old has finished tied sixth and tied fourth respectively over the last two weeks and is enjoying his best form of the summer so far.

Stiggy Hodgson (The Wisley Golf Club) claimed his first professional win at Cumberwell Park in June and has shot two rounds of 68 to take a six under total into the final round on the par-71 course at Moor Allerton.

Luke Jackson (Lindrick Golf Club) signed for a second-round 66, five under par, with a one-under from the first round complementing Thursday’s low number.

Among the seven players sharing fourth just one shot behind the leaders is Paul Bradshaw, who carded a course-record-equalling 65 to move from one over at the start of the round to five under by the end of it. The same score was recorded by Lee Clarke (-3) and James Watts (-2) in the second round.

The Clipper Logistics Championship carries a total prize fund of £40,000. A two-hour highlights package from the event will air on Sky Sports on Tuesday, August 19 and spectator entry is free of charge.