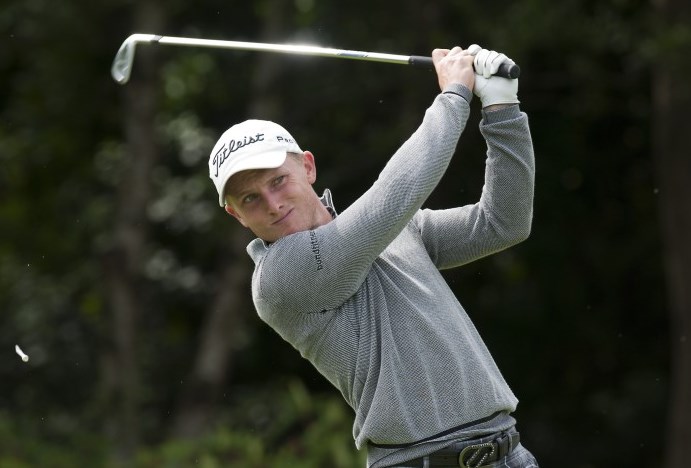 James Watts is closing in on his second HotelPlanner.com PGA EuroPro Tour win in three weeks as he takes a one-stroke lead into the final round of the Walk In My Shoes Open after a second consecutive six-under-par 66.

The Englishman won the Simpson & Marwick Championship at Royal Burgess Golfing Society of Edinburgh two weeks ago and sits on 12 under par ahead of the final round at Mount Wolseley Hotel, Spa & Country Club in Co. Carlow, Ireland.

Stuart Archibald (The Legend Alliance) is one behind after carding a second-round 65 on the par-72 course to move to 11 under, while Richard Kilpatrick’s (Banbridge Golf Club) second-round 66 will see him start the final round third on eight under, four behind the leader.

Watts (Kingsway Golf Centre) carded six birdies in his opening eight holes on Wednesday, and began Thursday’s second round on the tenth tee at six under. Birdies at 12, 14 and 16 took him to nine under and despite two bogeys on the regular front nine he was still able to sign for 66 thanks to three birdies and an eagle on the par-four fourth.

The top five on the Order of Merit at the end of the season earn Challenge Tour cards, and Watts currently lies fifth with £15,109.37 to his name. The Walk In My Shoes Open carries a £40,000 prize fund with £10,000 going to the winner, and victory would see the Hertfordshire golfer move to second on the all-important rankings.

“I hit 3-wood up the left on the fourth,” explained Watts of his eagle. “I got it to within 74 yards and holed it from there, which was lucky.

“I was a bit disappointed because both bogeys I had came from three putts so that was annoying, but I am pleased with another 66.

“Having the win under my belt I know how to deal with the TV cameras and the pressure, but it is a case of doing what I have been doing all week and seeing what happens.

“There is almost more pressure on the final round this week. If I get a second win then it is almost job done in terms of finishing top five on the Order of Merit. With the first win there was no guarantees but a second win would move you a lot closer to job done.”

The final round of the Walk In My Shoes Open will be filmed for a two-hour highlights programme to be broadcast on Sky Sports on Tuesday, August 12, with repeats the following day. Spectator entry is free of charge and live scoring can be found at www.europrotour.com.